Twenty years ago, a lamp had exactly one purpose—to illuminate the room. A typical incandescent lamp lasted a year and failure was caused by a filament or/and a glass breakage [1]. Nowadays typical lighting is based on LED technology, which is considered as durable. Due to the fact that many materials are interacting in such a lighting system, the variety of failure modes is increasing too. Therefore, design and material issues are critical to the reliability of such an electronic system. Its testing is crucial to guaranteeing a long-lasting LED system.

Particular attention must be paid to thermal management [2], as thermal stress is one of the main triggers of failure modes in electronic systems. To predict the lifetime of the LED system and to ensure its reliability, knowledge about critical failures is needed. In this paper, an LED module based on four flip-chip LEDs is investigated in terms of design for reliability and aging phenomena during a supply switching test (SST), by using thermal impedance analysis.

The investigated LED module consists of four blue flip-chip LEDs, electrically connected in series by SnAgCu (SAC305) solder joints on the copper electrodes of a printed circuit board (PCB). Here, the LED module has no underfill. The PCB was mounted on a liquid-cooled heat-sink via thermal interface material (TIM). A schematic of the flip-chip (fc) LED-module can be seen in Figure 1a. 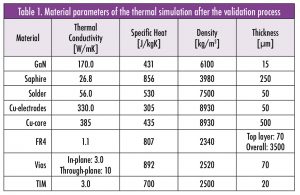 The supply switching test (SST) was applied for reliability testing. This SST leads to active heating due to the power losses occurring at the LED junction. The LED module was mounted on a heat-sink (Ts=8°C). Then a power load of 7 W was used for heating up the system to Tj=125°C with a dwell time of 30s. Afterward, the system was switched off, also with a dwell time of 30s. This cycle was repeated to investigate the aging phenomena of the LED module and to gain knowledge of the anticipated service life of the package [3]. The active current based heating of the LED module was done using a commercial programmable power supply [4]. At the beginning and during the SST, the LED modules were monitored thermally to control their thermal performance and to analyze their reliability. The evaluation of the thermal performance of the LED module was carried out by thermal impedance analysis. The experimental investigations were done by using a commercial thermal test apparatus and accompanying analysis software [5] according to the JESD 51-14 standard [6][7].

The Initial State of the LED and Its Aging Phenomena

To analyze if an LED system undergoes a significant change in its thermal performance during the SST, all the LED systems were subject to an initial control. Here, 15 LED systems underwent the SST and their initial thermal resistance of each LED system was analyzed. The initial status of dRth1-4 of all 15 LED system is shown as probability density functions in Figure 3. This analysis showed a Gaussian-shaped distribution of dRth1-4. dRth4, the attachment of the LED module to the heat-sink had the broadest range, followed by the dRth2, dRth3, and dRth1.

The thermal impedance analysis allows us to check the LED system’s performance in each SST cycle. During the SST the thermal total thermal resistance became higher with the number of cycles. This indicates that there were structural changes within the LED system. To reveal the root cause of the structural changes, the dRth sections were analyzed during the SST and material parameters of validated simulation were varied systematically. Degradation of the materials in the LED system can be assigned to changes in the heat path. This procedure is described in more detail in [11]. There, it was shown that even though the dRth4 had the largest distribution initially, it stayed nearly constant during the SST. This indicated no degradation of the mounting over the whole SST runtime. dRth1 and dRth2 increased significantly with the number of cycles, pointing out that the connection between LED chips and the PCB is mainly affected by the SST. Concluding the dRth analysis of the SST, the aging of this interconnection was found to contribute to the increase of the thermal resistance and hence the junction temperature in the fc LED module. [11]

Predicting the Lifetime of the LED Module

The magnitude of the temperature swing determines how fast the material degrades. The reliability model also revealed that there is a minor interaction between the two parameters, the initial total thermal resistance, and the power load. [14]

The reliability model for different power loads is shown in Figure 4 on the right-hand axis. The thermal resistance values with the power load of 7 W are determined experimentally; the other values with a higher power load were calculated from the model. For an LED system with an average thermal resistance of 14 K/W, it was shown that a reduction of power from 10 W to 7 W (a relative increase of 43%) causes an eight times higher number of cycles until failure. This is caused by the lower temperature swing, which results in lower mechanical stress in the interconnections and accordingly implies slower fatigue. [13]

The thermal impedance analysis was used to investigate the major reliability concern of an fc LED module. In-depth analysis of the impedance measurement, in terms of the corresponding structure functions and their dRth section, combined with thermal simulations confirmed solder fatigue as the main aging phenomena. Based on this, a reliability model for an SST was developed to describe the aging of an fc LED module. The lifetime of the package strongly depends on the temperature swing experienced during the SST, which is determined by the initial thermal resistance and the applied power load during testing.

The authors gratefully acknowledge the financial support under the scope of the COMET program within the K2 Center “Integrated Computational Material, Process and Product Engineering (IC-MPPE)” (Project No 859480). This program is supported by the Austrian Federal Ministries for Transport, Innovation, and Technology (BMVIT) and for Digital and Economic Affairs (BMDW), represented by the Austrian research funding association (FFG), and the federal states of Styria, Upper Austria, and Tyrol.

Lisa Mitterhuber is working as a senior scientist in the department of materials for microelectronics at the Materials Center Leoben in Austria. She studied Technical Physics at the University of Technology in Graz from 2010 to 2016. In 2019 she got her Ph.D. degree in materials science at the Montanuniverstät Leoben. During her thesis she was developing a scale-bridging methodology of the thermal transport in microelectronic devices, considering both wafers as well as package level.

Julien Magnien graduated from the Karl Franzens University of Graz in 2010 with a master’s degree in physics and received the Ph.D. degree from the University of Vienna in 2015, focused on the reliability of solder interconnection technologies. Since 2015, he is working at the Materials Center Leoben in the field of reliability and lifetime modeling for microelectronic packages. The main activities compromise the development of reliability monitoring models based on temperature-sensitive electrical parameters, and parameter-driven lifetime prediction.

Elke Kraker studied physics at the University of Graz where she obtained her master’s degree in 2004. Afterward, she started her Ph.D. studies at the University of Graz focusing on opto-chemical sensors combined with organic electronics and received her PhD in 2008. In 2012 she joined the business unit “Materials for Microelectronics” of the Materials Center Leoben Forschung GmbH and works there as leader of the “Reliability and Analytics for 3D Integration & Packaging” group. The main focus lies on the development of tests and methods for material characterization in the field microelectronics, development and evaluation of reliability tests.

Lisa Mitterhuber is working as a senior scientist in the department of materials for microelectronics at the Materials Center Leoben in Austria. She studied Technical Physics at the University of Technology in Graz from 2010 to 2016. In 2019 she got her Ph.D. degree in materials science at the Montanuniverstät Leoben. During her thesis she was developing a scale-bridging methodology of the thermal transport in microelectronic devices, considering both wafers as well as package level.

Sponsored by Master Bond As advances in epoxy and silicone materials constantly evolve, manufacturers of advanced electronic systems will find that … END_OF_DOCUMENT_TOKEN_TO_BE_REPLACED