The big electronics design show was in town. Gino suggested we blow off work for the day and check it out. I was a little short on promotional pens and key chains, so I fell in with him. Gino is OK, even if he’s one of those Reliability Engineers.

The cavernous convention center was packed with flashy booths of the usual component, CAD-tool and test equipment vendors. It’s probably pointless to glamorize solder, schematics, and heat sinks, but they were certainly trying. After a couple of hours of tramping from booth to booth, I was already burned out. Then something actually grabbed my interest. 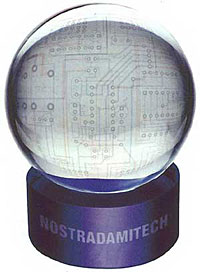 “Nostradamitech” was the logo over the entrance to what looked to be a fortune teller’s tent from the county fair. I steered Gino right inside. Sure enough, a woman in colorful costume sat behind a small table, her face lit from underneath by the glow of a large crystal ball. Gino grinned and said, “So, lady, you going to tell my fortune, or what?”The fortune teller waved her long fingers around the crystal ball and said dramatically, “I see big savings in your future, Gino. Big savings in the time and money your company spends on reliability predictions for electronic assemblies.”

From out of the shadows stepped a man in a suit, holding out a brochure. “It’s not hard,” he explained in a creepy, Boris Karloff voice, “because that happens to be what we sell: a suite of reliability prediction tools under the brand of Nostradamitech.”

I looked at the brochure. It had a picture of a circuit board surrounded by a swirl of half moons and zodiac signs. Gino said, “Not that. How did she know my name?”

The sales guy drew us deeper into the tent, where there were other displays. He said, “That’s one trade secret I think I can share.” He tapped the Attendee Badge on Gino’s chest, on which was prominently printed GINO. “You, as a Reliability Engineer, and you, a thermal analyst, both should already know that the art of making predictions for a living is less about telling people things they need to know, and more about telling people things that confirm what they already believe,” he continued.

Gino tensed as if he were about to slug the guy, but I stepped between them. This guy seemed to know what he was talking about, much more than the typical booth denizen.

“OK, what else can you tell us about ourselves?” I asked.

“You work in the center of a paradox,” he said, “Your company makes electronic hardware for a few large customers. In their purchase agreements they require you to make predictions of the reliability of your hardware, using methods defined by industry standards. Those industry standards are based, pretty much exclusively, on the methodology and theories of MIL- HDBK-217, the old parts-count, acceleration factor failure rate calculation procedure developed by the US military in the late 20th century. A whole profession has arisen to generate MIL-217 software, and another whole profession to apply it. Your customers base their quality programs on requiring you to use this reliability prediction method, and your company proves the solidness of their products by supplying the predictions. You have value to your employer because of your skill in running the prediction tools. It’s a great system that keeps the business in motion. Now comes the paradox: Everybody – your company, academia, the military that created it, your customers, even you yourselves – everybody knows that MIL-217 doesn’t actually work. Especially that part about how the failure rate of a component increases exponentially with the steady state operating temperature.”

“You mean the Erroneous Equation,” Gino added, poking me with his elbow. I recalled one of my first meetings with Gino, when I was still new with the company. I brought him my report of component temperature predictions for a new circuit board. He thanked me and tossed the report into the bottom drawer of a file cabinet. I asked him if he were planning to plug my temperatures into his reliability calculations for the board. He laughed and explained that there was no point. For all of our current products, the predictions he had made were from 2 to 20 times higher than the actual measured field failure rates. Throwing in temperature acceleration factors would just exaggerate the error between the predicted and actual failure rates.

“I see that you boys have been around the block,” the man said.

Gino’s eyes darted side to side, and then he said in a hushed voice, “Look, everybody knows the system is bogus. But we ain’t got nothing better, and since I get my paycheck from it, I sure ain’t going to be the one to blow the whistle on it.”

“Astutely put,” the salesman said, “And precisely why we have come into existence. As you say, you ain’t got nothing better. Allow me to propose that, thanks to Nostradamitech, now you do. We offer a reliability prediction package that is cheaper, faster, easier to use – and it is not based on MIL-217. We can even supply reams of carefully selected data to show that it is at least 4% more accurate than MIL-217.”

“Our name, Nostradamitech, should give you a hint. It is the technology of Nostradamus, the man who is known for predicting just about everything. We have several varieties of packages, depending on just which branch of the paranormal you put the most stock in, such as Palmistry or Numerology. Our most popular product is called StarChartMTBF, based on Astrology1,” he answered.

“ASTROLOGY?” I scoffed, “What birth dates do you put in? The build dates of the components, or the birthdays of the board designers?”

The man shrugged, but replied seriously, “Actually, it doesn’t matter. One could say that it is the holistic process of consulting the stars that determines the results, and not the mechanics of which data we enter. Another explanation is that our software carefully isolates the input data from the results, so as not to contaminate them with pre-conceived biases. Either way, the accuracy of the failure rate predictions is not reduced. It is completely up to the user to decide which astrological information should be used.”

Gino was tapping away at a demo on a laptop. “Cheaper and easier to use, eh?” he said, “But how do I get our customers to accept your results when they ask for a MIL-217-type report?”

The salesman said, “I believe your customers typically require a MIL-217 report, or equivalent. By equivalent, they mean something that is generally accepted to be as valid as MIL-217 itself. Now, according to recent surveys, more than 45% of college educated people in the US believe in the power of astrology to predict the future. 45%! That’s a much higher acceptance than for the methodology of MIL-217 itself, isn’t it? So you should have no problem substituting our StarChartMTBF report for your usual reliability estimate. It’s cheaper, easier to use, less prone to error, backed by 3,000 years of experience, and guaranteed to be no less accurate than any MIL-217 package out there.”

Gino handed him a business card, saying, “I’m hooked. Come by next week and give a demo for my whole department.”

On our way out I protested, “Gino, I thought we were working on the Physics of Failure approach for our new reliability program.”

“Yeah,” he said, “but that’s so complicated. Let’s do Chinese for lunch, OK? Maybe the fortune cookie will help me figure this one out.”

Nostradamitech is not the first organization to recommend the occult as an alternative to MIL-217. The most well-known example is “Mil-Hdbk-217 Alternate Methods” by the U.K. Ministry of Defence Principal R&M Engineer, Mr. Ian Knowles. It can be found on-line at http://www.calce.umd.edu/whats_new/1998/draft.html

Sponsored by Master Bond As advances in epoxy and silicone materials constantly evolve, manufacturers of advanced electronic systems will find that … END_OF_DOCUMENT_TOKEN_TO_BE_REPLACED