There are numerous temperature-dependent electrical phenomena insemiconductor devices that can be harnessed for the task of temperaturemeasurement. These “temperature-sensitive parameters” are commonlyknown as TSPs. There is a wide variety of TSPs with varying degrees ofdesirability. The most ideal characteristics for TSPs are described below.

Ideal Characteristics of a TSP

When considering the use of new or unfamiliar TSPs, disappointments anddifficulties can be avoided by applying the above criteria.

Many TSPs are device-type specific. The following table details somecommonly used TSPs, although this should not be considered an exhaustive list.

The most commonly used TSP is the diode junction voltage generated by a “small”,forward biased, constant current flow. It is instructive to compare this TSP tothe ideal characteristics listed above. This TSP yields a nearly linearrelationship between the voltage and temperature with a typical TSP sensitivityof about 430°C per volt (2.3 mV per °C) for silicon junctions. [1] The equation for computing junction temperature from the measured diode voltageis the familiar straight line equation:

where Tj is the junction temperature, m is the slope orderivative of the TSP expressed in terms of °C per volt, Vf isthe diode forward voltage and T0 is the ordinate-intercept or offsettemperature. This calibrating equation permits the computation of Tjfrom a measured Vf once the calibrating parameters, slope, m, andtemperature offset, T0 have been determined.

Within a production lot of “identical” devices, the slope(temperature-to-voltage derivative) is nearly constant for most device types. Generally, only the offset temperature (intercept) varies among “identical”devices. (Figure 1). This variability can be eliminated by adjusting the offsettemperature on a device-by-device basis using the known, pretest roomtemperature as a calibration data point. This procedure is often referred to as”one-point recalibration” and reduces the need for complete devicecalibrations to only the first device of a specific type tested. (Figure 2).

The device calibration for the diode voltage TSP is specific to the chosen “small”forward-biased current, commonly termed the “sense current”. Based onthe second ideal TSP criterion, above, this sense current should not generatesignificant heating in the junction and thereby artificially elevating thetemperature to be measured. Although smaller sense currents generate less selfheating, smaller sense currents are not always better. Two lower limits applyto the selection of sense currents.

Generally, 1 milliamp sense currents are used for all except powersemiconductor devices where sense currents of 10 or 20 milliamps are common. Asilicon junction passing 1 milliamp typically drops about 0.6 Volts andtherefore dissipates about 0.0006 watts as an integral part of the temperaturemeasurement. A typical ceiling for junction-to-ambient thermal resistances isabout 500 °C per watt yielding an insignificant upper limit in the artifactof 0.3 degree at 1 milliamp. Given this, 1 milliamp is the most justifiable andwidely used sense current for low power devices. For power semiconductors, 10milliamps is common although with an even smaller artifact ceiling. Actuallyestimating the artifact for any given test situation is beneficial for sensecurrent selection.

Once a TSP has been chosen, the relationship between the electrical entity(usually voltage) and temperature must be determined through a process known as”device calibration”. Device calibration involves forcing thesemiconductor to a known temperature and then measuring the TSP voltageassociated with that temperature. This procedure typically involves anisothermal dielectric bath, although an oven with a heat sink can be used. After performing this procedure over a span of temperatures, an equationrelating temperature and voltage can be derived to express this data. Thus the”calibrating equation” expresses the TSP and essentially renders thecalibrated device a temperature sensor. The most accurate method of devicecalibration implements numerous calibration temperatures, chosen to evenly spanthe range of semiconductor operating temperatures.

One vitally important aspect of device calibration is the determination ofaccuracy and the typical error bounds for the temperature measurement. Theseerrors stem from three sources: 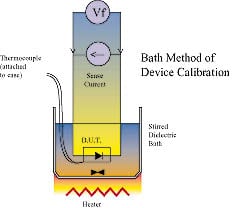 During device calibration, data should only be taken once thermalequilibrium has been reached by the device within the calibrating environment. Since the device under calibration is only heated by the minute self heatingartifact generated by the sense current, the outside surface of the device willnearly equal the internal temperature of the semiconductor once equilibrium withthe environment has been reached. Prior to this condition, the calibrationenvironment (bath liquid) must remain steady for a sufficient period of time. The waiting time then for equilibration from the outside to the inside of thedevice is determined by the heat capacity of the device and the thermalresistance between the device junction and the calibrating medium. A stirredliquid bath provides an excellent calibration medium to minimize this waitinginterval. Generally, the larger the component under calibration, the longer thewaiting interval. These considerations are essential to controlling systematicdevice calibration errors.

Measurements of thermal impedances and resistances associated with packagedsemiconductor devices can be performed by measuring the junction temperatureresponse to a measured heat dissipation from within the semiconductor. Thisprocedure is termed “device characterization”. The electrical methodof junction temperature measurement can be used to measure transient and steadystate thermal behavior. Although the utility of steady state thermalmeasurements is well established for predicting junction temperatures, thesubstantial value of transient thermal measurements is commonly overlooked. Transient thermal measurements can uniquely differentiate the internal thermalperformance of complex thermal packages. [2] This insight is essential todetermining the best approach for package enhancement and improvement.

Figure 4 illustrates the application of the diode voltage TSP tocharacterization of a rectifier diode. Nearly all functional devices utilize ascheme similar to this where the heating power is alternately switched with thetemperature sensing current. The device cannot be both heated andtemperature-sensed simultaneously since a heating current and sense currentcannot exist at the same time in one device. To overcome this, an electronicswitch with extremely brief transitions operates between these two functions andcan effectively capture the junction temperature before significant die coolinghas occurred. For more information on testing functional devices, seereferences [3,4].

Figure 5 illustrates the thermal die test method. Thermal test dice arespecifically designed for thermal characterization of integrated circuitpackages. They are available in a variety of sizes and are popular for packagecharacterizations since both heating and temperature sensing can be performedsimultaneously without the need for rapid switching. Care must be taken toensure that the thermal test die size and die attachment matches that of theintended functional die application. Due to this matching problem, active orfunctional dice are often used as the ultimate test vehicle for componentthermal characterization.

The use of the electrical method for junction temperature sensing has someof the critical details of implementation that ultimately determine the accuracyand overall success of the method. Once some understanding and experience hasbeen gained, it offers a powerful and accurate tool for thermal characterizationof semiconductor components.

Sponsored by Master Bond As advances in epoxy and silicone materials constantly evolve, manufacturers of advanced electronic systems will find that … END_OF_DOCUMENT_TOKEN_TO_BE_REPLACED