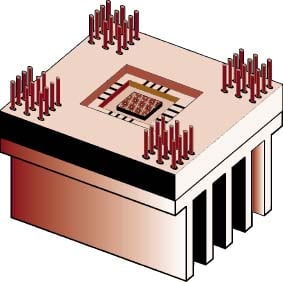 The exposed surface area of many of today’s high powered electronic packagesis no longer sufficient for the removal of the heat generated during normaloperation. Heat sinks are a commonly-used, low cost means of increasing theeffective surface area for dissipating heat by means of convective air cooling.While the use of a heat sink lowers the fluid-side thermal resistance, it alsointroduces an interface resistance across the contact formed between itself andthe package case. Under some circumstances, this contact resistance can besubstantial, impeding heat flow and reducing the overall effectiveness of theheat sink. Figure 1 depicts an electronic package heat sink assembly whichwould typically be joined by plastic or metal spring clips around the perimeterof the assembly.

The subject of thermal resistance at interfaces between aluminum heat sinksand ceramic packages has been discussed by Lee [1], de Sorgo [2], Latham [3] andEarly et al. [4]. These articles primarily report test results for jointresistance as a function of contact pressure for various interface types. Theinterfaces examined in these works involve either bare surfaces (air filled) orjoints where the interstitial gap is filled with a material layer containingdispersed thermally conductive fillers. Interstitial material layers currentlyused by the industry, as described by de Sorgo [2], include thermal greases,thermally conductive compounds, elastomers, and adhesive tapes. 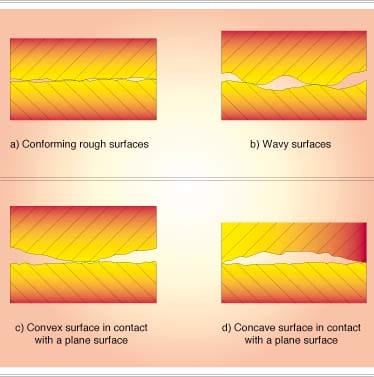 The objective of this article is to illustrate how to calculate the thermaljoint resistance for the interface formed by two conforming, rough surfacesshown in Figure 2a, as a function of contact pressure for the low pressurerange, between 0.035 and 0.35 Mpa (5 and 50 psi), commonly encounteredin microelectronic applications (Latham [3]). Peterson and Fletcher [5] verifiedby experiments in vacuum that the following models, which were originallydeveloped for metal-to-metal contacts, give very good results when used topredict the contact conductance at interfaces formed by metals (invar, kovar andalloy 42) and mold compounds (polyset 410B and 410C, MG25F-LMP and MG45F-04) atthe interface temperature range: 20 °C to 70 °C and the interfacepressure range: 0.5 to 5.0 MPa. This work will focus primarily on barejoints, although an example where the interface material is treated as a liquid,such as in the case of a thermal grease, will also be considered. Interfaceswith thermal compounds or elastomeric sheet materials will be shown to be verydifficult to model and will be discussed in general terms only. Thenon-conforming wavy, convex or concave interfaces depicted in Figures 2b, 2c,and 2d, respectively, are exceedingly complex to model and therefore will not beconsidered here. Since radiation heat transfer at most interfaces is negligibleor non-existent, it will not be included in this analysis.

The thermal joint conductance, hj, of the interfaceformed by two conforming, rough surfaces is given by the following simple modelproposed by Yovanovich [6] and further described and used by Antonetti andYovanovich [7], Yovanovich and Antonetti [8], an and Yovanovich [9].

where ks is the harmonic mean thermal conductivity ofthe interface:

the effective mean absolute asperity slope of the interface m, asshown in Figure 3, is given by:

, alsoshown in Figure 3, is the effective RMS surface roughness of the contactingasperities:

The contact pressure is P and Hc is thesurface microhardness of the softer of the two contacting solids. Themicrohardness is in general complex because it depends on several geometric andphysical parameters, such as the Vickers microhardness correlation coefficients.

The surface asperity slope is frequently not given. In this case the meanabsolute asperity slope can be approximated by the correlation equation proposedby Antonetti et al. [10]:

which was developed for the surface roughness range:

The gap conductance, hg, is given by the approximationof Yovanovich [6]:

where kg is the thermal conductivity of the gap substance. Theeffective gap thickness Y, shown in Figure 3, can be calculatedaccurately by means of the simple power-law correlation equation proposed byAntonetti and Yovanovich [7]: 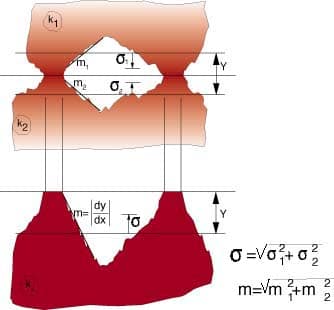 The gas parameter M accounts for rarefaction effects at hightemperatures and low gas pressures. This gas-surface parameter depends on thethermal accommodation coefficients, the ratio of specific heats, the Prandtlnumber, and the molecular mean free-path of the gas. Song and Yovanovich [11]present correlation equations for the calculation of the accommodationcoefficients for several gases as a function of the gas temperature. Thiscomplex gas-surface parameter depends on gas pressure and temperature accordingto the relationship:

Although the conforming rough surface model presented in the previoussection was developed for bare surfaces, it can also be applied to interfaceswith thermal grease. By assuming that the grease behaves as a liquid and fillsall gaps between the contacting asperities, the existing model can be used bysubstituting M = 0 and the thermal conductivity of the grease into thegap conductance relationship. However, when solid interstitial materials areused, such as thermal compounds, elastomers or adhesive tapes, the jointconductance problem becomes much more complicated. As shown in Figure 4, theuse of a solid interstitial material introduces an additional interface to theproblem. 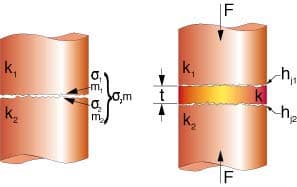 Figure 4. Thermal conductance across an interfacewith and without an interstitial material

Using thermal resistance concepts, the overall joint conductance for thisproblem is determined by the series combination:

where hj,1andhj,2 refer to the jointconductance between each of the contacting surfaces and the interfacial materialand t andk are the average thickness and thermal conductivity of the layer.Completing this analysis requires characterization of the relevant surfaceparameters, such as the slope, roughness and microhardness, for the variousinterstitial materials. In addition, for elastomeric materials the layerthickness t is not constant but instead depends on the contact pressure.Additional research needs to be done before a model can be developed to addressthis complex phenomenon.

The aforementioned models will be used to calculate the joint resistancesfor the interface formed by an aluminum 6063-T5 aluminum heat sink and Al2O3alumina package. The thermal conductivities of the heat sink and ceramicpackage are k1 = 201 W/m·K and k2= 20.9 W/m·K respectively. The harmonic mean thermalconductivity of the interface is ks = 37.85 W/m·K.Since the microhardness of the aluminum alloy is 1094MPa, which is much less than that of the alumina, it will be used tocompute the contact parameters. Based on a surface roughness for flycutaluminum of

1= 0.4 µ m and a surface roughness for ground alumina of

2 = 1.3µ m, the effective surface roughness of the interface is calculatedas

= 1.36 µm.Since the surface slopes are not given, Eq. (6) will be used to calculate thefollowing values: m1 = 0.139, m2 =0.0865, respectively. The effective surface slope of the interface is thereforem = 0.164. The thermal and physical properties of air, helium andgrease presented in Table 1 will be used in the gap conductance model.

In Figure 5 the joint thermal resistances, whose units are cm 2-°C/Ware plotted against the nominal contact pressure over the pressure range: 0.007

0.35 for several cases. The bare joint resistances with air or helium presentin the gap are shown. The effect of a thermal grease of thermal conductivitykg = 0.20 W/m·K is also shown in Figure5. 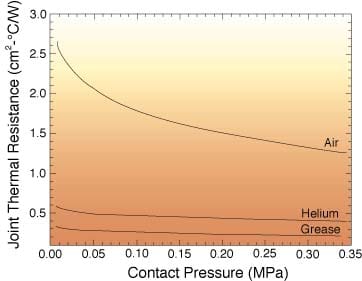 The correlation equations which have been used are based on conforming roughsurfaces with interstitial substances which perfectly wet all portions of thesurfaces which form the gap. Any non-flatness will result in interfaces withlarger gaps which will have larger joint resistances. If the interstitialsubstance does not perfectly wet the contacting surfaces, this will alsoproduce a more thermally resistive interface. The proposed models andcorrelation equations therefore correspond to the best thermal joints which havethe smallest joint resistances.

The use of other interstitial materials, such as thermal compounds,elastomers or adhesive tapes, has been shown to increase the complexity of thejoint conductance problem significantly. In order to successfully model thisproblem, extensive research into characterizing the surface properties and layerthicknesses for the various interfacial materials is required.

3. Carol A. Latham, Thermal Resistance of InterfaceMaterials as a Function of Pressure, Electronics Cooling, Vol. 2, No. 2,September 1996, p. 35.

A practical formula for air-cooled boards in ventilated enclosures

Sponsored by Master Bond As advances in epoxy and silicone materials constantly evolve, manufacturers of advanced electronic systems will find that … END_OF_DOCUMENT_TOKEN_TO_BE_REPLACED

Statistical analysis is needed because data always have some degree of uncertainty; a value that we determine from a single measurement, or … END_OF_DOCUMENT_TOKEN_TO_BE_REPLACED