The readers of “Electronics Cooling” are familiar with the reasons why the junction to ambient thermal resistance [1],

JA, is an inadequate description of the thermal performance of an integrated circuit. Likewise, you realize that vendors cannot continue to state the integrated circuit will work at a specified ambient temperature (55°C, 70°C, 85°C, or 125°C) as device power levels increase. When an ambient temperature is specified without any other qualifying environmental conditions, the integrated circuit manufacturer must have a significant safety margin. What is needed is a more accurate description of the thermal performance.

JB. The junction-to-board thermal resistance and its test method are defined.

The two resistor thermal model is derived from a paper by Jim Andrews [2]. A slight simplification of this model [3] is shown in Figure 1. The integrated circuit package is modeled as a junction-to-board and a junction-to-case thermal resistance. The heat loss to the air from the package is modeled as the case-to-ambient thermal resistance. The environment of the board is represented in this model as a battery representing the board temperature rise above the ambient temperature, TBA. The board temperature rise is caused by both the power dissipation in the integrated circuit being modeled and by the power dissipation of other components on the board. 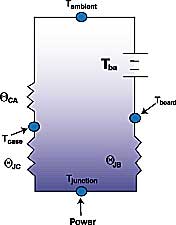 By solving this resistor network for the junction-to-ambient thermal resistance,

JA, as shown in Equations 2 and 3, one finds that

JA can be expressed as a constant term,

JA as a function of the TBA/P.

To demonstrate the range of validity of the model, 272 27×27 mm PBGA and 208 28×28 mm plastic QFP packages were measured on multilayer thermal test boards with a heater pad on the bottom of the board at two power levels in the packages, two power levels in the heater pad, and at air flow between natural and 4 m/s forced convection. All data fit a straight line with about 10% scatter.

The determination of the values to be used for junction-to-board and junction-to-case thermal resistance are being developed in the JEDEC JC15.1 standards committee [4]. Until an improved standard is available for

JC, the recommended specifications are MIL STD 883D, Method 1012.1 [5] or SEMI G30-88 [6]. Both specifications agree that the junction-to-case thermal resistance should be measured from the junction to an “isothermal surface” obtained by placing the package on a copper cold plate (“infinite heat sink”). Unfortunately, the method of measuring the “case” temperature is inadequately defined. Both specifications assume that no correction for parasitic heat loss is required. With no heat sink, the effective thermal resistance from the top of the package to the air is usually high enough to mask minor errors in the effective junction-to-case thermal resistance. With a heat sink, a metal heat sink attached to the package provides a similar thermal environment to the measurement method.

The method being considered to determine

Unfortunately, the junction-to-board thermal resistance is not a thermal resistance of the package independent of the environment; it depends on the printed circuit board. The dependence on the printed circuit board design for leaded packages is relatively minor, but the effect is larger for PBGA packages with balls that are connected to metal patterns under the die. As an example, a 272 27×27 mm PBGA package (256 perimeter balls, 16 thermal balls, 2s substrate) was simulated with different board conductivities and vias in the board with the results shown in Table 1.

As a result, the test method will require the use of the JEDEC specified 2s2p test board. For the typical application of this package, the printed circuit will have an effective conductivity and vias in the circuit board such that the junction-to-board resistance for this package design will be between 12 and 16°C/watt. This is a narrow enough range to make the value useful, although the engineer must be aware of the board design and make allowances.

The implications are that (1)

JB is a ‘figure-of-merit’ for various packages, (2) If the standard test board is a reasonable representation of the application,

JB will provide an estimate of performance in the application, and (3) The board properties and how any PBGA package is connected to the board is important. Although not scientifically precise,

JB will be a useful predictor of performance for the industry.

Before discussing how the two resistor models would be built and used, it is important to recognize that, like

JT, a junction-to-board thermal characterization parameter can be defined,

JB. The junction-to-board thermal characterization parameter is determined using the board temperature measured with a thermocouple soldered to a board trace at the same location as shown in Figures 2 and 3.

is incorporated in the JEDEC forced convection specification. Because

JB can be measured under a variety of environmental conditions and thermal test boards, it is not recommended as a replacement for

JB , which will be specified more completely to reduce variability in the results for the same package from different vendors.

JB, a package model can be constructed in a variety of thermal simulation solvers. For instance, board level solvers frequently use internal representations similar to the two resistor model [7]. Computational fluid dynamics software could use a model such as the one shown in Figure 4 [8].

The package can be modeled as a highly conductive cuboid the same size as the package. The sides of the package are modeled as adiabatic. The resistance plate on the top of the model is calculated from

JC; the resistance plate on the bottom of the model is calculated from

JB. The accuracy of this model has not been validated over a wide range of cases. Preliminary results [9] suggest an error less than 25% for calculation of the junction temperature, provided the pathological cases are avoided. I consider that useable accuracy. Cases where the model will be less accurate are the following:

1. Most heat flow is not to the board or to the heat sink. The method of determining thermal resistances assumes heat flow to one surface or the other.

2. Significant heat dissipation occurs from the package sides (ignored for this model.)

4. Adjacent heat sources are close to the package causing an asymmetric temperature field around package. Using a highly conductive cuboid for the package provides an unrealistic thermal shunt.

5. Since a cuboid the same size of the package is used for the heat source, the surface temperature and hence convective and radiation heat loss from the package are different than what would be obtained by a heat source which modeled the hot spot size on the actual package.

The compact models being developed by the DELPHI and SEED projects [10] will be more accurate and less susceptible to the problems listed above because of the greater detail contained within the model.

In addition to the individuals cited in the references, the JEDEC JC15.1 committee (especially the round robin participants: Bruce Guenin, Chia-Pin Chiu, and Zeki Celik) and my colleagues at Motorola (Vance Adams, Dave Billings, Zane Johnson, Shailesh Mulgaonker, Koneru Ramakrishna, and Roger Stout) and Mike Eyman have contributed substantially to the concepts discussed in this paper.

3. S. Mulgaonker and H. Berg, “Thermal Sensitivity Analysis for the 119 PBGA – A Framework for Rapid Prototyping,” Proceedings of the 45th IEEE ECTC, Las Vegas, May 1995.

4. JEDEC JC15.1 is a committee of JEDEC standardization organization of EIA. Published specifications are available at http://www.jedec.org.

Sponsored by Master Bond As advances in epoxy and silicone materials constantly evolve, manufacturers of advanced electronic systems will find that … END_OF_DOCUMENT_TOKEN_TO_BE_REPLACED