Since their introduction, multilayer printed circuit boards have provided a significant benefit to the thermal management of IC packages. As is widely recognized, the power and ground planes in these boards function as fins and spread the heat beyond the package footprint and enhance heat transfer to the air. Heat can flow into these planes by conduction either through thermal vias or through the dielectric layers of the board. In either case, there is an excess temperature difference associated with heat flow from the surface of the board to the internal planes.

Quite frequently, when heat transfer from a package to a board is analyzed, the board is treated as a homogeneous solid with values of effective thermal conductivity calculated from volume-weighted averages of the conductivity of the constituent materials [1]. These calculations neglect what are here referred to as “entrance effects” in analogy to excess pressure drops that occur in fluid flow at the entrance of channels. Not including these entrance effects can lead to a significant underestimate of the thermal resistance for heat to flow from the contact region with the package to the planes of the board. These entrance effects can be calculated only by accounting for the details of heat flow into the small-scale metal structures of the PCB, namely the vias and surface traces.

This column will explore heat transfer from surface traces on a multi-layer PCB to the interior planes. It will begin with a detailed Finite Element Analysis (FEA) of the PCB to elucidate the physics of the heat flow and to generate a series of “exact” solution to the problem. It will then explore the use of analytical expressions which can be used to calculate the thermal resistance of the board, accounting for the “entrance effects” with reasonable accuracy.

For convenience, the assumed board construction will correspond, in general to that of a JEDEC-standard high-conductivity test board [3]. The model will deviate from the dictates of the standard by varying the width and thickness of the traces to explore their effect on heat transfer to the planes.

The board consists of six layers: the top metal traces, two interior planes, and three dielectric layers. Since the analysis deals only with region 2 of the board, the portion of the board that would normally be located under the package footprint is missing.

Table 1. Values of Inputs to FEA and Analytical Models. 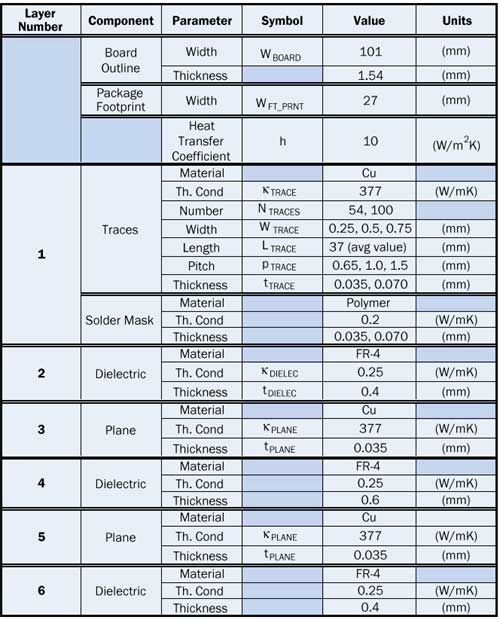 A number of thermal simulations were performed using a commercial FEA code, varying the trace width, pitch, and thickness as indicated in Table 1 [4]. Identical heat loads were applied to the cross-section of each trace exposed by the cutout at the package footprint. This approach essentially “pumps” heat into each trace as if it had been routed to the trace from a package lead (located, of course, within the package footprint). The total power, P, is simply equal to the individual heat load times the number of leads. A convective boundary condition was applied at the top and bottom surfaces of the board. Both the heat transfer coefficient, h, and the ambient air temperature, TAIR, are assumed to be constant. For the results presented here, a single value of h was used, namely 10 W/m2K. This is typical of a natural convection cooling environment.

In a few cases, the heat was injected directly into the planes at the cutout surface. This was intended to provide benchmark solutions in which there would be no entrance effects. 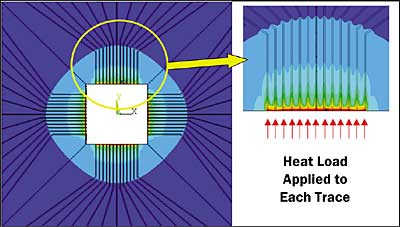 where the maximum board temperature, TBOARD,MAX was measured at the inner edge of the board.

Figures 2a and 2b provide graphs of

BOARD-AIR versus trace width for all values of trace number, pitch, and thickness investigated. Increasing any of these parameters except for the pitch increases the actual amount of copper in the traces and leads to a reduction in

BOARD-AIR by increasing the conductance of the trace layer.

BOARD-AIR. This is due not to any change in the trace conductance, but to the heat spreading mechanism within the upper plane itself. An increased pitch for the same number of traces will cause the heat to be injected into a larger area of the board, reducing the need for additional heat spreading by the plane and diminishing the associated temperature rise in the plane.Also indicated are values of

BOARD-AIR calculated by applying the heat load directly to the inner edge of the planes. These represent a lower bound for

An inspection of the temperature contours in Figure 1 suggests that each of the traces may be considered to be a fin that injects heat into the upper plane as the remaining heat flows along the trace length. Once the heat has been injected into the planes, it is well established that the resultant heat flow along the planes and into the air can be described using a circular fin model.

The calculation method to be explored here is as follows:

The following sections provide details for each step of the calculation and compare the accuracy of its predictions with those of the FEA approach.

Heat transfer from a finite linear fin to air has been discussed in a previous column [5]. This same formulism will be used in the present article, with the exception that heat will be transmitted across a constant thickness of dielectric to the board plane rather than into the air by means of convection. The concept is exactly the same. One can view the ratio of

DIELEC/tDIELEC as an effective heat transfer coefficient. (A similar use of a circular fin model in a purely conductive heat transfer situation was discussed in this column in the previous issue [6].)The sequence of equations needed to calculate

TRACE-PLANE is provided in Table 2. Equations 3.1 – 3.2 are the usual ones for applying the linear fin model.Table 2. Summary of equations to calculate the trace-to-plane thermal resistance using a linear fin model

Equations 3.3 – 3.6 are used to account for the fact that, since the trace pitch is greater than the trace width, the heat will diverge as it flows from the trace to the plane.

These equations represent the diverging part of the flow by a radial conductor and the remaining part as a 1D heat flow element. The end result of applying these equations is a calculated value of an effective thermal conductivity,

EFF-DIELEC, applied to the dielectric separating the trace from the plane. Where there is a diverging flow,

EFF-DIELEC, will be greater than

DIELEC.The advantage of accounting for the diverging flow using

EFF-DIELEC is that it allows Equation 3.1 to have the same form is it does for a 1D flow situation. The accuracy of Equations 3.3 – 3.6 has been confirmed by this author to agree with 2D FEA simulations to within 10% for a trace pitch to width ratio up to 3 to 1

The use of a circular fin to calculate the thermal resistance for the portion of a board beyond a package has been described in a previous column [5]. The sequence of equations to calculate

PLANE-AIR is presented in Table 3. In this calculation, only the conductivity of the copper planes is taken into account. The thermal role of the dielectrics can be neglected in the plane-to-air thermal calculations. All of the equations in Table 3 are standard, with one exception: Equation 4.2. This equation calculates an effective thickness for the copper plane in the model that not only includes the full thickness of the two planes, but also a term representing an area averaged trace layer thickness, determined at a specific radius from the board center.Table 3. Summary of equations to calculate the plane-to-air thermal resistance using a circular fin model

Equation 3.2 calculates this smeared layer thickness for the traces at an arbitrary value of radius equal to WFT-PRNT/2.

Figures 3a and 3b compare the results generated using the above equations with the FEA results. The error ranges from -1 to 26%. In general, the error is less than 10% for traces for which the pitch-to-width ratio is less than 2. The falloff in accuracy for ratios greater than 2 is apparently due to limitations of the simple model represented by Equations 3.3 to 3.6, used to calculate the effect of the diverging heat flow on the local heat transfer between the trace and the plane.

Entrance effects in the flow of heat from the surface of a multilayer PCB into its inner planes can account for a significant temperature rise. Those striving for accuracy in either FEA or analytical models must account for the details of heat flow into the small-scale metal structures of the PCB.

Bruce Guenin is a Principal Hardware Engineer at Oracle. He specializes in the development of advanced packaging technologies and in thermal and mechanical simulation and testing. He is an Associate Technical Editor of ElectronicsCooling Magazine and a past chairman of the JEDEC JC-15 Thermal Standards Committee and the Semi-Therm Conference.  His contributions to the thermal sciences have been recognized by receiving the Harvey Rosten Award in 2004 and the Thermi Award in 2010. He received the B.S. degree in Physics from Loyola University, New Orleans, and the Ph.D. in Physics from the University of Virginia.

Trends in Cooling of Electronics: The Use of Thermal Roadmaps
Next Post »

Sponsored by Master Bond As advances in epoxy and silicone materials constantly evolve, manufacturers of advanced electronic systems will find that … END_OF_DOCUMENT_TOKEN_TO_BE_REPLACED