In most cases today thermal design for electronic products is performed with the aid of sophisticated computational fluid dynamics and heat transfer codes. Nonetheless, there may still be occasions when a thermal designer needs a quick estimate of the external thermal resistance of a package or heat sink that does not warrant the use of powerful computer codes. In such cases an almost intuitive two-resistor heat flow model is often used.

Figure 1. Simple two-resistor thermal model for heat transfer from
a heated surface to cooling fluid flowing over the surface.

where Tf-in is the fluid inlet temperature and q is the heat flow rate. The convective thermal resistance is simply given by:

where h is the heat transfer coefficient and A is the effective area for heat transfer from the surface of the package or heat sink to air.

is the fluid mass flow rate and cp is the specific heat at constant pressure of the fluid. Accordingly, the thermal resistance of the fluid (Rfluid) is 1/2

Although the heated surface has been treated as isothermal, strictly speaking, the model presented above is only true for an isoflux surface. To understand why this is so, it is necessary to consider the temperature profiles that will result depending upon whether the boundary condition at the fluid-surface interface is one of uniform heat flux or one of uniform temperature. An example of the variation in the surface temperature and the average bulk temperature of the cooling fluid as it passes over the heated surface is shown in Figure 2 for both the isoflux and the isothermal boundary conditions. 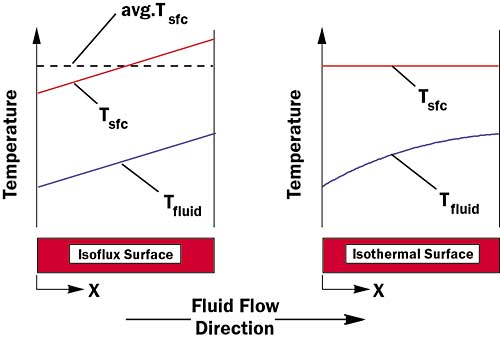 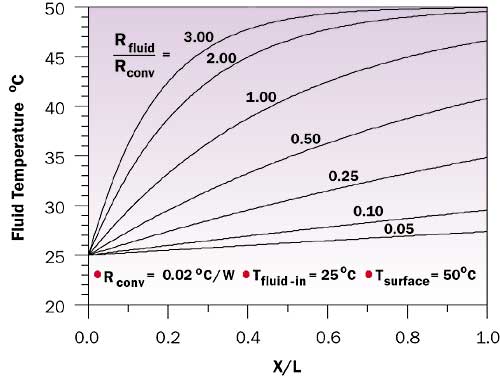 Figure 3. Effect of fluid to convective thermal resistance resistance ratio on the temperature of a cooling fluid passing over an isothermal heated surface.

Physically this is analogous to starting off with a heat sink with a given number of fins and a fixed coolant flow rate and then increasing the number of fins without attempting to increase the flow rate. As more and more fins are added the heat transfer coefficient and heat transfer area would increase, reducing the convective resistance while the thermal fluid resistance remains constant, thereby causing the ratio of the fluid to convective resistance to increase. Examining Figure 3 it can be seen that for ratios less than 0.5 the profiles are linear or very nearly linear. In this region the isoflux resistance model will give reasonable results even if the surface is isothermal. As the ratio increases beyond 0.5 the profiles become increasingly non-linear. The thermal resistance calculations based upon the isoflux model will begin to underpredict the total thermal resistance that would pertain to an isothermal surface and become progressively worse as the ratio increases.

where R* is the total thermal resistance from the isothermal surface to the fluid at the inlet. 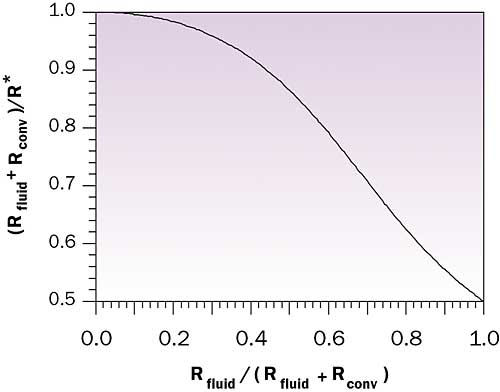 An Overview of Liquid Coolants for Electronics Cooling

Sponsored by Master Bond As advances in epoxy and silicone materials constantly evolve, manufacturers of advanced electronic systems will find that … END_OF_DOCUMENT_TOKEN_TO_BE_REPLACED

Statistical analysis is needed because data always have some degree of uncertainty; a value that we determine from a single measurement, or … END_OF_DOCUMENT_TOKEN_TO_BE_REPLACED