As increasing functionality is packaged into ever-shrinking electronics, cooling requirements rise exponentially. While there have been continued advances in high heat flux technologies [1], commercial, consumer-oriented systems continue to focus on aircooling for reasons of reliability, acoustics, cost and portability [2]. In order to support the increasing power dissipation levels, designers use high-speed fans with noise, reliability and weight penalties. It has become clear that heat exchange to the ambient has to be more efficient, i.e., better air-side heat trans fer with lower air flow rates. In this article, we present a novel air cooling technology, called a synthetic jet, which extends the envelope of air cooling by providing high heat transfer at low flow rates with low acoustics and high reliability.

Synthetic jets (SynJet™) are formed by periodic suction and ejection of fluid out of an orifice bounding a cavity by the time periodic motion of a diaphragm that is built into one of the walls of the cavity (Figure 1). During the ejection phase (the first three frames in Figure 1 from left to right), a coherent vortex, accompanied by a jet, is created and convected downstream from the jet exit. Once the vortex flow has propagated well downstream, ambient fluid from the vicinity of the orifice is entrained (the last two frames in Figure 1). The bulk of the high speed air has moved away from the orifice, avoiding re-entrainment, while quiescent air from around the orifice is sucked into the orifice. Thus, a synthetic jet is a “zero-mass-flux” jet comprised entirely of the ambient fluid and can be conveniently integrated with the surfaces that require cooling without the need for complex plumbing. The evolution of a two-dimensional synthetic jet has been studied in detail by Smith and Glezer [3]. The far field characteristics (e.g., rate of lateral spreading and streamwise decay of centerline velocity) are similar to conventional turbulent jets. The time periodic motion of the aforementioned diaphragm can be achieved using several techniques, including piezoelectric, electromagnetic, electrostatic and combustion driven pistons. The most commonly used actuator are piezoelectric and electromagnetic. For a given form factor, piezoelectric diaphragms hold an advantage in weight and power consumption, while electromagnetic actuators have better noise and reliability performance.

The principle of jet ejectors or jet pumps [4] has been known for several decades now. A jet ejector consists of a primary high momentum jet driving a secondary airflow through a channel as shown in Figure 2a. The low pressure created by a primary jet discharging into the channel results in entrainment of quiescent ambient flow, thus creating an increase in overall flow rate at the channel exit. This is also shown in Figure 2b where the computed induced flow is plotted as a function of channel width in a channel flow driven by a high momentum jet. The overall flow rate can be an order of magnitude higher than the jet flow itself, depending on the operating conditions.

In conventional jet ejectors, the primary jet is created using a pressure source ducted into the entry of a channel. The use of synthetic jets as the primary jet is an attractive option since the only input to the primary jet is electrical, requiring no plumbing and pressure supplies. During the blowing stroke of the synthetic jet, the jet ejector phenomenon is similar to steady jet ejectors, wherein a primary high momentum jet creates a low pressure in a channel resulting in the entrainment of fluid from the quiescent medium. During the suction stroke, the low pressure in the jet cavity results in additional flow entrainment, which is forced out during the
subsequent blowing stroke. 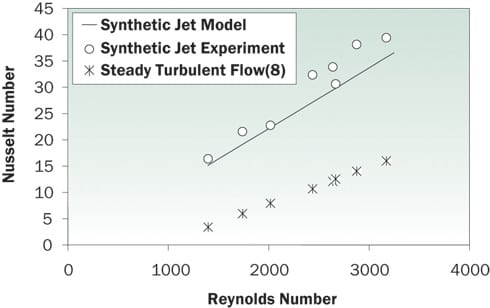 Figure 3. Comparison of predicted and measured Nusselt numbers for the synthetic
jet driven channel flow with a correlation by Gnielinski [8].

A synthetic jet based PCI-E half-height graphics card cooler was built and tested against a fan-sink solution of the same form factor (90 x 50 x 12 mm). Figure 4 shows the thermal and acoustic performance of the synthetic jet solution when compared with the fan solution. The thermal resistance was based on the temperature measured by a thermocouple embedded in the base of the heat sink and inlet ambient to the cooling module. The acoustic data were measured in a hemi-anechoic chamber at 0.5 m using a binaural head outside the computer chassis. The A-weighted sound pressure level (SPL) is significantly lower for the synthetic jet. For a given SPL-A of 40 dBA, the synthetic jet exhibits 12% better thermal performance than the fan. The synthetic jets also perform better when comparing Sones for a given performance level, which is a measure of how loud a sound actually feels to the observer. In a separate test performed at the 2°C/W performance level, the power consumption for the synthetic jet solution was 640 mW, while the power consumption for the fan solution was 672 mW.

Figure 4. Comparison of the thermal and acoustic performance of a synthetic
jet and fan-based PCI-E half height graphics chip cooler.

A 2 x 2 array of hot spots was cooled with a remote synthetic jet module measuring 50 x 50 x 25 mm, placed 300 mm away from the array. The flexible tubing forming the synthetic jets was 6 mm in diameter. The schematic of the cooling setup as well as thermal performance is shown in Figure 5. During the initial time period the synthetic jet is off while the heaters are energized to 2.5 Weach. The synthetic jets are then turned on and the temperature of the heaters, measured using thermocouples, rapidly drops to a steady-state value 2.5 times lower than natural convection. The power consumption for cooling the entire array was 308 mW. 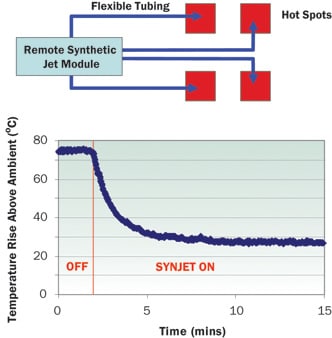 Synthetic jets can be used to improve the thermal performance as well as noise and reliability of the fan-cooled systems by reducing flow bypass as well as increasing the local heat transfer from the heat sinks. A practical application is in the case of servers where the main fans drive airflow over heat sinks that cool the main processors as well as other components in the chassis.

To test the efficacy of synthetic jet augmentation, a synthetic jet assembly was retrofitted into a commercially available Newisys 4300 quad-socket, 3U, AMD Opteron rack-mounted model server [11]. Due to the space constraints and PCB layout within the server, two of the processors have reduced-height ducted heat sinks, which conform to a 1U form factor, and two of the processors have fullheight 3U heat sinks. The synthetic jet was located directly in front of these shorter heat sinks without modifying the existing server chassis architecture.

Figure 6 shows the case-to-ambient thermal resistance of the CPUs with and without jet augmentation at different fan speeds. The inlet velocities vary approximately linearly in the range of 2.8 to 3.8 m/s over the range of fan speeds. At an idling speed of 5500 RPM the thermal resistance drops from about 0.43°C/W to about 0.35°C/W, enabling an increase in the processor power from 70 W to 85 W for a constant case temperature of 65°C. At the full speed of 9000 RPM, the performance goes from 0.33 to 0.30°C/W, enabling an increase in processor power from 92 W to 100 W at a temperature of 65°C. 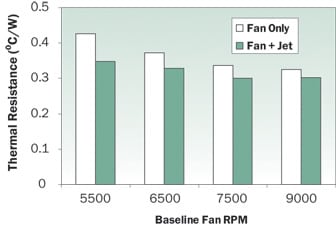 Figure 6. Decrease in thermal resistance due to the
synthetic jet augmentation.

Jet augmentation also resulted in significant reduction in the noise levels. By operating the fans at lower speed and using the jets to augment the performance of the fans, the SPL of the system was reduced by about 9 dBA. Since synthetic jets tested for reliability have shown lifetimes of several hundred thousand hours in accelerated life tests, reducing fan speeds also has the potential to improve the system reliability by reducing wear of mechanical fan components, by reducing the rate at which airborne contaminants foul the system and the fan, and by reducing vibrations on the system imposed by the fan.

The packaging flexibility of synthetic jet modules enables cooling applications that are not restricted by the design constraints of a traditional air mover technology. The ability to accurately control the directionality of a synthetic jet enables efficient heat removal from locations where cooling is needed the most. Controlled quantities of airflow can be allocated in different directions from a single synthetic jet module. This allows a designer to cool different components with different heat loads to different temperatures. Efficient local to global coupling can be achieved where part of the airflow is used to cool a targeted component, and then a secondary jet flow is established to drive the hot air out of the system using the same module. Synthetic jet cooling can be integrated into the industrial design of a product. In particular, a synthetic jet can enable unique industrial designs that are not feasible with fan cooled systems.

This article described a novel technology for airside heat exchange called synthetic jets. Synthetic jets are produced by the oscillation of a diaphragm bounding a cavity and are comprised of the ambient fluid surrounding the jet module. This method of producing an unsteady, turbulent air jet enables compact and unique form factors for cooling electronics. Also, since synthetic jets are inherently pulsating and turbulent, they produce higher heat transfer coefficients than typical fan flows and can remove heat from a surface with lesser airflow. Several case studies were presented to show the efficacy of synthetic jet cooling. Some unique cooling methodologies that are not possible with traditional fans were also described.

Sponsored by Master Bond As advances in epoxy and silicone materials constantly evolve, manufacturers of advanced electronic systems will find that … END_OF_DOCUMENT_TOKEN_TO_BE_REPLACED