The main topic of the article is how to cope with the increasing need for standardization of thermal characterization of LEDs (Light Emitting Diodes) and LED-based products (see Fig.1 showing a typical LED package). The LED-business is growing much faster than analysts predicted five years ago. Unfortunately, the progress in thermal characterization has not kept pace. Due to the lack of worldwide accepted standards a manufacturer can publish whatever thermal information he wants. It also becomes a problem for the experienced user because the published thermal data are questionable when accuracy is needed for an educated guess of expected performance and lifetime. Remarkably, the situation is not much different from the one the IC-world was facing almost 20 years ago. 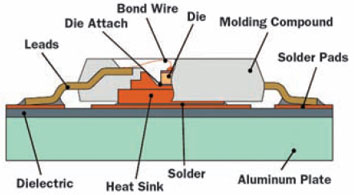 Note: this article is essentially a summary of two recent papers on LED standardization [1,2].

An end-user wants to calculate some critical temperature (usually the junction temperature, but often also a solder joint temperature). The equation that is mostly used is:

Rth j-ref is a number that is supplied by the manufacturer, the power P is usually supplied by the electronic engineer, and Tref is a reference temperature that depends on the definition. After Tjunction has been calculated, this temperature is usually compared to a specified temperature. When Tjunction is higher than Tspecification, chances are high that a redesign is requested. Obviously, one should be convinced about the accuracy of the calculated Tjunction before jumping to such a decision.

Equation (1) looks like a very simple equation, but there are many questions that could be asked questioning its accuracy. For example:

Exactly because of the many uncertainties that make equation (1) much more complex than designers think, it is possible to quote almost any value. This is the main reason for the need of worldwide standardization. However, standardization of some agreed metric as such is not sufficient. In the IC world, it appeared that the drivers for thermal characterization are quite different for manufacturers and their customers, and this situation is not very different in the LED world. It turned out that these differences were the major cause of the ‘Babylonic’ situation the IC world was facing about 20 years ago, and the LED world could profit from the lessons learned. The reader interested in IC thermal standards is referred to the JEDEC website [3].

A major breakthrough in IC thermal characterization emerging from the DELPHI project [4] was the notion that we needed a boundary between the responsibilities of the manufacturers and the end-users:

The consequence of this partition between responsibilities was that we needed a new way of thermal characterization, coined ‘Boundary Condition Independent Compact Thermal Modelling’. In short, the manufacturer should publish thermal data in such a way that the end-user could use these data for whatever application the component is intended. This philosophy is currently underlying a number of JEDEC documents [5].

Unlike two decades ago in the IC world, Tjunction of an LED is not just a performance indicator of the thermal design but plays also a major role in lighting design since all properties of the light output of an LED depend on the absolute junction temperature. This means that Eq. (1) is now an integral part of the overall design of an LED based lighting solution, resulting in changing roles of different engineering disciplines in the overall design process. The design of electrical and thermal conditions cannot be 100% decoupled as is the case in classical electronic circuit design. More information about thermal aspects of LEDs can be found in [6,7].

The most important reason for an LED designer to use thermal data is to estimate the junction temperature upon which to base any assessment of the reliability and performance of the final product. The main temperature-related problem at the device level is reduction in light output as a function of time. Because of this phenomenon, the light output may decrease to an unacceptable level before a ‘real’ irreversible failure occurs. This condition may be coined a ‘lumen maintenance’ failure. The level at which this is called a ‘failure’ should be subject to standardization.

Figure 2 shows an example of how Lumileds presents its reliability data. The Figure shows the expected lifetimes for the junction temperature at 90% confidence interval, where B50 is the time by which 50% of the population is expected to fail, and L70 means that any product with more than 30% light output degradation is classified as a failure. 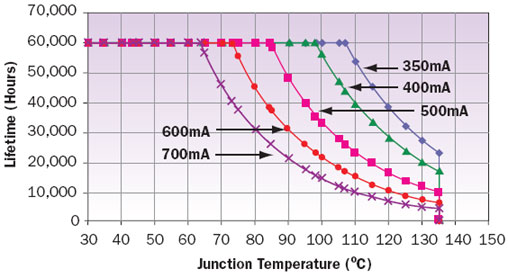 Needless to say, that all these parameters are subject to standardization because the average customer will get lost if one manufacturer quotes reliability in terms of B50, L70 and another in terms of B10, L50.

About the most important things a designer of an LED-based product wants to know are luminous flux (lumen) and efficacy (lumen/W), not only at zero hour but also over its expected lifetime. Problems with current data sheets are:

Let us focus for a moment on the definition of power and the series resistance approach.

The Definition of Power

Maybe the biggest problem today hampering a fair comparison is the lack of a standardized way of defining power. Many manufacturers define their power dissipation by the product of voltage and current, not taking into account the efficiency of the conversion from electricity into light.

In our view, any thermal resistance should only be related to the physical properties and the dimensions, and should be independent of the efficiency. The problem in practice is that the user should know the efficiency along with the total dissipated power. On the other hand, quoting a better efficiency is an important sales argument with the increasing interest in sustainability, and hence it makes sense to decouple this parameter from the physical Rth.

As shown in Figure 3, the overall efficiency (also known as wall plug efficiency (WPE), which is Poptical/Pelectrical) depends on temperature and current. That is why any metric of an LED reported in a data sheet should also be reported together with the current and temperature at which the given metric was identified. 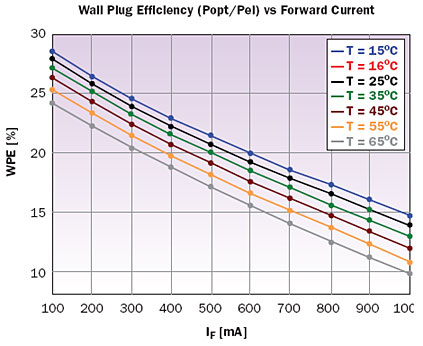 Figure 3. Current and temperature dependence of the WPE of a red Dragon LED (measured by MicReD). 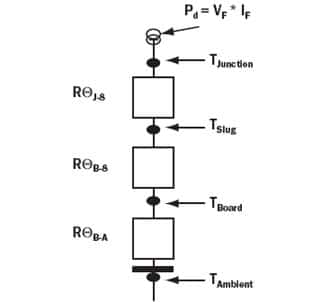 Apart from the lack of a standard way of defining power and accurate thermal data, measurements also pose a challenge. Some issues are:

Other Questions Regarding LED Thermal Standardization

Before trying to improve the data sheets and the test protocols, the following questions should be answered:

Only when we have addressed these issues does it make sense to start thinking about standardization. There are two considerations that mitigate the problems compared to the situation we faced 20 years ago with IC packages: from a thermal point of view LEDs are a lot less complex, and we have all the experience from the past including many standardization templates. On the other hand, it might turn out that thermal-only models are not sufficient for LEDs, and electro-thermal-optical multi-domain models may be preferred.

According to the authors, the logical choice for the standardization body is JEDEC because ICs and LEDs have many things in common. While for IC packages we decided to start with end-users only, it seems a better option from a timely point of view to establish a consortium consisting of all parties involved: end-users, LED manufacturers, system manufacturers (luminaries), software developers and test equipment manufacturers.

Let us summarize the main lines of thought discussed in the article.

Sponsored by Master Bond As advances in epoxy and silicone materials constantly evolve, manufacturers of advanced electronic systems will find that … END_OF_DOCUMENT_TOKEN_TO_BE_REPLACED