It is well known that incorporating graphene fillers to the base (matrix) of a composite thermal interface material (TIM) can improve the resulting thermal conductivity of the composite. In fact, the intrinsic thermal conductivity of large graphene layers exceeds that of the high-quality bulk graphite, which itself is very high: 2000 W m−1 K−1 . But most of the studies of thermal composites with graphene have been limited to the relatively low loading fractions, f ≤ 10 vol %.

In a recent paper published in ACS Applied Materials and Interfaces (“Thermal percolation threshold and thermal properties of composites with high loading of graphene and boron nitride fillers”), a research team led by Dr. Alexander Balandin, Distinguished Professor at the Department of Electrical and Computer Engineering, University of California, Riverside (UCR) found that composites made from epoxy resin containing graphene could be used to dissipate excess heat from electronic devices. In particular the researchers looked at graphene composites with a high loading fraction—up to f ≈ 45 vol %—of randomly oriented electrically conductive graphene fillers and that of another highly thermally conductive material, boron nitride fillers. The graphene fillers outperformed the boron nitride fillers in terms of thermal conductivity enhancement.

Both types of the composites revealed a distinctive thermal percolation threshold at the loading fraction fT > 20 vol %. “Percolation” relates to a theory of why something happens, in this case a critical concentration at which by adding a little bit more of conductive filler suddenly makes the thermal conductivity increase by an order of magnitude or more. 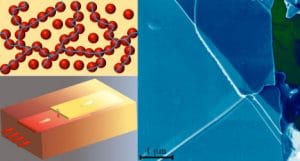 Figure 1 Top left:  Optical image of the pristine epoxy, and epoxy with the loading of 18 vol % and 19 vol % of graphene and h-BN fillers, respectively. Bottom left: Schematic of the composite with the low (left) and high (right) volume fraction of fillers. Right: Scanning electron microscopy image of the epoxy composite with 45 vol % of graphene fillers. (Source: Baladin Group, University of California Riverside)

An earlier experimental study of the thermal conductivity of single-layer graphene, conducted in 2008 (“Extremely High Thermal Conductivity of Graphene: Prospects for Thermal Management Applications” in Nanoelectronic Circuits, Applied Physics Letters 92(15):151911-151911-3 · April 2008), found that on top of its many unique electronic properties, graphene is an extraordinarily good heat conductor. Measurements revealed that graphene’s room temperature thermal conductivity, which is in the range from 3500–5300 W/mK, is much higher than that of the best bulk crystal heat conductor, diamond.

Other members of the research team included Dr. Fariborz Kargar, postdoctoral researcher and the first author of the study, and doctoral students Zahra Barani, Ruben Salgado, Bishwajit Debnath, Jacob S. Lewis, and Ece Aytan. Dr. Roger Lake, Professor at the Department of Electrical and Computer Engineering assisted with the numerical modeling of the composites.

The team concluded: “The surprising finding is that, in the high loading composites with quasi-2D fillers, the apparent cross-plane thermal conductivity of the fillers can be the limiting factor for heat conduction.” They characterized the obtained results as “important for developing the next generation of the thermal interface materials.”

Sponsored by Master Bond As advances in epoxy and silicone materials constantly evolve, manufacturers of advanced electronic systems will find that … END_OF_DOCUMENT_TOKEN_TO_BE_REPLACED

We are delighted to invite you to the 3rd Annual Automotive Thermal Management Conference that will be held in Berlin on January 21-22, 2020 Join us for an event which brings together the world’s top-class automotive

We are delighted to invite you to the 3rd Annual Automotive Thermal Management Conference that will be held in Berlin on January 21-22, 2020

Join us for an event which brings together the world’s top-class automotive leaders keen to share their knowledge and experience in the area of Thermal Management technologies.

The 3rd Annual Automotive Thermal Management Conference 2020 will give you a unique opportunity for learning about the challenges, opportunities, and emerging innovations, exchanging opinions and networking, providing valuable insights from specialists in Thermal Management field.

The AHR Expo is the world’s largest HVACR event, attracting the most comprehensive gathering of industry professionals from around the globe each year. The Show provides a unique forum where

The AHR Expo is the world’s largest HVACR event, attracting the most comprehensive gathering of industry professionals from around the globe each year. The Show provides a unique forum where manufacturers of all sizes and specialties, whether a major industry brand or innovative start-up, can come together to share ideas and showcase the future of HVACR technology under one roof. Since 1930, the AHR Expo has remained the industry’s best place for OEMs, engineers, contractors, facility operators, architects, educators and other industry professionals to explore the latest trends and applications and to cultivate mutually beneficial business relationships.

Novel Strategies for Effective End to End Thermal Management At the conference, learn about: Updates on thermal management technologies from major OEMs and Tier 1s from Europe and Asia Market evolution for

Novel Strategies for Effective End to End Thermal Management
At the conference, learn about: