As we entered the current century, consumer electronics were primarily cooled using aluminum. Over the last 15 years, flexible graphite heat spreaders have largely replaced aluminum for thermal management in many advanced consumer electronics devices where properties of being thin or lightweight are desired. There are two types of flexible graphite, natural and synthetic. Natural is typically thicker than synthetic, is less expensive, and can spread larger amounts of heat. Synthetic is typically thinner than natural, is more expensive, and spreads less heat. One layer of synthetic graphite has been the standard heat spreader in mobile phones and notebooks for several years. Many new devices now need multiple layers of synthetic to meet thermal specifications, but this can be difficult to manufacture and is expensive. New high-performance mono-layer graphite has been introduced that is thinner than natural graphite but performs like synthetic.

Until the start of the new millennium, aluminum and the various aluminum alloys were the thermal management materials of choice for heat spreading in nearly all consumer electronics devices. Plasma televisions, laptops, mobile phones, and early tablets all used the relatively cheap and abundant metal to provide any needed cooling.

From the start, the obvious downsides with using aluminum for thermal management were the weight and thickness of the metal. Tipping the scales at 30 to 70 Kg, plasma displays in the early 2000s would often tear loose from walls. To help prevent this, professional installation was often offered as an “included service” with the purchase of the display.

In the early 2000s the typical mobile phone was around 20 mm thick. Cooling, if needed, was often performed by placing hot components on a metal chassis, then using the conductive bulk of the metal to spread the heat throughout the phone. As processors and components were designed to use more power, the chassis became thicker and heavier to compensate for the increased heat load.

When the first smartphones were introduced, being thin became a desired design feature of a high-end phone. This trend rapidly extended to notebook computers, where being as thin as possible became a design requirement.

In order to keep up with the features consumers were demanding, it was clear to the industry that solutions to the weight and thickness problems of aluminum needed to be developed.

Starting in 2002, soft flexible natural graphite heat spreaders began to replace aluminum as the thermal management material of choice in plasma television displays. With a thermal conductivity up to three times that of aluminum, while only weighing a third as much for equivalent spreading, flexible natural graphite usage became widespread in displays. Based on this success, graphite spread to other devices and market categories.

Flexible graphite was first used in mobile phones in the mid 2000s. By 2015, graphite had become the standard thermal management material for all high-end smartphones. The initial smartphone models used natural graphite with thicknesses of around 100 µm, but within a few years the industry moved to synthetic graphites in the 17 µm to 50 µm range. Thinner graphites, down to 10 µm, were available, but it was found that these did not spread enough heat to be effective.

Over the last 15 years, graphite has largely replaced aluminum in most of the advanced consumer electronics devices, where being thin or lightweight is considered an important design feature. 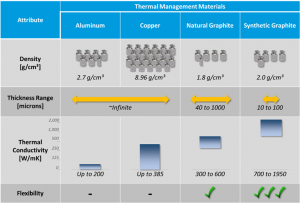 Synthetic graphite is made by graphitizing a carbon containing base material at temperatures greater than 2,500°C. Synthetic graphite is typically thin, ranging from between 10 µm and 100 µm, but its thermal conductivity is much higher, ranging from between 700 and 1,950 W/m·K. The thickness limitations of the material also limit the amount of heat it can spread, even with its higher thermal conductivity values. Previous attempts have been made to create synthetic graphite that is thicker than 100 µm, but these have been elusive. 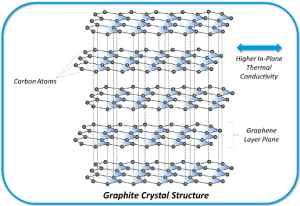 Graphite, either natural or synthetic, is composed of hundreds of thousands of graphene layers, stacked on top of each other. These graphene layers provide excellent thermal, electrical, and acoustic spreading in the plane of the material while providing reduced spreading through the thickness of the material. This results in anisotropic thermal spreading in the plane approximately 100 to 450 times more than through the plane [[i]].

Manufacturers take advantage of this unique anisotropic heat spreading property of graphite to reduce surface touch temperatures and to protect sensitive components from hot components. Metals, such as aluminum or copper, have thermal conductivities that are the same in all directions (isotropic). This makes them less suitable for these applications, since heat applied to one surface of a metal will quickly spread through to the opposite surface. 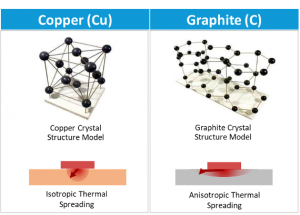 As mobile phones, tablets, and notebooks trended toward thinner and lighter form factors, many of these products moved to synthetic graphite. The industry quickly standardized on synthetic graphite that was 17 µm, 25 µm, 32 µm, 40 µm, and 50 µm thick for these applications.

As devices have become more powerful, one layer of synthetic graphite often does not spread enough heat to meet thermal specifications, yet there may not be enough thickness available for natural graphite to be used. The common approach to this problem has been to laminate two or more layers of synthetic graphite together using a 5 µm adhesive film. This allows for a heat spreader that is thinner than natural graphite while keeping the high thermal conductivity of synthetic.

As with everything having to do with thermal management, there are downsides with using this multi-layer approach. First is the cost of the raw materials. By its nature, synthetic graphite is a relatively expensive highly engineered material. Having to combine four, five, or even six layers of this material, along with multiple layers of adhesive film can make this approach cost prohibitive.

Next are the yield losses caused by the complex lamination process. The most problematic issue is the increase in the number of splices per roll. All rolled material will have some level of splices in them, even if it is only due to the end of one roll being spliced onto the next. Creating a master roll of multiple layers of graphite and adhesive film will result in an increase

in the number of splices over a single layer of material. A splice in any of the base layers will result in a new splice being required for the entire stack. These added splices must then be removed and discarded as the parts are die cut. While these splices do not affect product quality, they do have a significant impact to cost and yield. Wrinkles and air bubbles trapped between the layers as they are laminated together are also common, further adding to yield loss.

The last issue with the multiple-layer stack is the thermally inert nature of the plastics and adhesives needed to bind the stack together. In addition to making the final part thicker, each of these layers adds a thermal impedance and prevents heat from smoothly spreading through the graphite layers. 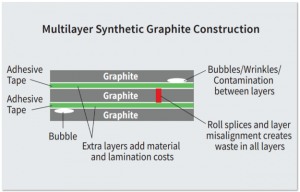 The solution to the multilayer graphite problem was to come up with a product that is a single layer, which is thinner than natural graphite, yet has the thermal conductivity of synthetic. This keeps the desired features of multilayer synthetic while having the cost advantages of a single layer.

This new product, thick monolayer high-performance graphite, is now rolling out to the market. Current thicknesses are between 70 µm and 300 µm, with thermal conductivities between 750 and 1,200 W/m·K. Initial consumer products using this material are smartphones, notebooks, and VR/AR goggles. 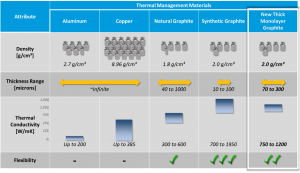 Graphite heat spreaders have become the standard thermal management material for many high-end consumer electronics devices where being thin or lightweight is a desired feature. Single layers of synthetic graphite have been considered as the standard for most high-end devices, but some devices now require more than a single layer. Producing parts out of multiple layers of graphite is expensive and difficult. To solve this problem, a new material of thick monolayer high-performance graphite has been introduced. This material avoids the costs and yield losses of multiple layers of synthetic graphite. 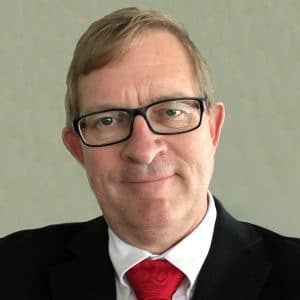 Bret A Trimmer holds a BS in Chemical Engineering and an MBA. The first twenty years of his career were spent in the semiconductor and electronics industry, holding positions in engineering, sales, and product management with Olin Microelectronics, Arch Microelectronics, FlipChip International, and Amkor Technologies. Bret joined NeoGraf Solutions (formerly GrafTech International) in 2010, where he has held positions of Applications Engineering Manager, Sales Manager, and Business Development Manager.

What Does the Future of Wireless Charging Technology Look Like?

Sponsored by Master Bond As advances in epoxy and silicone materials constantly evolve, manufacturers of advanced electronic systems will find that … END_OF_DOCUMENT_TOKEN_TO_BE_REPLACED