The previous articles in this series [1, 2] described how the mean and standard deviations of a set of data are calculated and how they can be used to estimate the characteristics of a population using the normal distribution. Since measured data typically represents only a subset of an entire population, one should recognize that the estimated mean and standard deviation values determined from a sample set are not likely to be exactly equal to the true values of the entire population. In other words, when we calculate the mean, i.e., average, of a data set, we should recognize that there is actually a range of values in which the true population mean lies – and the size of that range depends on the confidence level that we assign to our estimate. This article describes a process that can be used to determine that range as a function of the number of data points and confidence level. More generally, this outlines the overall process for linking probability distributions with confidence levels that is the basis of a variety of statistical analyses.

Z-value is defined as the difference of a value from the mean, normalized by the standard deviation. For example, with the mean of 8 and standard deviation of 0.75, a measurement of 9 would have a Z-value of (9-8)/0.75 = 1.33. The cumulative normal distribution for this value is 90.9%2; in other words, 90.9% of the population with a normal distribution would have a Z-value that is less than or equal to 1.33. This is illustrated in Figure 1 as the area under the cumulative probability curve for values of 9 and below. 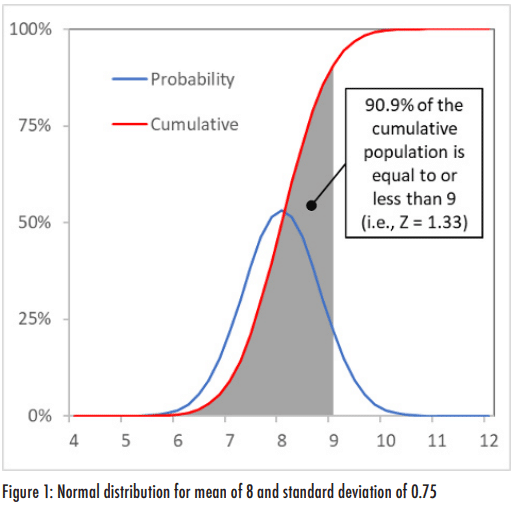 As mentioned previously, we don’t generally know the true mean and standard deviation of an entire population because we only make measurements of a subset of it. The larger the subset (the more samples we use in making our estimates), the more accurate our estimates of the true values should be. When we use a small sample size in an analysis, we can account for the additional uncertainty due to sample size by ‘flattening’ the bell curve of the standard normal distribution and increasing the size of the ‘tails’ (the areas under the curve that are far from the midpoint) using the Student t-distribution.

The t-distribution looks very similar to a normal distribution, but its specific shape depends on the number of degrees of freedom. 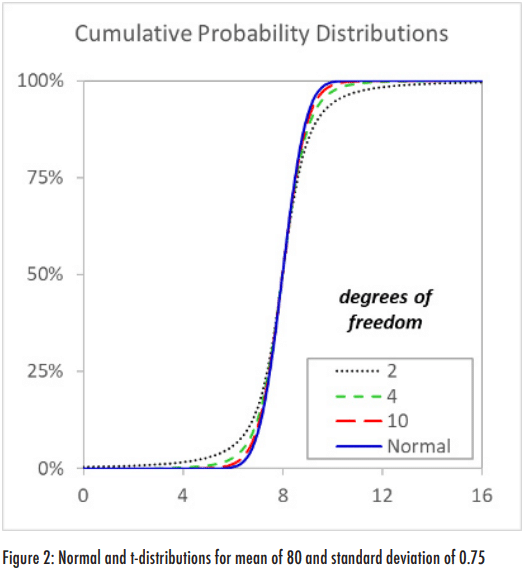 With this baseline information on distributions established, we can now describe how they are used to define what range of values the true mean of a population is based on a small number of measurements. The Central Limit Theorem is a critical component in establishing this. The Central Limit Theorem states that a population of terms (X-µ)/(σ/n1/2) tends towards being normally distributed, where X is a value in the population, µ is the mean, σ is the standard deviation and n is the number of samples used to estimate the population characteristics. This applies not only to the data, but also to the distribution that we use to assess our confidence in the mean that is calculated from a sample set.

For example, assume that 50 measurements of a heat sink show that its thermal resistance is 8°C/W with a standard deviation of 0.75°C/W. How confident can we be that the actual population mean is somewhere between 7.9 and 8.1°C/W? Using the Central Limit Theorem, we calculate a test statistic as (7.9-8)/(0.75/501/2) = -0.943. We can look this value up on a standardized normal distribution table, which shows that 17.3% of a normal population that has a mean of 0 and standard deviation of 1 will have a value of -0.943 or less3. Since the normal distribution is symmetric, we will also find that 17.3% of the population will have value of 0.943 or greater. Thus, 34.6% of the normal distribution is either less than 7.9 or greater than 8.1 and there is a confidence band of ~65% that the true mean is between 7.9 and 8.1.

Typically, we are more interested in conducting the reverse analysis – namely, what range of values corresponds to a prescribed confidence band. Also, we may not have the luxury to have a sufficient number of measurements (more than 30) to justify using a standard normal distribution, rather than a t distribution, in our calculations. The steps for determining the range of mean values correspond to a specified confidence band are shown in Table 1. This table includes example calculations for testing on ten heat sinks that again showed a mean thermal resistance of 8°C/W with a standard deviation of 0.75°C/W. The goal of the analysis is to determine the range of values that we can be 90% confident that
the true mean lies within.

In summary, the goal of the first three articles in this series has been to provide a sufficient background to allow readers to better understand future articles aimed at providing practical statistical analysis approaches. Hopefully, the articles did not achieve a ‘worst of both worlds’ status in which they included more theory than engineers might want to see and less theory than statisticians would expect. Regardless of whether they achieved that or not, with a basic statistical foundation in place we can now move on in future articles to describe tools and analysis methods for solving the types of statistical problems that engineers may encounter.

Why Chemical Compatibility Is Vital To Your Liquid Cooling System

Sponsored by Master Bond As advances in epoxy and silicone materials constantly evolve, manufacturers of advanced electronic systems will find that … END_OF_DOCUMENT_TOKEN_TO_BE_REPLACED