How the Thermoelectric Works . . .

Thermoelectrics can be used to heat and to cool, depending on the directionof the current. In an application requiring both heating and cooling, thedesign should focus on the cooling mode. Using a thermoelectric in the heatingmode is very efficient because all the internal heating (Joulian heat) and theload from the cold side is pumped to the hot side. This reduces the powerneeded to achieve the desired heating.

The hot side of the thermoelectric is the side where heat is released whenDC power is applied. This side is attached to the heat sink. When using an aircooled heat sink (natural or forced convection), the hot side temperature can befound by using Equations 1 and 2.

The heat sink is a key component in the assembly. A heat sink that is toosmall means that the desired cold side temperature may not be obtained.

The cold side of the thermoelectric is the side that gets cold when DC poweris applied. This side may need to be colder than the desired temperature of thecooled object. This is especially true when the cold side is not in directcontact with the object, such as when cooling an enclosure.

The temperature difference across the thermoelectric (

T) relates to Thand Tc according to Equation 3.

Estimating Qc, the heat load in watts absorbed from the coldside is difficult, because all thermal loads in the design must be considered. Among these thermal loads are:

All thermoelectrics are rated for Imax, Vmax, Qmax,and

Tmax, at aspecific value of Th. Operating at or near the maximum power isrelatively inefficient due to internal heating (Joulian heat) at high power. Therefore, thermoelectrics generally operate within 25% to 80% of the maximumcurrent. The input power to the thermoelectric determines the hot sidetemperature and cooling capability at a given load.

For each device, Qmax is the maximum heat load that can beabsorbed by the cold side of the thermoelectric. This maximum occurs at Imax,Vmax, and with

Tmaxvalue is the maximum temperature difference across the thermoelectric. Thismaximum occurs at Imax, Vmax and with no load (Qc= 0 watts). These values of Qmax and

Tmax are shownon the performance curve (Figure 3) as the end points of the Imaxline.

Suppose a designer has an application with an estimated heat load of 22watts, a forced convection type heat sink with a thermal resistance of 0.15°C/watt,an ambient temperature of 25°C, and an object that needs to be cooled to 5°C. The cold side of the thermoelectric will be in direct contact with the object.

To determine if this thermoelectric is appropriate for this application, itmust be shown that the parameters

T and Qc arewithin the boundaries of the performance curves.

Figures 2 and 3 show performance curves for the CP1.4-127-06L at a hot sidetemperature of 35°C. Referring to Figure 3, the intersection of Qcand 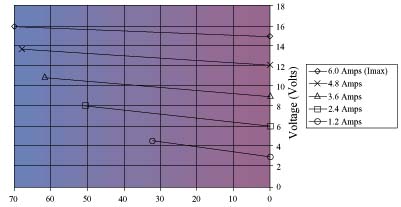 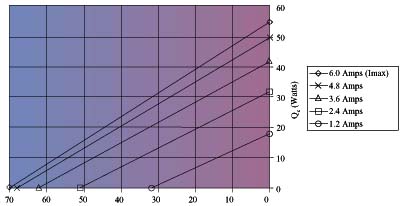 These values are based on the estimate Th = 35°C. Once thepower into the thermoelectric is determined, Equations 1 and 2 can be used tosolve for Th and to determine whether the original estimate of Thwas appropriate.

The input power to the thermoelectric, Pin, is the product of the currentand the voltage. Using the 3.6 amp line in Figure 2 for the current, the inputvoltage corresponding to

Using Equations 1 and 2, Th can now be calculated.

The calculated Th is close enough to the original estimate of Th,to conclude that the CP1.4-127-06L thermoelectric will work in the givenapplication. If an exact solution needs to be known, the process of solving forTh mathematically can be repeated until the value of Thdoes not change.

Other Parameters to Consider

The material used for the assembly components deserves careful thought. Theheat sink and cold side mounting surface should be made out of materials thathave a high thermal conductivity (i.e., copper or aluminum) to promote heattransfer. However, insulation and assembly hardware should be made of materialsthat have low thermal conductivity (i.e., polyurethane foam and stainless steel)to reduce heat loss.

Environmental concerns such as humidity and condensation on the cold sidecan be alleviated by using proper sealing methods. A perimeter seal (Figure 4)protects the couples from contact with water or gases, eliminating corrosion andthermal and electrical shorts that can damage the thermoelectric module.

The importance of other factors, such as the thermoelectric’s footprint, itsheight, its cost, the available power supply and type of heat sink, varyaccording to the application.

T by stacking as many assix or seven single stage thermoelectrics on top of each other.

Sponsored by Master Bond As advances in epoxy and silicone materials constantly evolve, manufacturers of advanced electronic systems will find that … END_OF_DOCUMENT_TOKEN_TO_BE_REPLACED