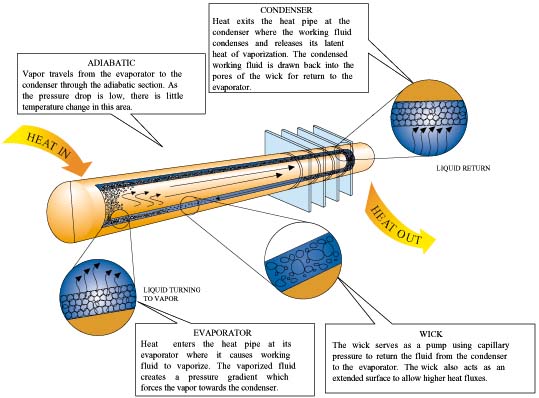 All electronic components, from microprocessors to high end powerconverters, generate heat and rejection of this heat is necessary for theiroptimum and reliable operation. As electronic design allows higher throughputin smaller packages, dissipating the heat load becomes a critical design factor. Many of today’s electronic devices require cooling beyond the capability ofstandard metallic heat sinks. The heat pipe is meeting this need and is rapidlybecoming a main stream thermal management tool.

A heat pipe is essentially a passive heat transfer device with an extremelyhigh effective thermal conductivity. The two-phase heat transfer mechanismresults in heat transfer capabilities from one hundred to several thousand timesthat of an equivalent piece of copper.

As shown in Figure 1, the heat pipe in its simplest configuration is aclosed, evacuated cylindrical vessel with the internal walls lined with acapillary structure or wick that is saturated with a working fluid. Since theheat pipe is evacuated and then charged with the working fluid prior to beingsealed, the internal pressure is set by the vapor pressure of the fluid.

As heat is input at the evaporator, fluid is vaporized, creating a pressuregradient in the pipe. This pressure gradient forces the vapor to flow along thepipe to a cooler section where it condenses giving up its latent heat ofvaporization. The working fluid is then returned to the evaporator by thecapillary forces developed in the wick structure.

There are many factors to consider when designing a heat pipe: compatibilityof materials, operating temperature range, diameter, power limitations, thermalresistances, and operating orientation. However, the design issues are reducedto two major considerations by limiting the selection to copper/water heat pipesfor cooling electronics. These considerations are the amount of power the heatpipe is capable of carrying and its effective thermal resistance. These twomajor heat pipe design criteria are discussed below.

The most important heat pipe design consideration is the amount of power theheat pipe is capable of transferring. Heat pipes can be designed to carry a fewwatts or several kilowatts, depending on the application. Heat pipes cantransfer much higher powers for a given temperature gradient than even the bestmetallic conductors. If driven beyond its capacity, however, the effectivethermal conductivity of the heat pipe will be significantly reduced. Therefore,it is important to assure that the heat pipe is designed to safely transportthe required heat load. 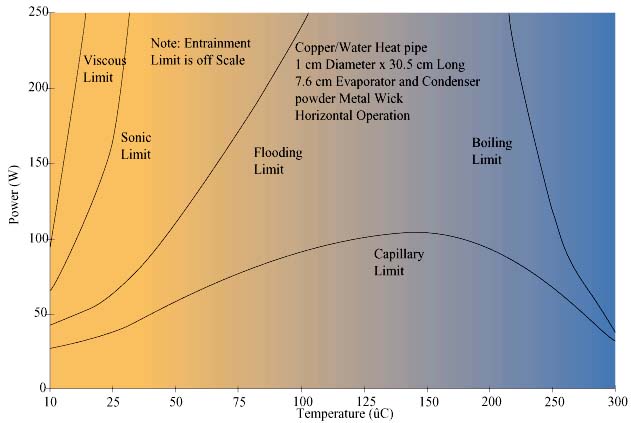 As shown in Figures 2 and 3, the capillary limit is usually the limitingfactor in a heat pipe design. 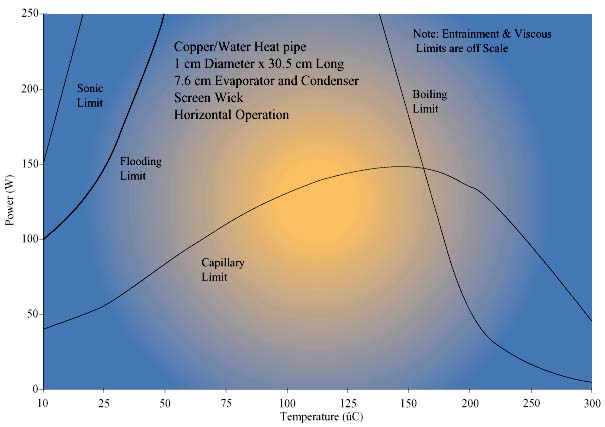 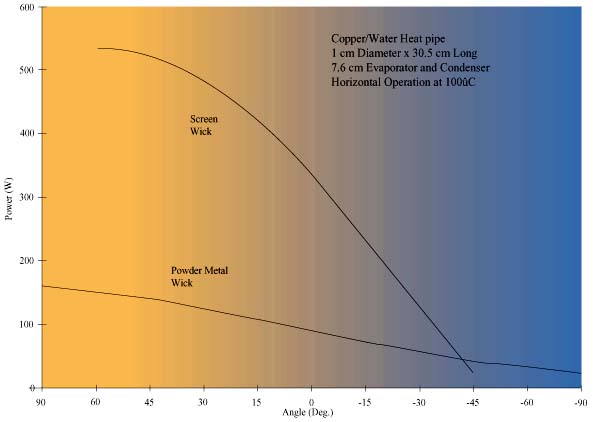 The two most important properties of a wick are the pore radius and thepermeability. The pore radius determines the pumping pressure the wick candevelop. The permeability determines the frictional losses of the fluid as itflows through the wick. There are several types of wick structures availableincluding: grooves, screen, cables/fibers, and sintered powder metal. Figure 5shows several heat pipe wick structures.

It is important to select the proper wick structure for your application.The above list is in order of decreasing permeability and decreasing poreradius.

Grooved wicks have a large pore radius and a high permeability, as a resultthe pressure losses are low but the pumping head is also low. Grooved wicks cantransfer high heat loads in a horizontal or gravity aided position, but cannottransfer large loads against gravity. The powder metal wicks on the oppositeend of the list have small pore radii and relatively low permeability. Powdermetal wicks are limited by pressure drops in the horizontal position but cantransfer large loads against gravity.

T at a given design power. As the heat pipe is a two-phase heat transfer device, a constant effectivethermal resistance value cannot be assigned. The effective thermal resistanceis not constant but a function of a large number of variables, such as heat pipegeometry, evaporator length, condenser length, wick structure, and workingfluid.

Figure 6 shows a power versus 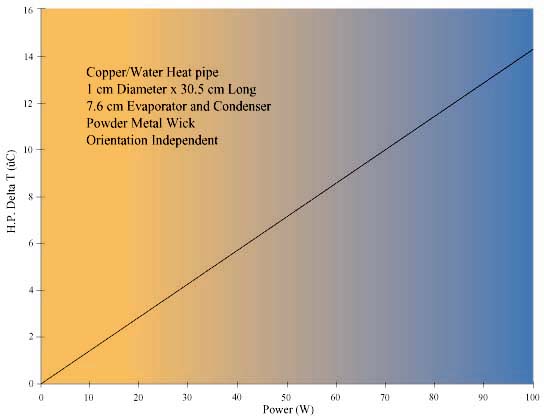 The detailed thermal analysis of heat pipes is rather complex. There are,however, a few rules of thumb that can be used for first pass designconsiderations. A rough guide for a copper/water heat pipe with a powder metalwick structure is to use 0.2°C/W/cm2 for thermal resistance at theevaporator and condenser, and 0.02°C/W/cm2 for axial resistance.

The evaporator and condenser resistances are based on the outer surface areaof the heat pipe. The axial resistance is based on the cross-sectional area ofthe vapor space. This design guide is only useful for powers at or below thedesign power for the given heat pipe.

It is important to note that the equations given above for thermalperformance are only rule of thumb guidelines. These guidelines should only beused to help determine if heat pipes will meet your cooling requirements, not asfinal design criteria. More detailed information on power limitations andpredicted heat pipe thermal resistances are given in the heat pipe design bookslisted in the reference section.

Fan assisted heat sinks require electrical power and reduce battery life.Standard metallic heat sinks capable of dissipating the heat load are too largeto be incorporated into the notebook package. Heat pipes, on the other hand,offer a high efficiency, passive, compact heat transfer solution. Three or fourmillimeter diameter heat pipes can effectively remove the high flux heat fromthe processor. The heat pipe spreads the heat load over a relatively large areaheat sink, where the heat flux is so low that it can be effectively dissipatedthrough the notebook case to ambient air. The heat sink can be the existingcomponents of the notebook, from Electro-Magnetic Interference (EMI) shieldingunder the key pad to metal structural components. Various configurations ofnotebook heat pipe heat sinks are shown in Figure 7. 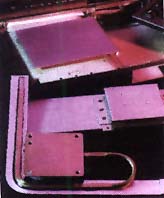 Typical thermal resistances for these applications at six to eight watt heatloads are 4 – 6°C/watt. High power mainframe, mini-mainframe, server andworkstation chips may also employ heat pipe heat sinks. High end chipsdissipating up to 100 watts are outside the capabilities of conventional heatsinks. Heat pipes are used to transfer heat from the chip to a fin stack largeenough to convect the heat to the supplied air stream. The heat pipeisothermalizes the fins eliminating the large conductive losses associated withstandard sinks. The heat pipe heat sinks, shown in Figure 8, dissipate loads inthe 75 to 100 watt range with resistances from 0.2 to 0.4°C/watt, dependingon the available air flow.

In addition, other high power electronics including Silicon ControlledRectifiers (SCR’s), Insulated Gate Bipolar Transistors (IGBT’s) and Thyristors,often utilize heat pipe heat sinks. Heat pipe heat sinks similar to the oneshown in Figure 9, are capable of cooling several devices with total heat loadsup to 5 kW. These heat sinks are also available in an electrically isolatedversions where the fin stack can be at ground potential with the evaporatoroperating at the device potentials of up to 10 kV. Typical thermal resistancesfor the high power heat sinks range from 0.05 to 0.1°C/watt. Again, theresistance is predominately controlled by the available fin volume and air flow.

Sponsored by Master Bond As advances in epoxy and silicone materials constantly evolve, manufacturers of advanced electronic systems will find that … END_OF_DOCUMENT_TOKEN_TO_BE_REPLACED