While there has been a flurry of activity inliterature addressing the behavior of heat sinks in computer electronics,the reusability of the data presented in these papers has been somewhatlimited for two reasons:

1) The data presented is application specific.

2) There has never been a standard method for characterizing thebehavior of heat sinks.

This paper provides a historical overview of heat sink characterization in commercial electronics, discusses the need for standardization and then provides an overview of recent efforts. Only the characterization of cross flow heat sinks will be discussed here. In order to fully define thebehavior of such heat sinks, both the flow impedance (pressure drop) andthermal resistance must be characterized. This can be determined eitherexperimentally or analytically. The author hopes that similar efforts willbe considered for both natural convection and impingement flowapplications in the near future.

With the evolution of the personalcomputer, the cooling of high power components has moved to the forefrontof system design. Over the years the power dissipation in the PC smicroprocessor has been increasing steadily. For this reason, the use ofheat sinks in computers has become more common. This has promoted a flurryof activity in the arena of electronics cooling, with countless papers oncharacterizing heat sinks.

In almost all of these cases, wind tunnels were used to measure thermal resistance as a function of free stream velocity (see Figure 1). With this information, thermal designers could predict the performance of heat sinks in their system and predict the temperature of components using thefollowing equation,

Limitations of the traditional approach

Although theprevious approach served its purpose at the time, designers realized thatthere were many limitations to this type of characterization. Some ofthese limitations are as follows: 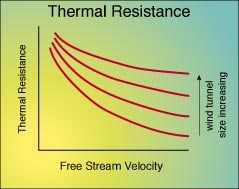 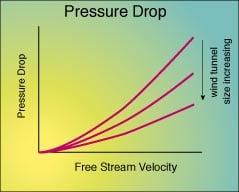 Until recently, this aspect of heat sink behavior has been ignored.Figure 3 shows the relationship between velocity, pressure drop and windtunnel size. As with thermal resistance there is no unique curverepresenting the airflow performance of the heat sink.

3) Earlier data was not in a form that can be used in system modeling.For system modeling, heat sinks are represented as volume resistances tolimit the size of complex system models as described by Patel & Belady[1]. In wind tunnel tests, the air flow throughthe heat sinks is unknown and, therefore, the behavior of the volume in asystem flow field cannot be determined. For example, the interaction inmulti-heat sink systems cannot be predicted.

4) The tests were not normalized and, thus, comparing the performancebetween heat sinks was difficult. Heat sink A may perform better than heatsink B in a large wind tunnel but the reverse may be true in a smallerwind tunnel. So which is the better heat sink? This depends on theapplication.

5) Finally, wind tunnel measurements have limited resuability. Published data by one manufacturer can not be used by another manufacturer unlessthe applications are identical.

The industry desperately needs a standardmethod for characterizing heat sinks and a method that provides data whichcan be applied to all applications. If such a method can be developed, thebenefits would be as follows:

1) Heat sinks can be characterized only once for all applications. Thetest data would be reusable by the entire industry. This data could beshared by the entire community, who would not have to ‘second guess’ thetest method.

2) Test can be quick since parametric studies comparing various windtunnel sizes would be unnecessary.

3) Heat sink manufacturers could provide their customers test data along with their heat sinks without ever needing to understand the application. Tests could be done independently and, thus, reduce the number of testsnecessary (i.e., one test for all forced convection applications).

In order to reap these benefits, it is critical to understand the flowin the heat sink itself by somehow measuring the mass flow or volumetricflow at standard temperature and pressure (STP). Historically, only theflow through the wind tunnel was known, but the airflow through the heatsink and channel velocity was unknown. Figure 4 shows a closely ductedwind tunnel.

For a given approach velocity, the channel velocity in the heat sink is implicitly known. Therefore, Figures 2 and 3 can be modified as shown inFigure 5. Note that these curves are shown with the approach velocity asthe independent variable. The data could also be presented with volumetricflow or mass flow, since either of these can be derived from the other.

Some companies are already using the closely ducted approach for testing heat sinks. HP, for example, has alreadyadopted this type of approach and has seen significant benefits (seereference 1). The HP test uses a flow chamber or metered air sourcesimilar to the one in Figure 6 that is in accordance with the AMCAStandard 210[2]. Figure 7 shows aschematic of the heat sink test fixture. Using the flow bench, both thepressure drop and the thermal resistance can be determined simultaneouslyas a function of volumetric flow. The approach velocity can easily bedetermined by simply dividing the flow rate by the cross-sectional area ofthe duct resulting in the data presented in Figure 5. 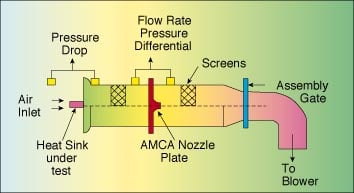 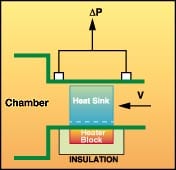 Many of HP’s divisions now share this test data and, thus, minimize test time while allowing its Engineers to focus on system design. The validity under investigation by Biber & Belady[3]. This published work compares pressure drop measurements with correlations and CFD modeling with excellent agreement. Work is under way to validate the thermal resistance as well.The ASME K16 Committee has also recognized the need for a usefulstandard for heat sink characterization and has formed an AdhocSubcommittee on Heat Sink Characterization. The charter of thissubcommittee is to propose a useful standard that would address theshortcomings of current methods of testing. The subcommittee consists of11 members from the thermal community from both academia and industry asshown below:

To date this subcommittee has laid the foundation of the proposal.Firstly, and most importantly, the proposal must have buy-in from the heatsink community, both suppliers and customers. Secondly, it is imperativethat the test procedure be easily reproducible. Each aspect of the testsetup will be addressed. For example, the committee currently favors thefully ducted test fixture with uniform heating at the base of the heatsink. The target of the committee is to have a preliminary outline of theproposal for the ASME National Heat Transfer Conference in Baltimore thissummer.

As systems become more complex, designers will beforced to focus on system level issues and will devote fewer resources forcharacterizing heat sinks. Therefore, an effective standard allowingsimple, reproducible and reusable data will be needed. To achieve this, itis imperative that the characterization tests be independent of theapplication. To date, the closely ducted approach appears to fill thisneed. Note that this approach is not new. This type of characterizationhas existed in the defense industry for heat exchangers and cold plates.As the computer industry moves from relatively simple systems (i.e.,single processor systems such as PCs) to more sophisticated systems withmultiple processors and other critical components, it becomes moreapparent that our industry must follow suit.

Sponsored by Master Bond As advances in epoxy and silicone materials constantly evolve, manufacturers of advanced electronic systems will find that … END_OF_DOCUMENT_TOKEN_TO_BE_REPLACED