The pressure at different altitudes is what drives the density of the air because as the pressure decreases with altitude so does the air density. For all practical purposes above twenty one kilometers (70,000 ft) the air pressure is so low that almost no air is available for cooling. 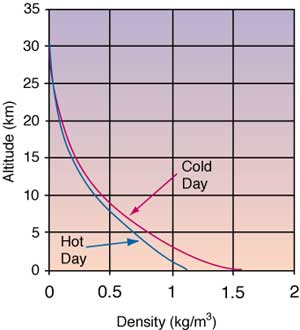 The pressure drop in air passages can be characterized as being caused by one of two factors: minor loss,

and the viscous loss,

Combining these two losses into one equation gives

Under atmospheric conditions the variation in the air viscosity is small. For most forced-air-cooled systems the flow in the internal passages is turbulent and so the exponent, n tends to vary from 1.78 to 2. As a result the viscosity term µ 2-n varies by only as much as 8%. So for forced-air-cooled systems at atmospheric conditions the effect of the variation of viscosity on air pressure drop can be neglected. The minor loss, A1

Q2 is identical in form to a special case of the viscous loss, A2

By summing up series and parallel combinations of cross sections making up a system the minor and viscous loss characteristics can be combined into one general loss factor, A and exponent, n where

is the density ratio is given by

is the density ratio is given by

n-1 which for most systems is quite close to linear. If the mass flow rate, 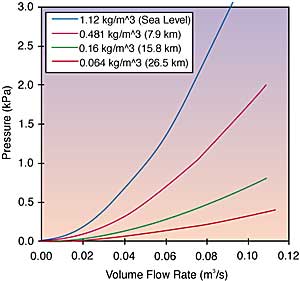 In a conventional fan the blades run at a constant speed. In a standard fan curve as shown in Figure 3 the speed is nearly constant throughout the entire fan curve even though the pressure and flow rate changes. 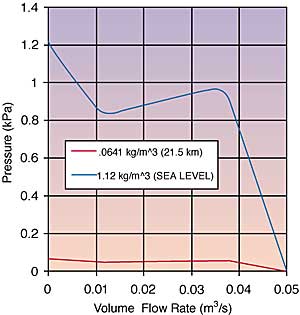 These changes are due to the blade design running at a certain speed. Pressure drop and flow rate curves vary for a conventional fan according to the air density. The volumetric flow rate for a given fan is constant, while the pressure output by this fan is drastically different at different altitudes. This can be seen by the two fan laws shown below.

As stated fan size and speed is constant, so that these equations reduce to:

The pressure output of the fan is directly proportional to the density of the air. Although the volumetric flow rate is constant the mass flow rate will drop with density. 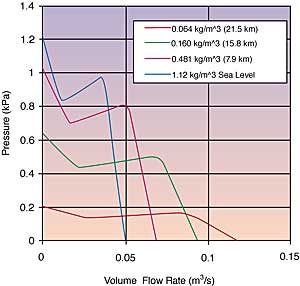 Slip fans usually give curves showing the mass flow rate of the fan at different densities as shown in Figure 5. 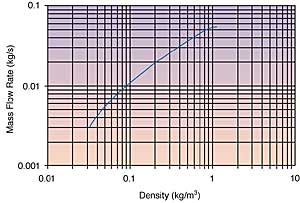 The mass flow is the most important factor in the cooling design, because the more mass flow that can be pushed through the system the lower the air temperature rise from inlet to outlet. Even at very low densities a slip fan still produces a reasonable mass flow rate. For example the mass flow at a sea level density of 1.12 kg/m3 is 0.053 kg/s and at a twenty-one kilometers density of 0.064 kg/m3 the mass flow is 0.0075 kg/s. The reduction in density is seventeen times lower while the mass flow rate is only reduced by seven times.

General considerations: When selecting a fan to cool forced-cooled equipment it is important to match the fan supply curve to the system pressure drop curve. The point at which the curves cross is the operating point and determines the flow rate and pressure drop. The selected operating point must be a stable and obtainable point with sufficient flow rate to provide the cooling required (both advection and convection).

When selecting a fan to operate at a high altitude the effect of low density and temperature on pressure drop, advection and heat transfer must be considered. Once the mass flow rate requirement at altitude

alt is established the volume flow rate required is simply

How the volume flow rate of the fan varies with density depends on whether the fan runs at a constant speed (conventional) or slips. 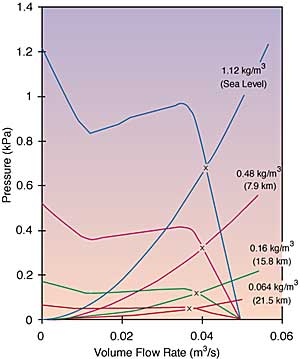 As the density decreases the pressure drop decreases and the volume flow rate decreases slightly. The amount the flow decreases is a function of the exponent in the system resistance,

depending on how the operating point moves along the fan curve. 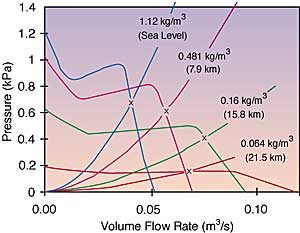 As the density decreases the pressure drop decreases and the volume flow rate increases. The amount the flow increases is a function of the exponent in the system resistance,

and the amount the fan speeds up. Slip fans typically speed up to a synchronous speed and then run constantly at that speed. As a result the operating volumetric flow rate increases as density decreases up to the fans maximum speed then decreases slightly similar to a conventional fan operation as shown in Figure 6.

Advection: The process of carrying the heat in the sensible heat of the fluid to another location is called advection. Advection is proportional to the volume flow rate, Q, the density,

, and the specific heat,cp of the fluid.

Forced convection, the transfer of heat from a surface to a moving fluid, is a function of the fluid properties (

,µ,k,cp), the velocity of the fluid, v and the surface geometry. A typical empirical correlation for forced convection takes the form.

where the exponents n and m are less than one and the factor C ranges from .036 to 1.86. For a fixed geometry air cooled system operating in the atmosphere the only quantities that effect convection that vary with altitude are the density and the velocity. Both these quantities are accounted for in the Reynolds number,

Since the viscosity µ and the thermal conductivity, k vary only slightly with altitude the heat transfer coefficient, h varies only with the mass flow rate,

For turbulent forced convection inside a passage the Nusselt number, NNu is given by

So the heat transfer coefficient, h varies with the mass flow rate to the 0.8, h~

0.8 which is valid for flow over flat plates as well as inside passages. In the example shown in Figure 8, the conventional fan/system shown in Figure 6 is used to cool a 500 Watt load during a Hot day to obtain a 10°C air to surface gradient at sea level. The effect of the decrease in advection is included in Figure 8. 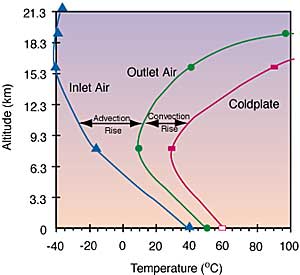 Air cooling at high altitude requires a more detailed analysis of the air, fan and system characteristics than sea level cooling. Although the air density decreases dramatically above nine kilometers the air temperature typically decreases sufficiently up to nine kilometers to compensate for the decrease in density. Fan pressure decreases with density. Conventional fans operate at almost constant volume flow rate as density changes. “Slip” fans operate at higher volume flow rates as density decreases. Fan selection for cooling at altitude is similar to sea level fan selection except that the mass flow rate is greatly reduced. The use of a “slip” fan can greatly reduce the fan power requirements over the operating altitude range. The air temperature rise (advection) and the heat exchanger performance (convection) are both adversely affected by decreasing density. By accounting for the variation in air properties, fan performance, system pressure drop, advection and convection the feasibility of air cooling at altitude can be readily determined from commonly available data.

Acoustic noise emission and communication systems in the next century

Sponsored by Master Bond As advances in epoxy and silicone materials constantly evolve, manufacturers of advanced electronic systems will find that … END_OF_DOCUMENT_TOKEN_TO_BE_REPLACED