The value of thermal conductivity for most gases and vapors range between 0.01 and 0.03 W/mK at room temperature. Notable exceptions are Helium (0.15) and Hydrogen (0.18).

The most common theoretical explanation of heat conduction in gases is provided by the kinetic gas theory, which treats the collisions between the atoms or molecules as the prime mode of transfer of energy. Radiative heat transfer is neglected in this approach.

The following table gives the thermal conductivity at room temperature for a variety of gases. 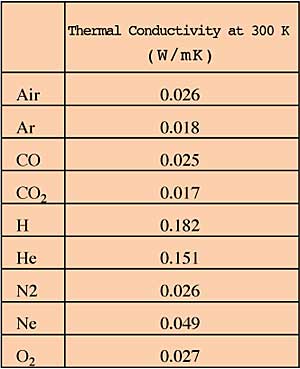 Acoustic noise emission and communication systems in the next century

Sponsored by Master Bond As advances in epoxy and silicone materials constantly evolve, manufacturers of advanced electronic systems will find that … END_OF_DOCUMENT_TOKEN_TO_BE_REPLACED