Fan modelling is one of the most critical aspects of the analysis of forced-air-cooled systems. Lasance [1] summarized the challenges of modeling air movers such as fans and key factors that need to be taken into consideration. Such factors include the need to model the fan hub, and to account for the swirl velocity coefficient.

In addition to the above challenges, Grimes et al. [2] found that vendor fan performance characteristic curves published in manufacturer catalogs can typically be only approximately reproduced by clients under standard conditions, although vendor data is supposed to be generated in accordance with BS Standard 848. This standard specifies an acceptable uncertainty of ± 2 % for all measurements of fan flow.

Furthermore, the potential adverse influence of the operating environment on fan curve performance is often overlooked in numerical work, and is the focus of this article. Constricted installation spaces in electronic systems can result in significant fan performance losses [3-5], as illustrated in for example [3]. To demonstrate the potential significance of this oversight, the results of a computational fluid dynamics (CFD) benchmark undertaken for a mock-up telecommunication system to assess the accuracy of fan curve modeling is presented.

As shown in Figure 1, the system is comprised of five mock-up heat dissipation units (designated as Units 1 to 5), each having a printed circuit board (PCB) assembly mounted to a heat sink. PCB heat dissipation was experimentally simulated using board-mounted resistors. Units 1, 2, and 3 are comprised of a single PCB-heat sink assembly, whereas Units 4 and 5 both have two PCBs separately mounted to heat sinks. 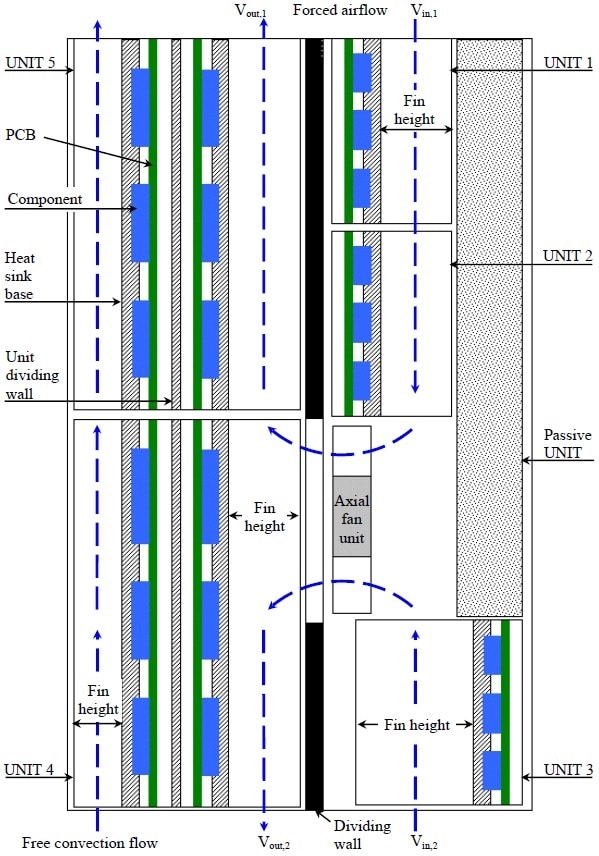 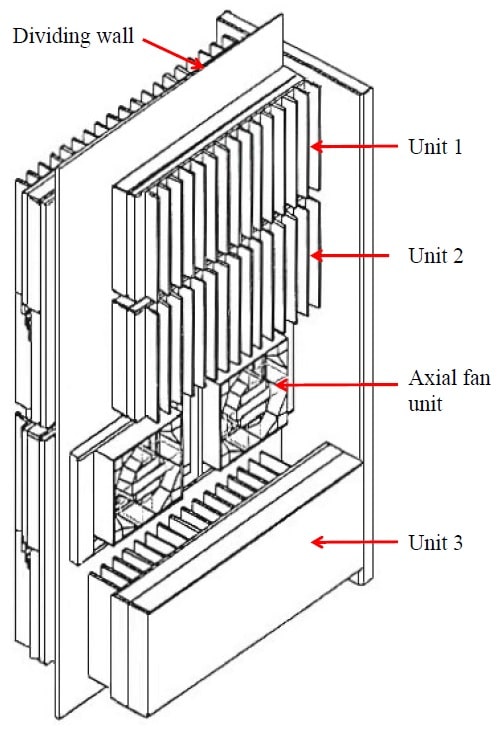 (a) Side view, illustrating airflow for cooling configuration C    (b) Exploded view (with cabinet cover and passive unit removed from (a))
Figure 1: System geometry and internal airflow patterns. 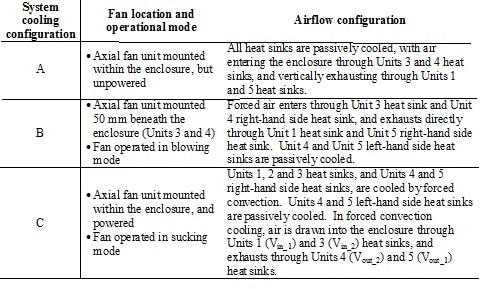 For cooling configuration C, the influence of the restricted environment on fan performance requires to be considered. In the absence of a physical prototype, the fan performance curve was obtained from the vendor and was generated in accordance with BS Standard 848. In addition, the influence of a single 200 mm x 200 mm flat plate obstruction mounted at varying distances from the fan, ranging from 10 mm to far field, on either the pressure or suction side, as illustrated in Figure 2, is assessed. As expected [3], the suction side is found to be more sensitive to the presence of an obstruction than the pressure side.

The airflows entering and exiting the system enclosure were measured using hot wire anemometry to determine fan flow rate. Operating temperature was measured in steady state conditions at selected locations, and the electrical power dissipated as heat by each unit was also measured. These latter two measurements combined permitted the calculation of the unit thermal resistance. 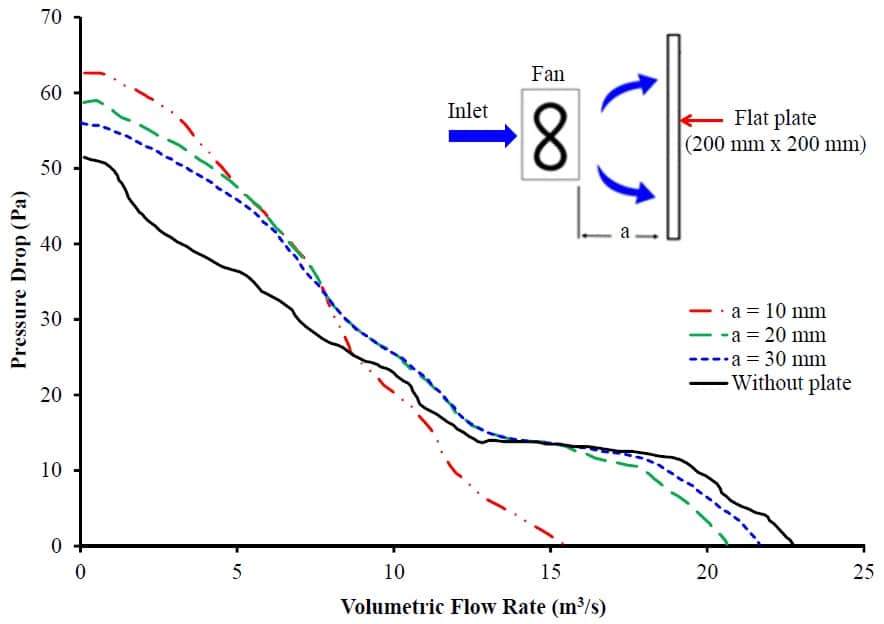 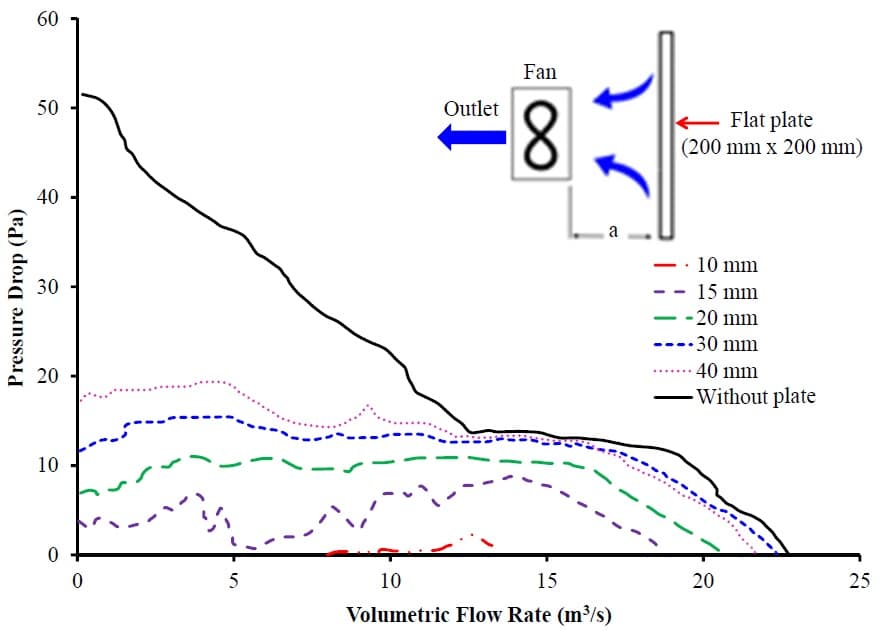 (a) Pressure side analysis

(b) Suction side analysis
Note: a = separation distance between fan and flat plate obstruction.

As shown by the results presented in Table 2, very good agreement was found between numerical predictions and measurements for cooling configurations A and B. However significant discrepancies in heat sink thermal resistance exist for configuration C, which is attributed to inaccurate prediction of the fan airflow rate.

This article illustrates that without supporting measurements, predicting complex system thermal performance is a challenge because of the non-availability of accurate fan flow modeling data, applicable to the system geometry and cooling configuration under analysis. The accuracy of the CFD software itself is unlikely to be a significant source of error in this instance.

Are Graduate Engineers being Effectively Educated for Today’s Workplace?
Next Post »

Sponsored by Master Bond As advances in epoxy and silicone materials constantly evolve, manufacturers of advanced electronic systems will find that … END_OF_DOCUMENT_TOKEN_TO_BE_REPLACED