Editor’s note: In recognition of the 20th year of ElectronicsCooling, we are republishing articles from past issues that we believe to be of particular value to our readership.  The following article was published in the February 2003 issue as a Calculation Corner authored by Bob Simons.  Bob served as an Associate Technical Editor of this publication from January, 2001, to December, 2011.
For those readers who find this sort of tutorial useful, please refer to the list, compiled by Bob, of many other Calculation Corner columns authored by him as well as by others: https://electronics-cooling.com/2011/09/a-useful-catalog-of-calculation-corner-articles/ .

As noted previously in this column, the trend of increasing electronic module power trend is making it more and more difficult to cool electronic packages with air. As a result there are an increasing number of applications that require the use of forced convection air-cooled heat sinks to control module temperature. An example of a widely used type of heat sink is the parallel plate configuration shown in Figure 1.

The maximum allowable heat sink resistance, Rmax, is then given by

where Tair-in, is the temperature of the cooling air at the inlet to the heat sink passages. At this point many thermal engineers will start looking at heat sink vendor catalogs (or more likely today start searching vendors on the internet) to find a heat sink that will fit in the allowable space and provide a heat sink thermal resistance, Rhs, less than Rmax at some specified flow rate. In some cases, it may be useful to do a sizing to estimate Rhs for various plate-fin heat sink designs to determine if a feasible design configuration is possible. The remainder of this article will provide the basic equations to do this.

The thermal resistance of the heat sink is given by,

where h is the convective heat transfer coefficient, Abase is  the exposed base surface  area  between  fins,  Nfin  is the number of fins, ηfin is the fin efficiency, and Afin is the surface area per fin taking into account both sides of the fin.

To proceed further it is necessary to establish the maximum allowable heat sink volume in terms of width, W, height, H, and length in the flow direction, L. It is also necessary to specify a fin thickness, tfin.  Using these parameters the gap, b, between the fins may be determined from

The exposed base surface area may then be determined from

and the heat transfer area per fin from

To determine the heat transfer coefficient acting upon the fins, an equation developed by Teertstra et al. [1] relating Nusselt number, Nu, to Reynolds number, Re, and Pr number, Pr, may be employed. This equation is 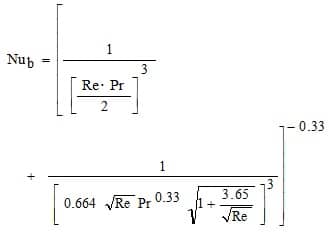 The Prandtl number is

where μ is the dynamic viscosity of air,  cp  the specific heat of air at constant pressure, and k is the thermal conductivity of air. The Reynolds number used in (8) is a modified channel Reynolds number defined as

where ρ is the density of air. Equation (8) is based upon a composite model spanning the developing to fully developed laminar flow regimes and was validated by the authors [1] by comparing with numerical simulations over a broad range of the modified channel Reynolds number (0.26 < Re < 175) and with some experimental data as well. Using the Nusselt number obtained in (8) the heat transfer coefficient is given by

where kfluid is the thermal conductivity of the cooling fluid (i.e. air).  The efficiency of the fins may be calculated using

where  m is given by

and kfin is the thermal conductivity of the fins.

and kbase is the thermal conductivity of the heat sink base.

For purposes of illustration these equations were used to estimate heat sink thermal resistance for a 50 x 50 mm aluminum heat sink. The effect of increasing the fin height and the number of fins is shown in Figure 2 for a constant air velocity and in Figure 3 for a constant volumetric flow rate. In both cases it may be seen that there are limits to how much heat sink thermal resistance may be reduced by either increasing fin length or adding more fins. Of course to determine how a heat sink will actually perform in a specific application it is necessary to determine the air velocity or volumetric flow rate that can be delivered through the heat sink. To do this it is necessary to estimate the heat sink pressure drop characteristics and match them to the fan or blower to be used. This is a topic for consideration in a future article.

Sponsored by Master Bond As advances in epoxy and silicone materials constantly evolve, manufacturers of advanced electronic systems will find that … END_OF_DOCUMENT_TOKEN_TO_BE_REPLACED