A reliable electronic product is generally a cool one. In addition, one of the main limiters of non-functional performance is operating temperature. Keep your product cool and it will last longer and/or operate faster. Electronics thermal management has been dogged by thermal resistances at part/part interfaces for decades. Reduce these main bottlenecks in the heat flow path and you’ll reduce operating temperatures substantially. Low thermal conductivity glues and pastes are often used to attach die to package (TIM1) and package to heatsink (TIM2). An effective technology to achieve a metal bonding at these interfaces has long been sought. It looks like it is now available.

MesoGlue is a new company that purports to provide a room temperature metal bonding technology. Utilizing nanostructured metals, a solid metal contact is formed when the Cu or Ag based ‘glue’ is pressed between two surfaces. With thermal conductivities between 300-425 W/mK (compared to typical existing TIM conductivities of between 1 and 10 W/mK) such bonds will radically reduce the overall thermal resistance the heat experiences on its way from die to ambient, thus reducing source (junction) temperatures. In addition a solid metallic contact will not dry out overtime, however it sure will be permanent!

I thought I’d demonstrate potential reductions by using FloTHERM to simulate a the ‘as is’ and ‘could be’ conditions. I took a typical flip chip lidded BGA package. The TIM1 connects the back side of the die to the lid, TIM2 two connects the lid to the heatsink above. Original conductivities of 3.5 and 1.0 W/mK respectively. Add a big chunky heatsink, put in a moving airstream of 300 lfm and power the die at 81.5W. 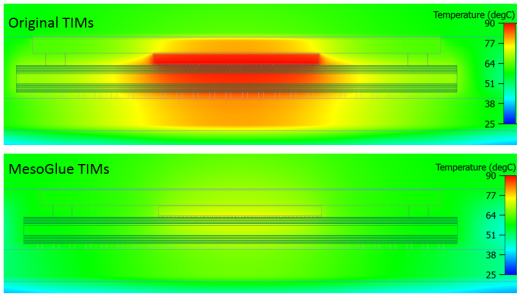 Another simulation was then done, setting both TIMs at 425 W/mK. For the same power dissipation there was a 25% reduction in junction temperature. Such a reduction would contribute directly to an increased reliability. The interface layers are very thin, of the order of 10s-100s of microns so how can they be so critical? The lack of thickness is outweighed by the very low thermal conductivity of glues and pastes. Their importance can be visualised when plotting FloTHERM’s Bottleneck parameter. A visual indication of which parts of the heat flow path are most responsible for making it difficult for the heat to flow to ambient:

Power dissipation of a CPU includes a contribution from the switching losses which in turn is proportional to the frequency at which it is operating. Instead of benefiting from a reduction in temperature, an increased power dissipation could be realised whilst maintaining the same operating temperature. In this case the power consumption could be increased from 81.5W to 115W (28%) with the use of the MesoGlue TIMs, maintaining Tj at 90 degC. Last longer and/or operate faster. Such opportunities will drive competitiveness, increase features, shrink form factors, increase speed….

There will always be a largest bottleneck in the heat flow path. But advances such as this room temperature metal bonding technology will help chase down the largest ones. Another weapon in the armoury of the thermal design engineer.

[The effects the MesoGlue technology might have on PCB surface mount assembly are arguably even more profound. Will this herald domestic PCB assembly, concurrently with domestic additive manufacturing?]

p.s. if it appears to be too good to be true it probably is. I’d be interested to read anyone’s comments about any downside of such a technology!

Automated Model Calibration in FloTHERM – A Future Cornerstone of Simulation Based Workflows, Today
Next Post »

Sponsored by Master Bond As advances in epoxy and silicone materials constantly evolve, manufacturers of advanced electronic systems will find that … END_OF_DOCUMENT_TOKEN_TO_BE_REPLACED