As devices become smaller, they still require high reliability in the presence of extreme power densities (greater than 1 kW/cm2). This creates demand for new thermal management solutions.  Nowhere is this more evident than with the use of gallium nitride (GaN) transistors, where engineers struggle with thermal barriers that limit the ability to achieve the intrinsic performance potential of GaN semiconductor devices.  Emerging as a common solution to this GaN thermal management challenge are metallized chemical vapor deposition (CVD) diamond heat spreaders [1].

Experiments and simulations will demonstrate the enhancement of heat dissipation capabilities of using CVD diamond heat spreaders in combination with a silicon-based hybrid micro-cooler.  Figure 1 shows the experimental setup.  A customized test chip exhibiting eight small hotspots was fabricated and bonded to both the silicon cooler and diamond heat spreader through a thermal compression bonding (TCB) process. The silicon hybrid micro-cooler combines micro-jet impingement and micro-channel flow.  Different types of CVD diamond material with thermal conductivities of 1500 W/m-K and 2000 W/m-K were attached to the device and their performance compared.  Also studied was the thermal effect of both the heat spreader and bonding layer thickness.  For the simulated GaN device, the dissipated power densities for various cooling solutions were evaluated. 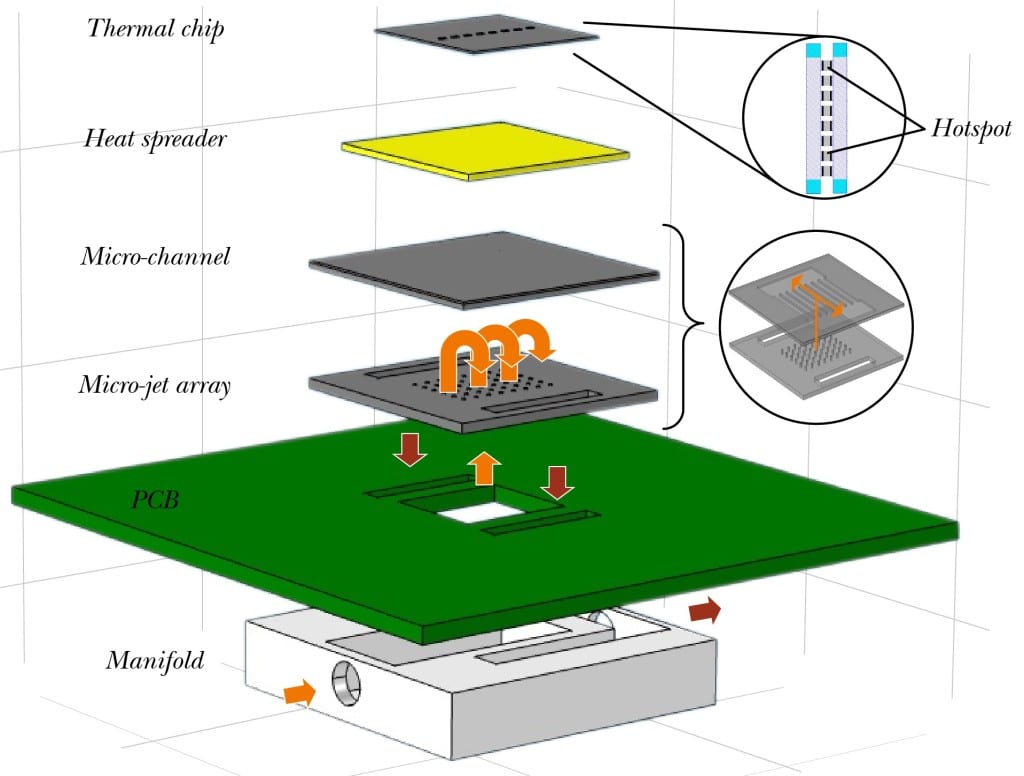 The experimental tests were performed on the thermal test chip of 200μm thickness.  The chip heating power ranged from 10W to 100W generated by the eight hotspot heaters (each of size 450 × 300μm2).  The micro-cooler flow rate was 400 ml/min requiring a pumping power is 0.2W.

Numerical thermal simulations for the test configuration were performed using commercially available finite element software [5].  Taking advantage of the symmetries in the system, only a quarter of the structure was modelled with symmetrical boundary conditions applied, as is illustrated in Figure 2.  Silicon thermal conductivity was modelled as temperature dependent using the relationship:

where T is temperature (K) and ksi is thermal conductivity (W/m-K).

The thermal conductivity of the applied solder material, Eutectic Gold/Tin (Au/Sn), is assumed to be constant at 57 W/m-K [6].  The Au/Sn bonding layer of 5μm thickness is assumed between silicon and diamond contact interfaces.  Chip heat fluxes are prescribed on the hotspot heaters only. 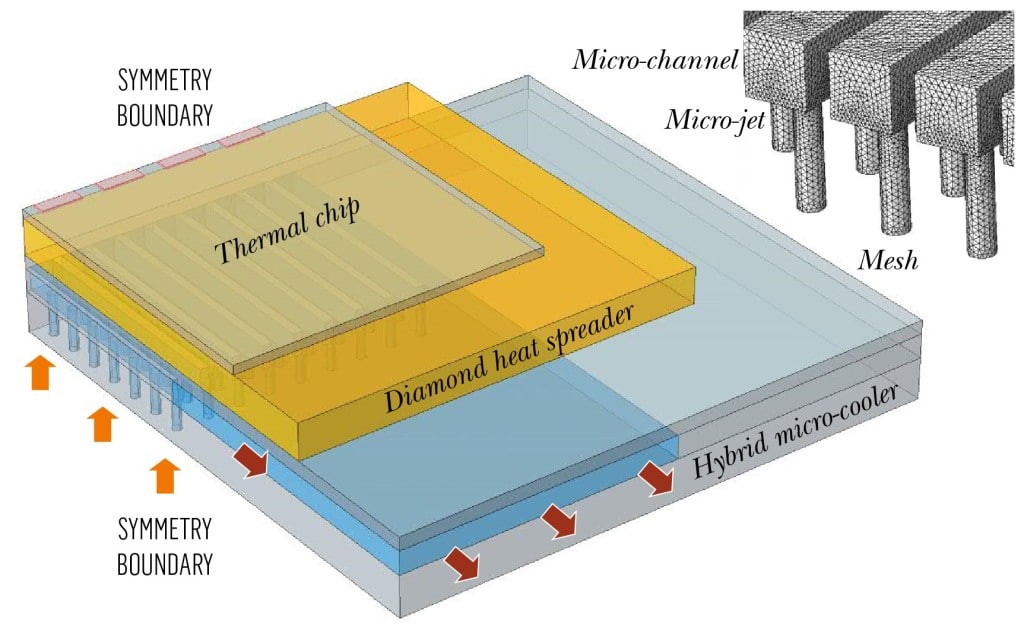 A comparison of measured and predicted maximum chip temperature is shown in Figure 3 for structures with and without a diamond heat spreader.  Overall, it is observed that experimental measurements and numerical predictions are in close agreement. 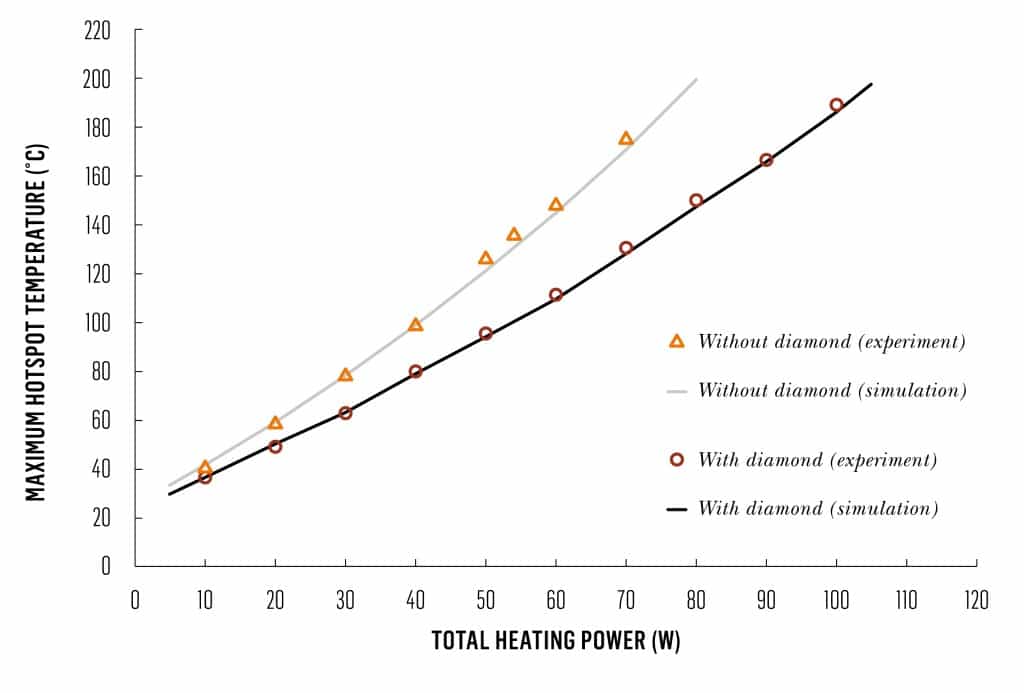 Figure 3: Comparison of measured and predicted maximum chip hotspot temperature for different heating powers with and without a diamond heat spreader. 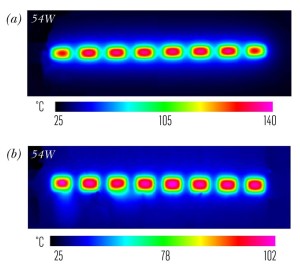 Figure 4: Measured infrared thermographs of the heating areas on the thermal test chip (a) without and (b) with diamond heat spreader for 54W power dissipation. The maximum scale value reflects the peak temperature. 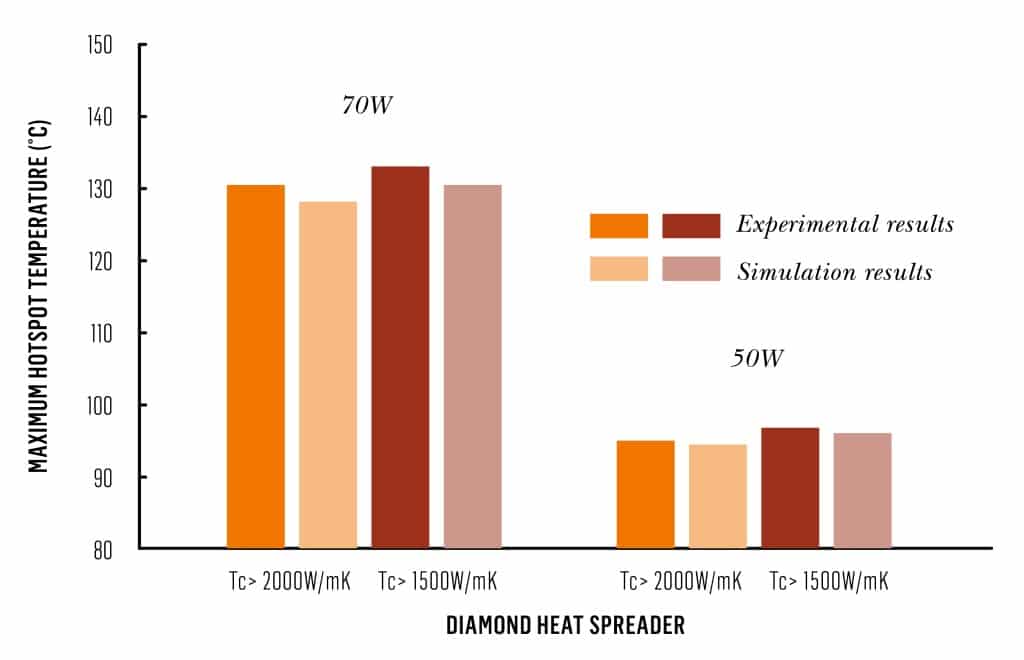 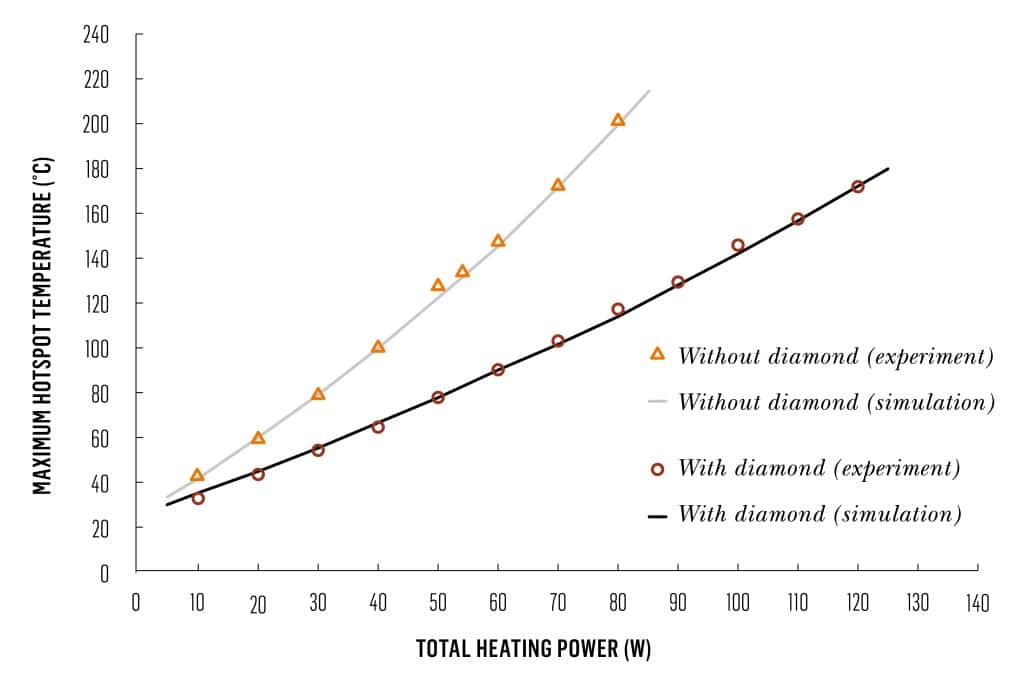 Figure 6: Maximum hotspot temperature as a function of heating power with and without the diamond heat spreader having a thermal conductivity of 2000 W/m-K.

Additional simulations were performed to investigate the effect of the diamond heat spreader having a thermal conductivity of 2000 W/m-K and thickness ranging between 100μm and 700μm.  Figure 7 illustrates the variations of the maximum hotspot temperature and the maximum heat flux at the top surface of the silicon micro-cooler. 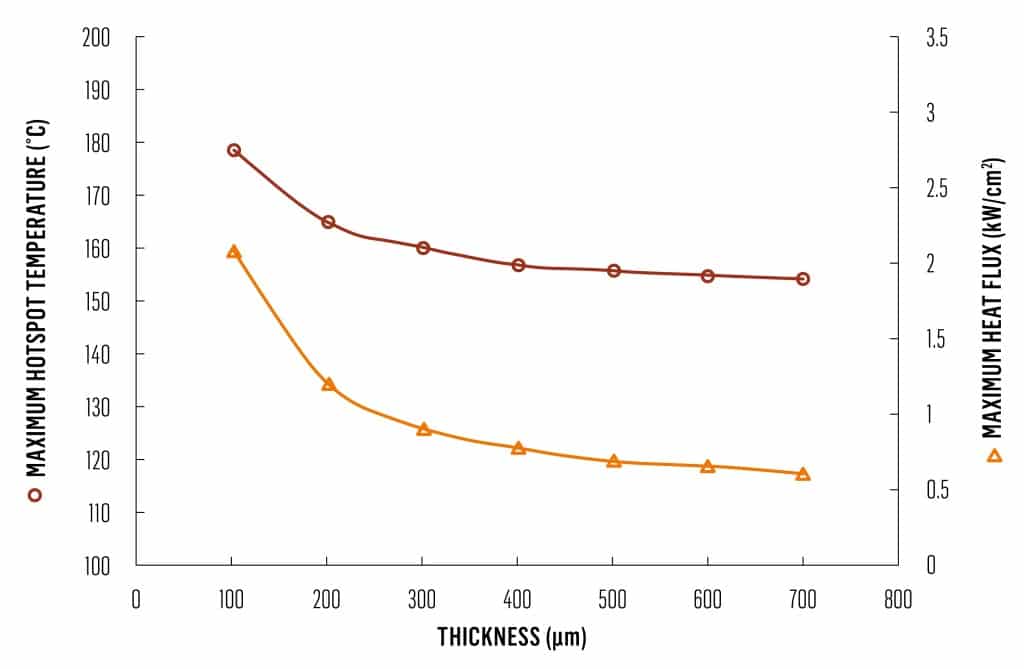 Figure 7: Predicted effect of diamond heat spreader thickness having a thermal conductivity of 2000 W/m-K on the thermal performance of the cooling structure having 110W power dissipation. 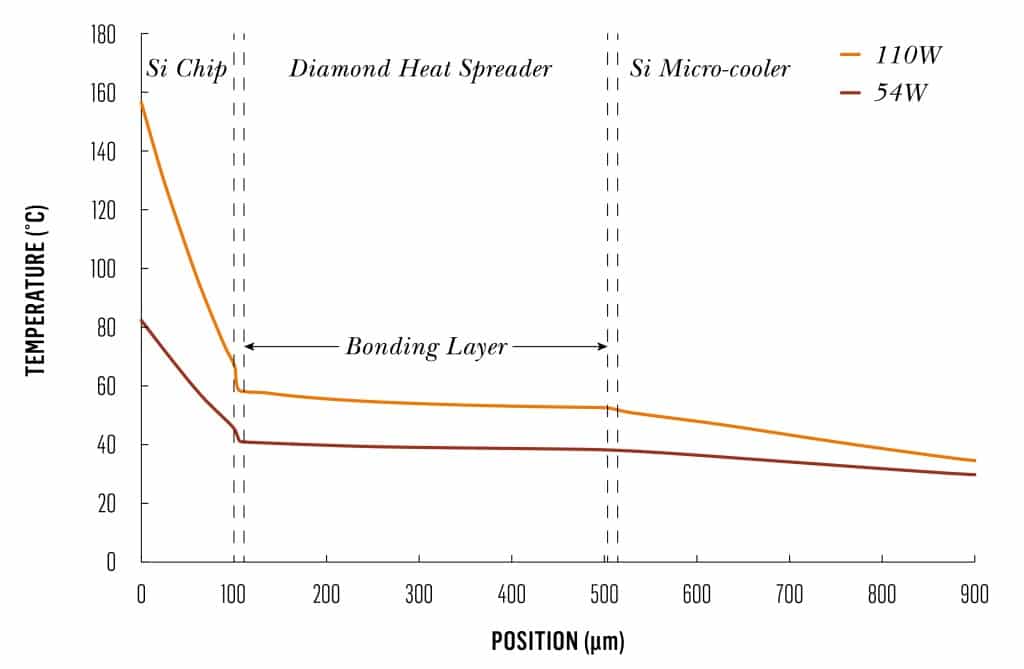 Figure 8: Predicted temperature profile across the micro-cooler structure having a diamond heat spreader.

Sponsored by Master Bond As advances in epoxy and silicone materials constantly evolve, manufacturers of advanced electronic systems will find that … END_OF_DOCUMENT_TOKEN_TO_BE_REPLACED