Fairy tales are a well-established way to convey science and technology education. For example, a recent textbook [1] has documented how a range of Victorian-era (1837 – 1901) instructors used fairies and their tales to clarify scientific and technological concepts for young audiences. Today, elementary school curricula continue to incorporate fairy tale-style storytelling to enhance science, technology, engineering and math (STEM) education [2].

Others adopted a similar approach in the field of electronics-equipment cooling. During the 1990’s and early 2000’s, Kordyban [3-5] humorously chronicled the myths, mistakes, and “lessons learned” from practicing engineers involved in the field.

In a similar vein, ElectronicsCooling initiated the thermal facts and fairy tales (TFFT) column in Spring 2010 [6]. This edition’s TFFT is the twenty-fourth column, with all previous columns listed in Table 1. ElectronicsCooling has presented these “fairy tales” in an effort to help readers become more efficient in their daily jobs. It is also hoped that these columns have challenged some of your thinking and motivated you to better understand electronics cooling. 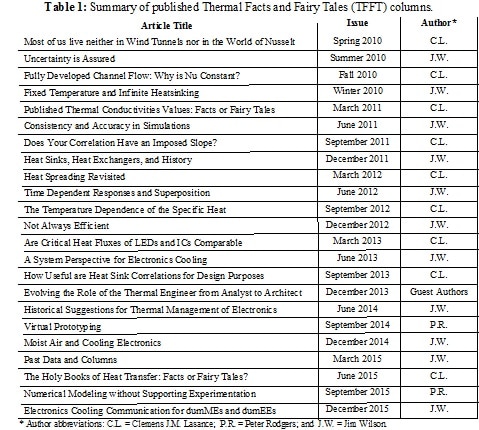 Responding to the demand for improved design productivity, vendors of CFD codes have significantly enhanced code pre- and post-processing capabilities. One aspect of pre-processing enhancement is automated meshing. However, automated meshing is far from an exact science, as noted by the recent NASA commissioned report on its CFD vision for 2030 [9]. It might be tempting to believe that NASA’s 2030 goals for CFD analysis do not apply to electronics cooling. Nevertheless, NASA’s report presents a series of seven findings, one of which, Finding 4, states that “mesh generation and adaptivity continue to be significant bottlenecks in the CFD workflow, and very little government investment has been targeted in these areas” [10].

Generating a high-quality computational mesh for an electronic system is generally one of the most challenging tasks in CFD analysis. The mesh must both represent the geometry and capture the physics of the problem. Consequently, the concept of automated mesh generation is either considered as a dream of the CFD analysts who advocate it, or a fairy tale [10]. Before highlighting areas of caution with automated meshing, it should be noted that meshing is not truly a CFD issue.

The first area of concern for most users is coping with the practical meshing difficulties encountered for real-world CFD applications that have complex geometries (rather than idealized ones, such as flow over a flat plate!). When dealing with actual complex geometries, an automated mesh generator may fail to produce a mesh [11]. Alternatively, the automated mesher may generate a mesh that may not be optimum. Considering that the philosophy of automated meshing is to relieve the user of generating the mesh, the user may feel left with few or no tools for resolving such difficulties.

A second area of concern is that today’s meshing software is missing an important element; it has in-built intelligence to understand the geometry/topology of the computation domain, but generally not for understanding the physics of the problem. However, most CFD users expect to obtain reliable simulation results in one round of mesh generation. This is not impossible, but is often not the case. The involvement of the CFD solver is actually required during mesh generation. The typical CFD workflow:

may be considered flawed to some extent [12]. In this workflow, meshing is performed before the physical problem setup. Consequently, the meshing software has no information on the physics when generating the mesh, and the CFD solver “expects” a good mesh from its input file.

Either the CFD software or the user actually needs to understand the physics to ensure that the mesh quality is sufficient to capture the major physics. Unfortunately, meshing software and solver still generally do not communicate with each other directly, except in the case of mesh adaption [12]. The meshing software and solver only communicate through the formatted mesh file/input file. Therefore, to produce a satisfactory mesh, the above CFD workflow actually requires an iterative, trial-and-error procedure. This was not an issue in the past, but may be one today considering the productivity of design analysis requirements. To obtain more reliable predictions, today’s users still need to devote time to produce a satisfactory mesh quality, among other requirements, at the expense of a loss in design/analysis productivity. Such an approach ultimately has a cost benefit.

Until the meshing software acquires CFD intelligence – which will imply changes in the conventional CFD workflow – fully automated meshing may be considered a fairy tale. Will this change in the near future?

Finally, similarly to the now discontinued technical data columns published from 1997 to 2009 [13], at some point, the list of thermally relevant fairy tales will be exhausted and replaced by a new column topic. We welcome our readers’ inputs in suggesting new column topics.

Sponsored by Master Bond As advances in epoxy and silicone materials constantly evolve, manufacturers of advanced electronic systems will find that … END_OF_DOCUMENT_TOKEN_TO_BE_REPLACED

Note that the 2020 workshop will be a Virtual Event

Announcement and Call for Abstracts

Abstracts for presentations may be submitted to:

SUBMIT AN ABSTRACT
Abstracts are solicited for technical presentations on electronics thermal management topics for presentation at this annual advanced technology workshop, include:

This Workshop has been held for more than twenty-five years and has gained industry attention for the excellence of keynote presentations and first announcements of important technological developments. Keynote presentations in the last five years have been given by speakers from AMD, Collins Aerospace, Georgia Institute of Technology, HPE/Hewlett Packard Laboratories, HP Systems Research Labs, IBM Corporation, Intel Corporation, Microsoft, Qualcomm Technologies, Samsung (Korea), Santa Clara University, The Citadel, and the University of Colorado. In 2019, the Workshop moved to the Microsoft Corporation Conference Center on the Microsoft headquarters campus, near Seattle WA, allowing us to set a new attendance record and expand the number of technical exhibits, with an outstanding response from speakers and attendees.

Each year, authors and attendees find this workshop format to be a highly effective forum for the announcement of new developments and new challenges, as well as for excellent networking between all participants. While the virtual workshop format for 2020 will mean that we cannot achieve the traditional networking environment, that the strong technical content will continue to draw solid attendance.

As a virtual workshop, we are able to offer a significant reduction in registration fees for attendees compared to the traditional in-person fees.

We anticipate holding a student abstract competition again for 2020, as we have since 2004. This will include cash stipends for winning graduate and undergraduate science and engineering student presentations. Stipends are funded by sponsor companies, accompanied by a waiver of registration fees. New logo

ABSTRACTS ARE SOLICITED IN THE FOLLOWING AREAS:

Speakers should submit one copy of a two-paragraph abstract that describes their proposed 25-minute presentation no later than October 9, 2020. NOTE: No formal technical manuscript is required. A post-conference download that includes presentation materials, as provided by the authors, will be sent to all attendees approximately two weeks after the event. Speakers will be asked to sign a permission to publish a statement.

Abstracts may be submitted to the general and program chairs. An abstract submittal page will also be available at a later date on the SEMI-THERM Educational Foundation website (www.semi-therm.org). Accepted presentations may be considered for subsequent publication with a full manuscript in the annual SEMI-THERM Symposium and on the SEMI-THERM Technical Library.

Questions may be addressed to ttw2020@semi-therm.org

IMAPS-UK will hold an Online Conference on the afternoons of Wednesday 25 November and Thursday 26 November 2020 on the topic of Thermal Management, where you can learn about the latest developments in passive and active cooling, materials, measurement, and modeling to address the challenges of enhancing thermal dissipation from advanced electronics systems.

This Online Conference will cover all aspects of designing, manufacturing, and testing of high thermal performance electronics, where miniaturization, costs, and reliability are critical features that need to be optimized.

The Provisional Agenda is presented below (subject to change).

The “Thermal Management – Online” Conference is Free to Attend for the following categories of IMAPS-UK Members (Individual, Corporate, Academic, Student), Members of IMAPS Worldwide and Members of IEEE-EPS. Membership of the above organizations will be checked prior to approval of the booking.

Non-Members of IMAPS (including those only registered on IMAPS-UK website) will be charged a registration fee of £50 (exc VAT).