An earlier article in this column considered the problem of cooling electronic components in a closed box [1]. In outdoor applications for example, it may be necessary to totally seal the box to prevent exposure to airborne particulates, water droplets or other sub- stances in the air that could be injurious to the electronic components. In such an application, heat picked up by the air circulating over the electronic components within the box is rejected to outside air by means of an air-to-air heat exchanger mounted in one of the walls of the box. Such a heat exchanger may be as simple as two plate-fin heat sinks (or a heat sink with fins on both sides) mounted base to base in an opening in the wall of the box. Of course in such cases, the air that is cooling the electronics components will always be higher in temperature than the outside air being used for heat rejection from the box. If this does not provide a satisfactory cooling solution, an alternative that might be considered is augmentation with thermoelectric cooling (TE) modules sandwiched between the heat sinks as shown in Figure 1.

where q is the heat dissipation of the electronic components and R2 is the total thermal resistance of the external heat sink, neglecting the contribution of the rest of the wall. It should be noted that throughout this analysis and in the subsequent calculation examples, heat sink resistances, R1 and R2, are assumed to include both the convective part and any associated thermal interface resistance between the heat sinks and the wall or later in the article, the TE modules. The air temperature entering the internal heat sink passages is given by,

which, substituting in eq. (1) for Tw, gives

The temperature drop of the air passing through the internal heat sink is given by,

where C1 is the air heat capacity rate inside the box, given by the product of the mass flow rate, , and specific heat, cp, of the inside air cooling stream. So, the temperature, Ti1, of the cooling air entering the electronics compartment (without thermoelectric augmentation) becomes,

and another equation for the corresponding TE heat dissipation

In addition to the above two thermoelectric equations we have the following heat transfer equations,

It should be noted here that under steady-state conditions heat load, q, in equations (8-10) is equal to the heat pumped, qp, by the thermoelectric cooler. Considering equations (8–10) together with thermo-electric equations (6) and (7) we have five linear algebraic equations. Given that we know or can assume values for q, R1, R2 , C1, Sm, Km, Rm and I, we are left with five unknown variables. The unknown variables are qte, Th, Tc, Ti2 and Ti1 (which is the variable we are really after). It is possible to solve these equations via algebraic substitution, as the author has done with the aid of software [5] capable of performing symbolic algebraic manipulation. However, the author found that the algebraic solution obtained for Ti1 by this method was so long (about two or three screen-widths) and so complex as to be of practically no value other than demonstrating that a solution could be obtained.

A method of practical utility is to solve these equations for numerical values using a matrix method as employed in an earlier article addressing the solution of a thermal resistance network [6]. To do this we first rearrange the equations (6-10) so that the unknown variables are on the left-hand side of the equation and the constant terms are on the right-hand side, 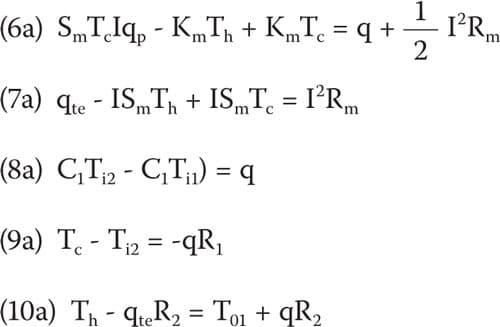 In matrix notation, these same equations can be compactly represented as

The coefficients of the unknown variables and the corresponding constant terms for each equation may be grouped in a tabular form as shown in Table 2. So doing, the top row represents the column vector of unknowns, the columns beneath each unknown variable make up the coefficient matrix and the rightmost column the constant vector.

The coefficient matrix below comprises the known coefficients of the unknown variables of the equations, as shown in Table 2,

the column vector of unknown variables which we seek to solve is,

and the column vector comprising the known constants on the right hand side of each equation is,

A matrix equation such as (11) may be solved for the unknown variables by multiplying the constant vector by the inverse of the coefficient matrix,

Many computational aids such as MathCad [5], Matlab [7], and EXCEL [8] can be used to obtain the matrix inverse of the coefficient matrix and multiply by the constant vector to obtain the desired solution vector.

To demonstrate the potential enhancement with thermoelectrically augmented cooling, we now turn our attention to some numerical results obtained using the method described above. For purposes of illustration, a small enclosure with an allowable opening in one side of 100 mm x 100 mm is assumed. It is further assumed that the base dimensions of the internal and external air-cooling heat sinks are 100 mm x 100 mm. Before proceeding further it is necessary to assign values to the thermoelectric module cooling parameters, Sm, Km,and Rm. The same 40 mm x 40 mm TE module considered by the author in an earlier article [9] will be considered here. In the earlier article, the author illustrated the calculation of single module TE parameters from vendor data, using the method discussed by Luo [4]. The values for the example TE module were found to be:

However, to increase the overall heat pumping capacity, four of these TE modules can be sandwiched in a 2 x 2 array between the bases of the internal an external heat sink. Consequently, the parameters for the array of TE modules will simply be four times the value for a single TE module or,

Also, if we assume that the TE modules are wired in series, the current, I, through each module will be the same and equal to the total current.

Calculations were performed for a range of heat sink resistances to show the effects of this parameter, coupled with the thermoelectric cooling effects. The heat sink thermal resistances used in the calculations were 0.075, 0.125 and 0.175 oC/W and were considered to have the same value for the heat sink within and outside the box (i.e. R1 = R2). The internal air flow rate within the box was assumed to be 20 CFM (0.00944 m3/s).

Figure 3 illustrates the effect of the electronics heat dissipation on cooling air temperature within the box, with a constant current of 3.5 amperes through the array of TE modules and an outdoor temperature of 35 oC. The internal and external air flow rate was held constant at 0.0094 cms (20 CFM). As can be seen, for the heat load range considered for this analysis, the cooling air temperatures obtained in all the cases are lower than could be achieved without employing TE enhancement. It should also be noted that, depending on heat load and heat sink thermal resistance, in many cases the cooling air temperature is even lower than could be obtained using outside air for cooling.

The equations and solution methodology presented in this article can provide a useful tool with which to obtain a preliminary estimate of the effectiveness of thermoelectric augmentation in providing cooling to electronic components in a closed box.

Of course, when considering the use of thermoelectrics for cooling applications, the designer should be cognizant of the electrical power required to drive the thermoelectric elements, which is given by equation (7). The cooling efficiency of thermoelectric devices relative to their power consumption, as with other types of heat pumping devices, may be characterized in terms of Coefficient of Performance (COP). COP, is defined as the ratio of cooling (q) provided over the electrical energy consumed (qte) to produce the cooling effect. For example, for the results shown in Figure 3, the COPs ranged from 0.3 to 0.4 at heat loads of 50 or 60 W to around 1 at a heat load of 150 W. The range of heat sink thermal resistance values had only a little effect on the COP realized. Similarly, considering the results shown in Figure 4, COPs ranged from 0.6 to 0.7 with little effect due to heat sink thermal resistance or outside air temperature. As one might expect from equation (7) the principal effect on COP is caused by the electrical current required to drive the thermoelectrics. This is amply demonstrated considering the results presented in Figure 2. At electric currents around 1.25 A, the COPs calculated ranged from 6 to 6.4 depending on the value of heat sink thermal resistance. Although these COPs may seem good, in this case the cooling air temperature within the box is no lower than could be achieved without thermoelectrics. As current is increased in Figure 2, the COP realized decreases rapidly to about 0.65 at a current of 3.5 A. However, even though the COP has dropped, this coincides with the maximum reduction of air temperature within the box by as much as 20 to 30 Centigrade degrees below those achieved without thermoelectric augmentation. For comparison, the COP values realized by conventional vapor compression refrigeration systems may typically vary from 1 to 4.

Sponsored by Master Bond As advances in epoxy and silicone materials constantly evolve, manufacturers of advanced electronic systems will find that … END_OF_DOCUMENT_TOKEN_TO_BE_REPLACED