The state of the art in performing thermal calculations in our industry is very advanced. However, how applicable the results of a calculation are to the real-world performance of a packaging or an active cooling component depends on the quality of the data characterizing these various components. In the real world of manufacturing, such characterization parameters can never be a single value, but are always rep-resented by a statistical distribution.

Thermal calculations performed by engineers in our industry most often deal with nominal values of performance parameters that represent the design objective for a particular component rather than the result of a rigorous statistical analysis of detailed test results of its actual thermal performance. This sort of model is referred to here as a “deterministic model” [1].

This practice does not adequately address the risk that a component or system will not meet its thermal performance objectives. This article discusses the use of the Monte Carlo Method in that regard. It provides a surprisingly efficient process for adapting a deterministic model to account for the statistical variability of manufacturing and operational parameters that have a signiﬁcant effect on the operating temperature of critical electronic devices.

The system to be analyzed here and the thermal model characterizing it have been discussed in previous installments of this column [2, 3, 4]. It is depicted in Figure 1. It consists of a ﬂip-chip package with a copper lid to which a heat sink is attached. The package design is representative of those used for high pin count, high power ICs, with dissipated power levels in excess of 50W. The dominant heat ﬂow path is from the active surface of the die (facing the substrate), up through the silicon, through the TIM1 layer (TIM = thermal interface material), the copper lid, the TIM2 layer, and into the heat sink whence it transferred into a ﬂow-ing air stream. The heat ﬂow path through the substrate and into the PCB (printed circuit board) represents only a small fraction of the total dissipated heat and is neglected here.

Reference 2 presents the design assumptions and calculated thermal results for 36 different conﬁgurations, representing different heat sink width, base thickness, thermal conductivity, and effective heat transfer coefficient (representing the cooling effect of the heat sink ﬁns at different assumed values of air velocity).  Conﬁguration #31 is assumed here. [Reference 4 deals only with Conﬁguration #31.  It provides the details of this conﬁguration in a more readable form than Reference 2]. 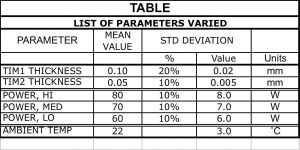 where the TIM thickness values, tTIM1 and tTIM2, are in mm units.  HTA is deﬁned as the Heat Transfer Area through TIM2 = 17.5 mm *17.5 mm = 306 mm2 [3,4]. The die area = 13 mm * 13 mm = 269 mm2.  The TIM1 and TIM2 materials are silver-ﬁlled epoxy and a metal-ﬁlled grease, respectively. The thermal conductivity values, kTIM1 and kTIM2 are equal to 2 W/mK and 1 W/mK, respectively. The following expression provides the calculated value of ΘJA as a function of the newly calculated values of ΘTIM1 and ΘTIM2:

Note that when ΘTIM1, NEW and ΘTIM2, NEW are equal to their original values, ΘJA, NEW is equal to its original value also, as would be expected. The ﬁnal junction temperature of the die is calculated using ΘJA, NEW, the dissipated power, and the ambient air temperature using:

STATISTICAL ANALYSIS OF VARIATIONS IN A SINGLE PA-RAMETER

The next step in this process is to quantify the variability in the thickness of the TIM1 and TIM2 layers. This would normally begin with the measurement of these parameters on a population of randomly selected parts from the manufacturing line.

The results would be plotted in the form of a histogram and an appropriate function ﬁtted to the data. In most cases, a normal (or Bell Curve) distribution is found to be effective in representing the variations of data of this sort [5].

Figure 2a displays a graph containing two normal distributions, each representing the statistical variation of the thickness of one the two TIMs. The mean values and standard deviations of these curves are provided in the Table. The curves are produced in a spreadsheet using the function:

In order to embed this function in a spreadsheet to generate the curves, a column of ascending thickness values needs be created.  A second column is populated with the NORMDIST function, with the Thickness argument in each occurrence of the function linked to the appropriate thickness value in the neighboring column. 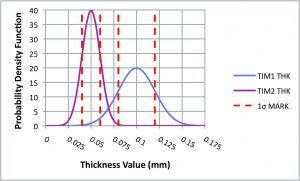 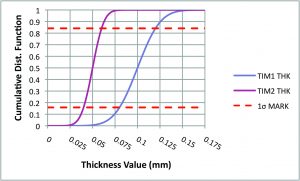 “Monte Carlo simulation is a type of simulation that relies on repeated random sampling and statistical analysis to compute the results. This method of simulation is very closely related to random experiments, experiments for which the speciﬁc result is not known in advance” [1].

The method requires the Inverse Cumulative Distribution Function to generate a randomly sampled population of thickness values consistent with the statistics in the original Probability Density Function. This inverse function has the following form in the spreadsheet:

In a spreadsheet, this is accomplished by linking the Thickness argument in the spreadsheet NORMINV function to a cell containing the random number function divided by an appropriate constant; such as: 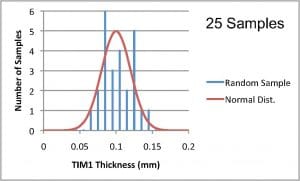 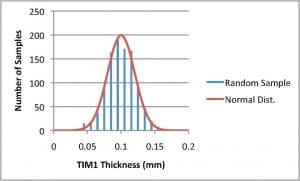 FIGURE 3a and 3b. Histograms generated using random sampled outputs from the Inverse Cumulative Distribution Function for TIM1: a) 25 samples; b) 1000 samples.

The histogram in Figure 3b can be used to generate an equivalent distribution of ΘTIM1 values by inputting each randomly sampled value of TIM1 thickness into Eqn. 1, and similarly for ΘTIM2. The resultant thermal resistance distributions are plotted in the graph in Figure 4.

Randomly selected pairs of sampled values of ΘTIM1 and ΘTIM2. from these distributions are input into Eqn. 3 to generate the associated distribution of ΘJA values, which is plotted on the right side of Figure 4. 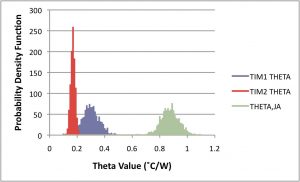 This ﬁnal stage of the calculation is intended to predict the highest allowed power consistent with having a high probability that TJ will not exceed a speciﬁed value, which is normally chosen for reliability reasons. In this case, the TJ limit is set at a typical value of 90C. The Table displays the mean values and standard deviations for three different power distributions and also for ambient temperature. In order to implement the generation of different junction temperature distributions based on these different inputs the same procedure as before is implemented:

The histograms representing the output of Eqn. 4 in response to the input of the random samplings of ΘJA, power, and ambient temperature values are shown in Figure 5a. Figure 5b depicts the Probability Density Function created by simply plotting the values of the histogram in an x-y plot. The associated Cumulative Distribution Function is plotted in Figure 5c and was created by performing a simple numerical integration in the spreadsheet. 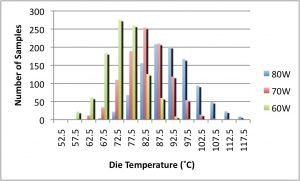 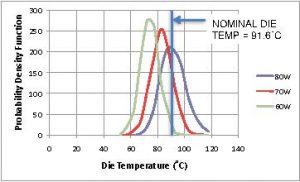 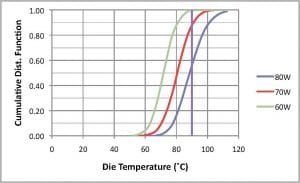 The value at any particular value of junction temperature was generated by adding up all of the values in the distribution to the left of the location to the value at that location. This analysis shows the following percentage of systems that would have a TJ in excess of 90C: 80W, 44.2%; 70W, 13.1%; 60W, 0.6%.

It is useful to compare these ﬁndings from applying the Monte Carlo Method to the thermal problem at hand compared with a calculation based on the mean values of all the parameters involved. Plugging the mean values of the parameters into Eqns. 1 – 4 yields a predicted junction temperature of 91.6C at 80W. One might then decide that this 80W value need only be reduced by a few watts to get the maximum value of TJ within acceptable limits. However, based on the Monte Carlo analysis performed here, one sees that making that decision would lead to over 40% of the devices having junction temperatures exceeding the design limit.

This analysis is intended to demonstrate the mechanics of the Monte Carlo Method in determining allowable power levels for a relatively simple electronics cooling application. However, the method is well capable of scaling to a much higher degree of complexity to deal with situations involving many more design parameters than the situation explored here. Furthermore, the method can readily be adapted to deal with Probability Density Functions other than normal distributions. All that is necessary

is that a suitable function or numerical method be constructed to replicate the experimentally derived distribution. This function would then be used to calculate the Inverse Cumulative Distribution Function that is needed to generate the random sampling of simulated outputs from the thermal model.

Sponsored by Master Bond As advances in epoxy and silicone materials constantly evolve, manufacturers of advanced electronic systems will find that … END_OF_DOCUMENT_TOKEN_TO_BE_REPLACED