In a recent blog “Some New Cooling Ideas are Needed Here,” I suggested (hoped?) that someone would figure out how to leverage the thermal laws of physics to devise innovative cooling systems which go beyond widely used, conventional techniques of conduction, convection, and radiation. The reason for looking beyond these solutions is that they seem to have reached a limit as to what they can do in practical systems, given the high cooling demands of today’s heat-intensive designs. Whether you use heat sinks, unforced air flow, forced air, liquid cooling, phase change materials, heat pipes, cold plates, or similar well-known embodiments of thermal-management techniques, there is only so much you can do in practice.

But there’s another technique that is less known yet very viable, at least at the atomic scale: the use of lasers for cooling. Perhaps you’re wondering, “Doesn’t the laser’s photon stream actually add energy and thus heat to the target? Isn’t this counterproductive?” The answer is “yes” to the first question, and maybe “no” to the second one. Just because it’s a source of heat doesn’t mean it can’t be used for cooling: think of air conditioners which are powered by a gas line and have an internal heating system. Although it is very counterintuitive to the non-technical layman, that arrangement can be used to create cooling via a no-compressor absorption process (Reference 1).

Although laser-based cooling may seem bizarre at first, it is both practical and even available as an off-the-shelf system. It’s based on deep understanding of quantum physics, and the physics supporting this counterintuitive technique is actually well established and is based on the work of physicists such as Arthur Ashkin (who shared the Nobel Prize in Physics in 2018 for his work on optical tweezers) and many others.

Laser cooling is actually a broad term which includes several techniques in which atomic and molecular samples are cooled down to near absolute zero. In very simple terms, it uses the fact that when an object (usually an atom) absorbs and re-emits a photon, its momentum changes, Figure 1. If there is a group (ensemble) of particles, their temperature will be proportional to the variance in their velocity, with more homogeneous velocities among particles corresponding to a lower temperature. The laser beam initiates cooling by “compressing” the velocity distribution of the particle ensemble, which results in cooling the particles.

Fig 1: In laser Doppler cooling, the atoms to be cooled are surrounded (“trapped”) by lasers which are tuned to a frequency slightly below an electronic transition in the atom. If an atom is moving in the direction of one of the laser beams, the light will be blue-shifted to where the atom can absorb the light. Then atom’s motion will be slowed, and the excited atom spontaneously emits a photon. As theses emissions are in random direction, so that on average, the momentum of the atom ensemble – and thus its temperature – are reduced.  (Image source: Quora)

Despite its esoteric nature or “magic-like” aspects (depending on your perspective), laser-based cooling is not just a laboratory curiosity. It is already used for off-the-shelf, vibration-free cryogenic cooling devices used for precision optical instrumentation (where any hint of vibrating is unacceptable) as well as exploration of states of matter such as Bose–Einstein condensates. The most-common variation of laser cooling is called Doppler cooling (see References 1, 2, and 3 for a high-level explanation, a mid-range one, and an equation-intense academic one, respectively)  and has been used, for example, to cool rubidium-85 atoms down to several hundred microK and below by trapping the target with multiple laser beams – that’s very close to absolute zero.

But multi-lasers traps are complicated, and trapping atoms and molecules is definitely challenging. Still, the idea of using photon emission and absorption for cooling is attractive, so much so that researchers at the University of Michigan (Ann Arbor, MI) have explored use of a standard infrared light-emitting diode (IR LED) – but connected with its electrodes reversed – to cool another device just nanometers away (no, this is NOT a joke!).

In their arrangement, when the LED was reverse biased, it began acting as a very low-temperature object and absorbed photons (representing energy) from the custom calorimeter which was positioned nearby using a piezo-based actuator, Figure 2.  A subwavelength gap of a few tens of nanometers between the LED and the calorimeter established what is called near-field spacing and evanescent coupling. 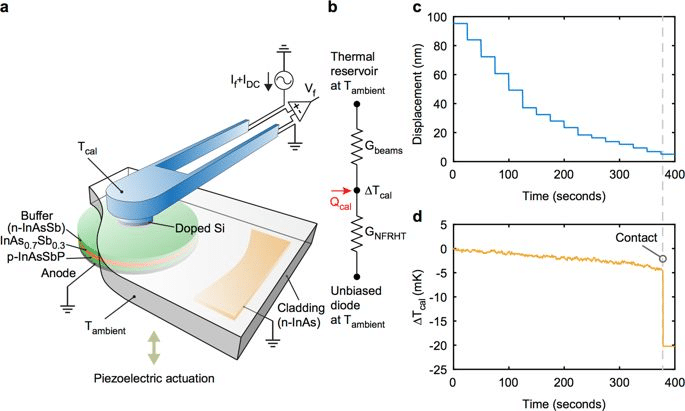 Fig 2: Measuring the radiative conductance: a) schematic of the set-up for measuring radiative conductance GNFRHT. The emitting area of the photodiode is located below the n-InAs layer; b) effective thermal resistance network showing the major heat transfer pathways, where the calorimeter has a power input (Qcal) due to a current supplied to the platinum resistor; c) and d) simultaneously recorded displacement and calorimeter temperature change (∆Tcal) during a GNFRHT measurement. (Image source: University of Michigan)

This cooling occurs via two mechanisms: photon tunneling (which enhances the transport of photons across nanoscale gaps), and suppression of photon emission from the photodiode (due to a change in the chemical potential of the photons under an applied reverse bias). Their work is detailed in their paper published in Nature, “Near-field photonic cooling through control of the chemical potential of photons.”

Who knows into what this may evolve? While this approach is presently suitable only for atomic-level cooling, it does demonstrate that active nanophotonic cooling using IR LEDS in place of coherent laser radiation is feasible. Perhaps it will somehow be expanded and “scaled up” to become the foundation of solid-state, on-chip device cooling based on nanoscale photonics and optoelectronics. As the old saying goes, “never say never!”

Sponsored by Master Bond As advances in epoxy and silicone materials constantly evolve, manufacturers of advanced electronic systems will find that … END_OF_DOCUMENT_TOKEN_TO_BE_REPLACED