The increased power dissipation of today’s integrated circuits has made knowledge of thermal resistance important to those who manufacture and use these devices. Thermal resistance is a device (i.e. semiconductor chip mounted in a package) parameter that is used to calculate junction temperature if the device power dissipation is known or can be estimated. This parameter is a measure of heat flow from the chip junction to some defined point under specific environmental conditions. The measurement of thermal resistance is simplisticin concept but difficult in practice.

The first step in thermal resistance measurements requires careful consideration of how the junction temperature will be determined. While there are several methods available – infra-red, liquid crystal, electrical parameter, for example – only the Electrical Test Method (ETM) is truly practical for most device manufacturers and users. This method relies on the fact that a temperature sensitive electrical parameter can be found for the device that provides a direct correlation to the device junction temperature. Unlike other methods, the ETM does not require any special modification to the device and can be performed on the device in its final form by making electrical connection to its leads. The simplest and most common parameter used for temperature sensing within a device is the junction voltage across a diode forward-biased with a low value of current. This voltage will usually vary linearly with temperature over a range suitable for making thermal resistance measurements and is veryrepeatable.

In a typical IC, there are many diodes suitable for temperature sensing butnot all of them are accessible through the device leads. Normally, the onlyavailable diodes are input protection diodes used to overcome potential ESDproblems; output parasitic diodes that occur between output stages, etc., andthe substrate isolation diodes that separate the various circuit elements fromeach other because they are back-biased during normal device operation. Thelatter diodes are activated whenever the device is reverse-biased with a smallcurrent; these diodes are collectively the ‘diode’ most commonly used toimplement temperature sensing for the ETM. Although a collection of individualdiodes, thinking of the collection as a single "diode" is a goodapproximation for most applications. Because all the diodes are associated withindividual isolation wells for the elements of the IC circuit, those diodesassociated with the heat producing elements on the chip will become the hottestand, hence, will have the lowest forward voltage across the device leads andprovides a good estimate of the highest junction temperature internal to thechip. When deciding on the proper temperature sensor, one must keep in mindthat some IC chip designs use an on-chip substrate bias generator to bias thesubstrate below ground level; these chips usually require either specialmeasurement circuitry to access the substrate isolation ‘diode’ or the use of adifferent diode for temperature sensing. 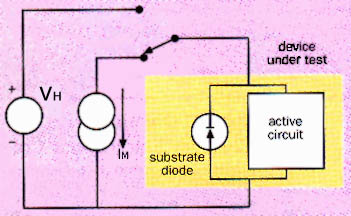 The circuitry for implementing the ETM is conceptually very simple, as shownin Figure 1. The measurement procedure consists of first obtaining the initialtemperature sensing diode junction voltage by reverse biasing the device with alow current (referred to as measurement current, IM)which forward-biases the diode. Next, power is applied to the device-under-test(DUT) with a voltage (referred to as Heating Voltage, VH)applies in a normal manner to the DUT and the current (referred to as HeatingCurrent, IH) measured. Lastly, the heatingconditions are removed and the initial measurement conditions reapplied toproduce a new diode voltage. The waveforms for this three-step operation areshown in Figure 2. 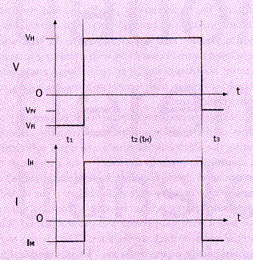 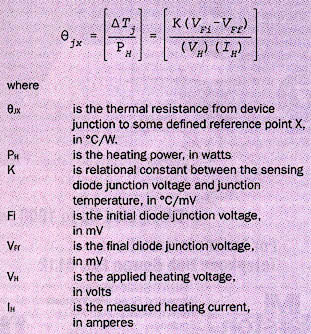 With the basics of the ETM thermal resistance measurements described, thenext important area of concern is the meaning of the "X" subscript. This is the area that causes most problems when making the measurements orreporting the results. Insufficient attention to this measurement area oftenresults in inaccurate, non-repeatable and, in some cases, meaningless results. This area is so important that the EIA JEDEC (Electronic Industries AssociationJoint Electron Device Engineering Council) has a subcommittee (JC15.1) devotedto thermal characterization and modeling of electronic component packages. Thissubcommittee recently released two standard test method ballot proposals, onefor the ETM and the other for a natural convection environment, that areawaiting formal approval before being released to industry.

From a practical point-of-view, the two ‘X’ conditions that define typicalapplication extremes are the enclosed natural convection environment (still airinside a one cubic foot enclosure with a defined mounting for the DUT) and theforced conduction environment (intimate thermal contact to infinite heat sink). The former environment defines a

JAmeasurement conditions and the latter a

JCmeasurement condition. In between these two extremes lie most of the practicalapplication environments found in the electronics industry: non-enclosednatural convection with mounting to a multi-layer printed circuit board; movingair in an enclosed environment; and non-infinite heat sinks in high temperatureenvironments, to name a few common environments.

When making thermal measurements, it is necessary to define every aspect ofthe conditions that produced the collected data. Merely listing the electricaltest conditions is not sufficient. How is electrical connection made to the DUT- via a socket or mounted directly to a printed circuit board? If the former,what kind of socket – a production-type or a test-type socket? How is thesocket mounted – to single-sided printed circuit board with minimal trace sizesor a multi-layer board with solid power and ground planes? What is the boardmaterial and how thick are the traces? The answers to these and otherenvironmental-type questions must be answered and fully documented to make thethermal data repeatable, comparable and meaningful.

Another matter of concern is that thermal resistance can not be consideredconstant even if all the environmental conditions remain constant. When makingthermal measurements on active devices, as compared to specially designedthermal test die which contain a resistive heater and a diode temperaturesensor, the power dissipation, the location of the heat sources internal to thechip and the size of these heat sources, will vary with the applied electricalconditions. CMOS-type digital devices dissipate power primarily when making atransition form one logic state to another. Thus, the power dissipation is afunction of the rate that the transitions occur (i.e. clock frequency). However, merely specifying the clock frequency used during a thermal measurementis not sufficient. The status of the device’s other leads must also bespecified because how inputs are configured and how output are loaded alsoaffects the power dissipation and the where the heat is being internallygenerated.

One must always keep in mind that thermal measurements are more difficult toperform correctly than might be initially apparent. Close attention to detailand documentation of the detail, is necessary to provide thermal data that areaccurate, repeatable, comparable, and meaningful.

Sponsored by Master Bond As advances in epoxy and silicone materials constantly evolve, manufacturers of advanced electronic systems will find that … END_OF_DOCUMENT_TOKEN_TO_BE_REPLACED