Fans can be thought of as low pressure air pumps that utilize power from a motor to output a volumetric flow of air at a given pressure. A propeller converts torque from the motor to increase static pressure across the fan rotor and to increase the kinetic energy of the air particles. The motors are typically permanent split capacitor alternating current (AC) induction motors or brushless direct current (DC) motors. We shall now look at this system in more detail.

Air moving devices are generally described as being either a type of fan (Figure 1a) or a centrifugal blower (Figure 1b). The main difference between fans and blowers is in their flow and pressure characteristics. Fans deliver air in an overall direction that is parallel to the fan blade axis and can be designed to deliver a high flow rate, but tend to work against low pressure. Blowers tend to deliver air in a direction that is perpendicular to the blower axis at are relatively low flow rate, but against high pressure. 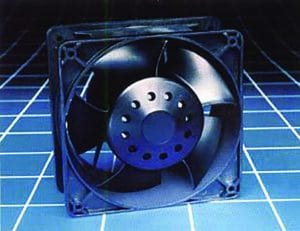 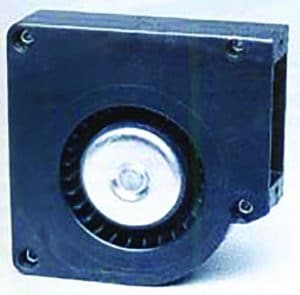 There are several types of fans, some of the most common being propeller, tube axial and vane axial styles. Propeller fans are the simplest type of fan, consisting of only a motor and propeller. One problem with propeller fans is that tip vortices are produced by the pressure differential across the airfoil section.
A tube axial fan (the most common type in electronic cooling systems) is similar to a propeller fan, but also has a venturi around the propeller to reduce the vortices. The vane axial fan has vanes that trail behind the propeller in the airflow to straighten the swirling flow created as the air is accelerated.
Centrifugal blowers may have a forward curved wheel, a backward curved wheel, or be of the squirrel cage variety.

Fans are of such common use that a basic understanding of the aerodynamics is appropriate. This understanding begins with the recognition that the blades of a fan propeller resemble the wing of an airplane, and as such follow the same aerodynamic laws. For example, a fan blade produces lift when the chord is elevated from the direction of the relative wind as shown in Figure 2.

Note: The cord is a line extending from the leading edge to the trailing edge. Angle of attack is the angle formed between the relative wind and chord
Figure 2: Nomenclature for an airfoil.

Since a fan is a constant volume machine, it will move the same volumetric flow rate of air irrespective of the air density. However, the mass flow rate does change as the density changes. This becomes important when equipment is expected to operate at altitudes significantly greater than sea level. Therefore the volumetric flow rate required at altitude (low density air) will be greater than that required to achieve the same cooling as at sea level.

All of the aerodynamic aspects of a fan are exhibited in a fan curve such as is shown in Figure 3. The fan performance curve is one of the few curves that are read from right to left, because you start with healthy aerodynamic flow and follow it through to aerodynamic stall. 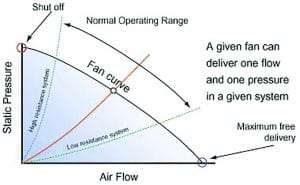 However, in contrast to an airplane wing, there is life after stalling in a fan. A stalled fan continues to deliver air, but at an increased static pressure and a decreased volumetric flow rate, and also at the cost of an increase in noise. If noise is not a consideration, the fan can be utilized in this condition.
An energy viewpoint is helpful in understanding the fan performance curve. For example, at the shut-off point, the fan is in the condition of the maximum potential energy. At free delivery, the fan is in the condition of the maximum kinetic energy. Although neither of these extreme conditions are likely to occur in practice, they can be useful parameters in comparing fans.
The governing principle in fan selection is that any given fan can only deliver one flow at one pressure in a particular system. This “operating point” is determined by the intersection of the fan static pressure curve and the system pressure curve. Figure 3 illustrates the operating points of both high and low resistance systems. It is best to select a fan that will give an operating point being toward the high flow, low pressure end of the performance curve to maintain propeller efficiency and to avoid propeller stall. Each particular electronic packaging system should be analyzed for possible reduction in the overall resistance to airflow. Other considerations, such as available space and power, noise, reliability, and operating environment should also be brought to bear on fan choice.
Steps to Fan Selection
Estimate the required airflow
Before selecting a fan, obtain as accurate an estimate as possible of the heat to be dissipated, because the overall system air temperature differential above the inlet ambient is directly proportional to the heat dissipated. It is then possible to estimate the amount of required cooling air. The basic heat transfer equation is:

This yields a rough estimate of the airflow needed to dissipate a given amount of heat at sea level. It should be noted that it is the mass flow rate of air, not its volumetric flow rate, that governs the amount of cooling.
Estimate the actual airflow
The preceding steps indicated the necessary procedure to estimate the required airflow in order to obtain the desired overall air temperature rise ∆T. However, it was also indicated that the actual operating airflow is determined by the intersection of the fan curve and the system resistance curve. There are three options available for estimating this operating point: (i) experimental measurement using a thermal/mechanical mockup of the system, (ii) calculation of the operating point using airflow network methods [1], or (iii) calculation of the system airflow using computational fluid dynamics (CFD) software (available from commercial software companies).
The experimental procedure can be used to measure the total airflow for specific fans or several pressure-airflow data pairs can be measured to develop a complete system resistance curve. The latter experimental method will then require the Designer to superimpose the selected fan pressure versus airflow curve and system resistance curve to obtain the operating airflow.
The airflow network procedure provides adequate results when the geometry is simple and the flow path within the cabinet is known or a rough estimate can be made. In many practical applications, however, the Designer deals with complex three dimensional flow paths that are not known from the very first instance. In these situations, CFD software can be used. The fan performance curve can be supplied as an input to the CFD software and the software system allowed to determine the operating point and system resistance. CFD works by numerically solving the governing equations of flow and heat transfer in three dimensions and takes into account the effects of turbulence and gravity. CFD can be used to study the performance of fans in series and parallel arrangements as well as optimize the location with respect to other objects inside the cabinet. Both of the computational procedures require a static pressure versus airflow curve for the fan in question.
Irrespective of which method is chosen to estimate the system airflow, all packaging systems are characterized by a system resistance curve of the type shown in Figure 3. System resistance curves may usually be expressed as a non-linear expression of pressure versus airflow:

where: ∆P = system pressure loss, K = a load factor specific to the system, n = a constant which varies between 1 and 2 depending on whether the flow is either completely laminar (n=1) or turbulent (n=2).
If the estimated value of the actual airflow is significantly less than the required value, the packaging system should be examined for regions where the airflow resistance could be reduced. Should it fail to provide an answer a different fan or perhaps even multiple fans should be considered. The search for a different fan is a simple matter of reviewing the catalogs of the various fan vendors. The consideration of multiple fans is a little more complex. 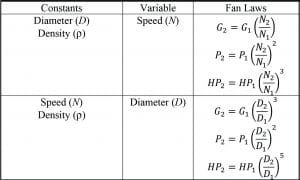 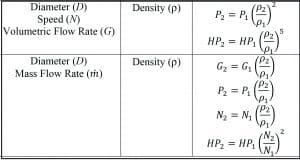 In addition to selecting a fan, there may be some choice in the location of the fan or fans, and in this regard, the illustration in Figure 4 may prove useful. The following comments should also be kept in mind with regard to fan location:
1. Locate components with highest heat dissipation near the enclosure air exits.
2. Size the enclosure air inlet and exit vents at least as large as the venturi opening of the fan used.
3. Allow enough free area for air to pass with velocity less than 7 m/s.
4. Avoid hot spots by spot cooling with a small fan.
5. Locate components with the most critical temperature sensitivity nearest to inlet air to provide the coolest air flow.
6. Blow air into cabinet to keep dust out, i.e. pressurize the cabinet.
7. Use the largest filter possible, in order to (i) increase dust capacity and (ii) reduce pressure drop. 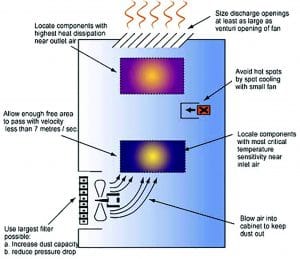 Are Graduate Engineers being Effectively Educated for Today’s Workplace?

Sponsored by Master Bond As advances in epoxy and silicone materials constantly evolve, manufacturers of advanced electronic systems will find that … END_OF_DOCUMENT_TOKEN_TO_BE_REPLACED

New and experienced engineers alike will learn details of where applications are headed and what to consider when designing and specifying components and systems. Processing and power conversion generate lots

New and experienced engineers alike will learn details of where applications are headed and what to consider when designing and specifying components and systems. Processing and power conversion generate lots of heat! An expert panel of presenters will answer your questions live, so please stay to the end if you want to participate in our Q&A.