To accurately compute the thermal resistance of a layered structure, such as the Junction-to-Case thermal resistance of a power semiconductor, the heat spreading inside the structure has to be considered. The calculation of the spreading resistance is not a trivial problem [1] and analytical solutions exist only for extremely simple geometries. Using Finite Element Analysis (FEA) the heat spreading and resulting temperature distribution can be accurately computed. But for a quick and simple analysis of the spreading resistance the thermal engineer has to resort to rules of thumb such as the 45° spreading angle [2, 3], or to approximation formulas which can be found in literature [1, 4]. This article presents an alternative approach, namely the concept of the effective heat spreading angle [5].

To explain this concept we consider a silicon chip on a copper (Cu) leadframe as shown in figure 1. A power of PH = 10 W is dissipated homogeneously on an active area of 1.01.0 mm2 on the 3.03.0 mm2 chip whereas the bottom temperature of the leadframe is kept constant (ideal cooling). 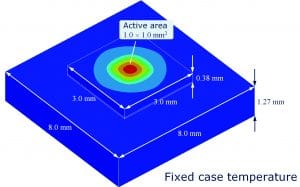 For simplification we shall assume that the heat flux is homogenously distributed over each cross section A(x) of the heat flow path (which is not the case in reality). At each position x the product of cross-sectional area A(x) and heat flux density p(x) equals the total power dissipation PH.

Furthermore we shall assume that the shape of the heat flow cross section does not change as the heat propagates (which is not true either); i.e.: in this case it remains a square area independent of the distance x from the chip surface. For the half side length y(x) of this square we obtain:

Because the cross sectional area Ai of each slice has been constructed such that Ai = PH/pi we have:

where θi represents the thermal resistance of the i-th slice such that if we multiply it by the total heat flux PH we obtain the correct temperature difference across that slice. Therefore the sum over all slices 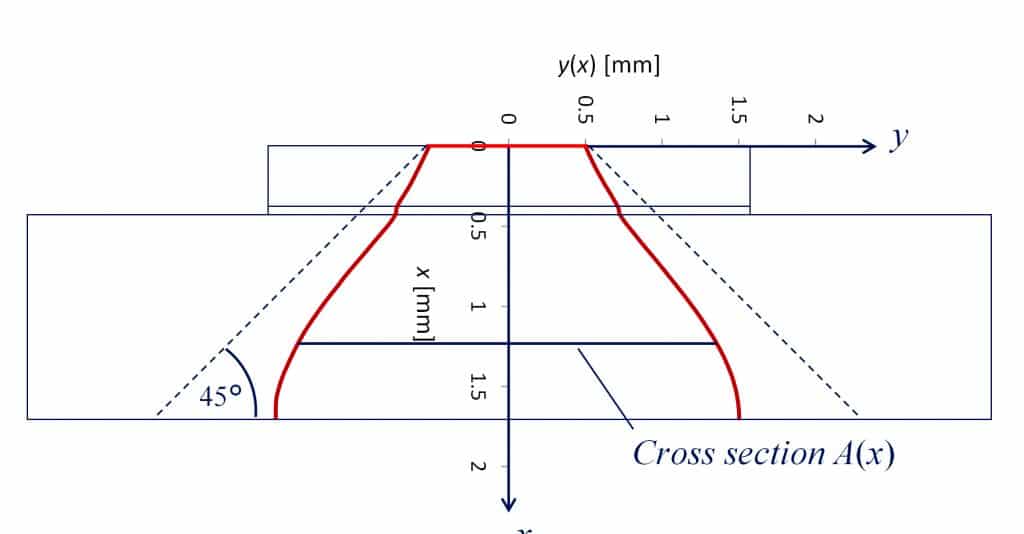 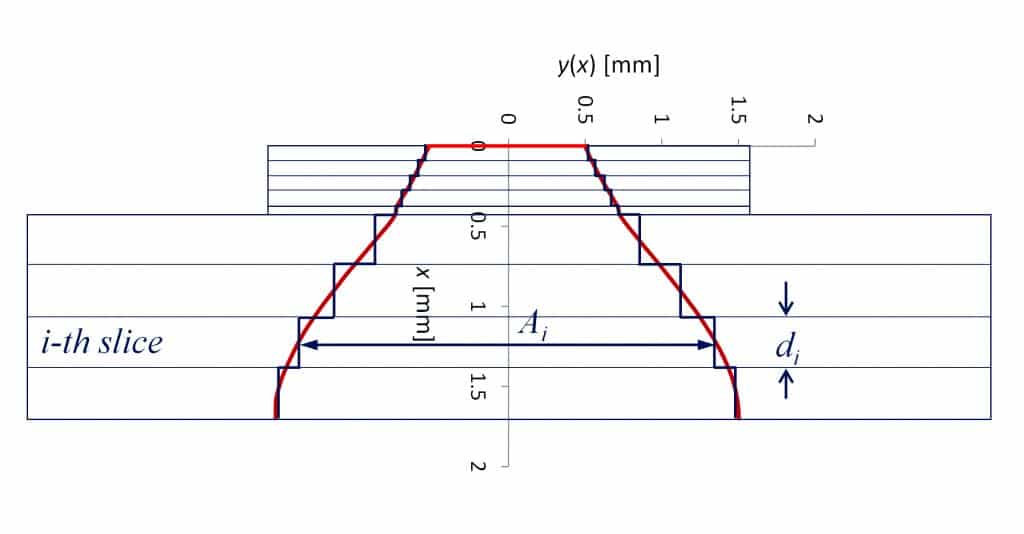 Based on the effective heat spreading profile y(x) the corresponding effective spreading angle can be easily computed (figure 5):

Using Equation (2) we obtain for the heat spreading cone with square cross section:

The attentive reader will now object: That is all well and good but how do I know the heat flux density p(x) along the heat flow path which is required to calculate the effective spreading profile? Which is a valid objection since p(x) can only be obtained by Finite Element (FE) simulation. There would be little motivation to perform a FE simulation to calculate the heat flux density since we could as well use the FE simulation to directly compute the temperature difference and thermal resistance between junction and case.
In the Author’s view the effective heat spreading concept serves two purposes. On the one hand it provides a clear definition of heat spreading cone and spreading angle which so far is often based on a somewhat vague idea of how the heat is spread inside a structure. Heat spreading cone and angle can be visualized which helps us to gain insight into spreading mechanism and influencing factors. Looking at figure 3 we see e.g. that the popular assumption of a 45° spreading angle is overly optimistic in that case. This is the educational aspect.
On the other hand the effective heat spreading concept also serves a practical purpose. As shown in [5] we can often find generally applicable rules for the effective spreading angle which are valid not only for one particular case/device but provide a good approximation for a whole sub-class of cases (e.g. all power semiconductors with solder die attach). Based on these rules and Equation (5) we can implement more accurate spreadsheet calculators for the thermal resistance of this sub-class of devices.

We could also try to define the spreading cone by a surface that intersects all isothermals at 90° angle thus ensuring zero heat flux across that border. But contrary to the approach presented above the resulting heat spreading cone would be useless when it comes to computing the associated thermal resistance since the heat flow density over parallel cross sections of the spreading cone is not constant.

All You Need to Know About Fans

Sponsored by Master Bond As advances in epoxy and silicone materials constantly evolve, manufacturers of advanced electronic systems will find that … END_OF_DOCUMENT_TOKEN_TO_BE_REPLACED