Plastic components are designed so that the heat is dissipated by forced or natural convection. The use of plastic packages under conditions where neither cooling method is available introduces new challenges.

High heat-dissipation plastic packages require a large-area solid heat sink in order to transfer the heat into the copper thermal lands on the printed circuit board (PCB). The difference in temperature between the component and the PCB must be as small as possible and this can be achieved by having a highly conductive thermal interface.

The purpose of this work is to investigate a standard thermal interface assembly method between the components and the PCBs. As an example, the thermal interface under a 208 Lead Plastic Quad Flat Pack (PQFP) was modelled using a Computational Fluid Dynamics (CFD) program.

A photograph of the cross section of the thermal-paste/copper/solder thermal interface can be seen in Figure1.

A plastic-encapsulated microcircuit consists of a silicon chip, a metal support, wires that electrically attach the chip circuits to the leads, and a plastic epoxy encapsulating material. There is a risk of package failure if the component is allowed to operate outside its limits. The potential accelerations of failures are moisture, contaminants, and temperature extremes, rates and cycles. An important factor in plastic package failures is the low thermal conductivity of plastics. The low thermal conductivity of the plastic increases the die temperature, and in a large component this can cause large temperature gradients in the package, which can result in die cracking, de-lamination, deformation of interconnections and encapsulant cracking. The choice of plastic packages must take account of their reliability, which is influenced by the differential between the package operating temperature and its temperature limits.

A Typical 208 Lead PQFP Assembly
This section discusses the materials used in the construction of a typical 208 Lead PQFP. The package consists of the plastic encapsulant, the lead frame, the die, the bond wires and the die attach.

The Lead Frame
The lead frame consists of a die mounting paddle and lead fingers. The purpose of the die paddle is to mechanically support the die during package manufacture. The lead fingers connect the die to the external circuitry.

The lead frame is usually made from a Copper alloy such as Cu-Fe, Cu-Zr or Cu-Mg. The thermal conductivity of these alloys can be seen in Table 1.

Table 1: Properties of common lead frame materialsDie Attach Materials
Die attach bonding is used to mechanically attach the die to the lead frame, and also to provide a heat flow path to the lead frame. A typical adhesive is a thermally conductive epoxy composite with a thermal conductivity of 0.8 W/mK. The epoxy adhesive layer is typically 25µm thick.

The Bond Wires
Wire bonding is the most commonly used technique in the plastic package interconnection technology. Gold wire is the most preferred material, on account of its high oxidation resistance and low work hardening characteristics. The thermal conductivity of the gold wire is 219 W/m°C.

The Plastic Encapsulant
In general, the majority of chip packages use Novolac-based epoxies. The moulding compound is modified by additives which improve its mechanical strength, adhesion to package components, chemical resistance, electrical resistance, coefficient of expansion match and thermal and moisture resistance in the operational temperature range.

The thermal conductivity of a typical Novolac-based epoxy is 0.67 W/mK with a glass transition temperature of 150°C.

The Thermal Interface
The thermal interface assembly is outlined in Table 2.

The wire bonds and the leads were modeled as blocks. In order to achieve the correct thermal resistance, the thermal conductivities of the wire bond and lead blocks were modified in the same ratio as the cross-sectional areas of the model and the real wires. The model can be seen in Figure 2. The thermal conductivities used in the model can be seen in Table 3. 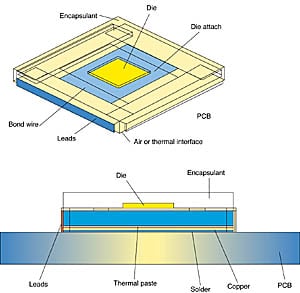 Table 3: Thermal conductivities used in CFDTwo different thermal interfaces were considered: thermal paste only and thermal-paste/copper/solder interfaces. The maximum power dissipation for a typical 208 lead PQFP is assumed to be 1W. Four different CFD models were constructed, and these can be summarized in Table 4.

Table 4: CFD modelsThe components are predominantly conduction cooled. It was, therefore, assumed that the heat was transferred from the chip, through the leads and the bottom of the component, to the board by conduction only. The PCB – with typical dimensions of 0.2 x 0.15 x 0.003 m – was modeled as a block with a thermal conductivity of 15 W/mK. The boundary condition was specified at the edges of the board. The boundary temperature was chosen as +85°C with a thermal resistance of 0.4°C/W which is the value for a typical wedge lock.

Temperature distribution for the components, dissipating 1W, with the thermal-paste/copper/solder interface, can be seen in Figure 3. 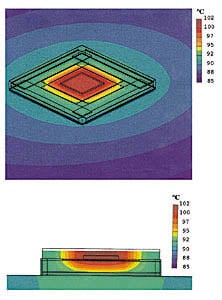 Power = 1W
Figure 3: Thermal-paste/copper/solder thermal interface CFD modelIf the gap under the component is such that using a shim interface is impractical, then only thermal paste should be used. The temperature distribution in the PQFP if only thermal paste is used, can be seen in Figure 4. 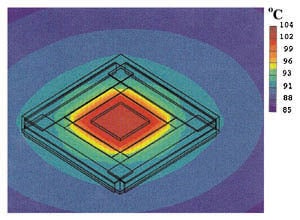 Power = 1 W
Figure 4: Thermal-paste thermal interface CFD modelThe paste must be cured before re-flow, otherwise out-gassing will occur during re-flow. It is, however, very difficult to achieve a perfect interface without any air gaps under the component when the thermal paste is cured before re-flow. In practice air gaps under the thermal paste will exist. If air gaps exist under the component, then there is a risk of trapping contaminants and flux, which cannot be cleaned during the PCB cleaning process. This air gap will also increase the thermal resistance. The air gap – 0.08 mm thick – under the thermal interface was modelled and the temperature distribution can be seen in Figure 5. 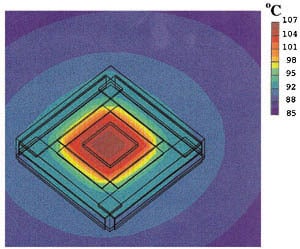 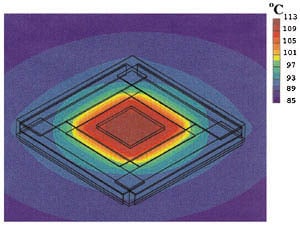 Power = 1 W
Figure 6: No thermal interface CFD modelThe summary of all the results can be seen in Table 5.

Table 5: Summary of the CFD resultsThe reliability of the package is influenced by the differential between the operating temperature of the component and its maximum allowable temperature limit. The conclusion from this analysis based on the CFD results, summarized in Table 5, would be to use the thermal-paste/copper/solder interface as the temperature reduction is large. The other advantage of this type of interface is that the risk of entrapment of contaminants under the component is eliminated.

Sponsored by Master Bond As advances in epoxy and silicone materials constantly evolve, manufacturers of advanced electronic systems will find that … END_OF_DOCUMENT_TOKEN_TO_BE_REPLACED