Electronic designs for application in innovative products that use higher powers in miniature systems are rapidly developing. This phenomenon has led to a dramatic increase in chip densities and power densities, as well as a continuous decrease in physical dimensions of electronic packages. Hence, thermal management continues to be one of the most critical areas in electronic product development. Similarly, advances in thermal management will significantly impact the cost, overall design, reliability, and performance of the next generation of weapons technology, which heavily uses microelectronic devices. In electronic cooling, as Azar [4] forecasted, heat fluxes of 1000 W/cm2 will become a reality in the foreseeable future. Therefore, air may become impractical as a coolant; hence innovative liquid cooling ideas are receiving more attention.

In the world’s cold regions, such as Alaska, nanofluids may be very effective in such roles as household baseboard heating fluids and as coolants for automobiles and industries. Normally in these regions, 60:40 ethylene glycol/water or propylene glycol/water solutions are common choices due to their low freezing points. Therefore, for our analysis we investigated these fluids.

Simons [5] presented the effectiveness of various liquid coolants using the Mouromtseff number. The Mouromtseff number [6] is a Figure of Merit (FOM) for heat transfer fluids. Simons’ approach was further extended by Ellsworth [7]. A higher value of FOM for a fluid indicates better heat transfer characteristics. In electronic cooling, nanofluid flow through microchannels shows promise in removing high-density heat flux. In the present article we have extended the analysis of Simons to different nanofluids, which hold promise as a next generation liquid coolants.

The Mouromtseff number is given by

(1)where κ, ρ, cp and μ are thermal conductivity, density, specific heat and dynamic viscosity of the fluid respectively. The exponents a, b, d, and e take on values appropriate to the heat transfer mode of interest and the corresponding heat transfer correlation. For a specific nanofluid, these thermo-physical properties depend on the nanoparticle material, base fluid and the nanoparticle volumetric concentration. Simons [5] showed the comparison of heat transfer rates for various typically used coolants with respect to water.

The thermal conductivity of a nanofluid is given by [3]

The effective density of nanofluids is given by [8]

where ρnf is the nanofluid density and ρs and ρf are the densities of the solid particles and base fluid, respectively.

The specific heat of nanofluids, cpnf, can be calculated using the standard equation based on the volume fraction.

Various researchers have measured viscosities of several nanofluids. Kulkarni et al. [9] presented a correlation for the temperature dependency of viscosity for copper oxide nanoparticles in water using a Brookfield viscometer at different volume concentrations. The correlation is

where μs is the suspension viscosity in mPa-s (cP), T is the temperature in Kelvin, and A and B are polynomials which are functions of volumetric concentrations φ. These factors are given as

The following results (Figures 1, 2 and 3) are based on an average particle diameter of 50 nm and a mean velocity of 1 m/s for the same tube diameter. Further analyses for velocities of 5 m/s and 10 m/s and particle diameter of 100 nm indicate that similar trends are preserved for all nanofluids. The properties of various nanofluids used for further analysis are given in Table 1. 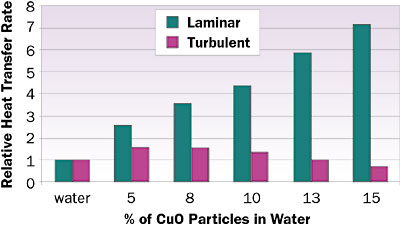 Figure 3 shows the comparative heat transfer rate for 60:40 ethylene glycol/water and 60:40 propylene glycol/water with different concentrations of copper oxide nanoparticles for turbulent flow. Although these results show that pure water has a better FOM than these nanofluids under turbulent conditions, glycol solutions must be used in cold regions where fluid freezing is a serious problem. A concentration of 5% appears optimal for both of these nanofluids. These findings agree with the characteristics exhibited in Figure 1. It is also worth noting that the FOM of ethylene glycol is much better than propylene glycol.

Researchers are working on finding the compatibility of nanoparticles with pumps, valves and plumbing fittings. However, no definitive results have been published yet, because of the long-term experiments. It is generally thought that due to the small size of nanoparticles, wear on the surfaces will be minimal. We bought ready-to-use nanofluids. During the period of experiments conducted on the nanofluids, which lasted over several months, no agglomeration was observed. The cost of ready-to-use nanofluids is much higher than the traditional heat transfer fluids. For example, the authors recently purchased 500 gm (about 0.5 liter) of aluminum oxide nanofluid with a 50% concentration in water by weight for $120.00. By contrast, an equal volume of a traditional heat transfer fluid costs only $15.00 to $20.00.

Synthetic jets for forced air cooling of electronics
Next Post »

Sponsored by Master Bond As advances in epoxy and silicone materials constantly evolve, manufacturers of advanced electronic systems will find that … END_OF_DOCUMENT_TOKEN_TO_BE_REPLACED