A team of IBM researchers in Switzerland is experimenting with a micro network of copper tubes that run through smaller, clustered computer servers and whisk away heat with the help of warm water. Liquid cooling, even with warm water, is 4,000 times more effective than air cooling at removing heat, they say. Researchers from IBM and the Swiss Federal Institute of Technology in Zurich report in the April 16 issue of Science that early testing of a supercomputer they created and dubbed Aquasar indicates it uses half the electricity of a supercomputer cooled with cold water (which requires electric chillers to keep the water at about 15 degrees C). Aquasar uses 60-degree-Celsius water instead of air as its coolant to capture and remove heat. 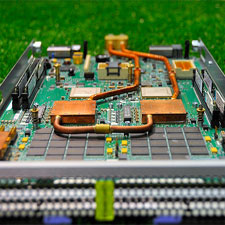 Aquasar, a supercomputer built by IBM and ETH Zurich, will have water-cooled IBM blade servers as the one pictured. © IBM RESEARCH – ZURICH/MICHAEL LOWRY

Sponsored by Master Bond As advances in epoxy and silicone materials constantly evolve, manufacturers of advanced electronic systems will find that … END_OF_DOCUMENT_TOKEN_TO_BE_REPLACED

Statistical analysis is needed because data always have some degree of uncertainty; a value that we determine from a single measurement, or … END_OF_DOCUMENT_TOKEN_TO_BE_REPLACED