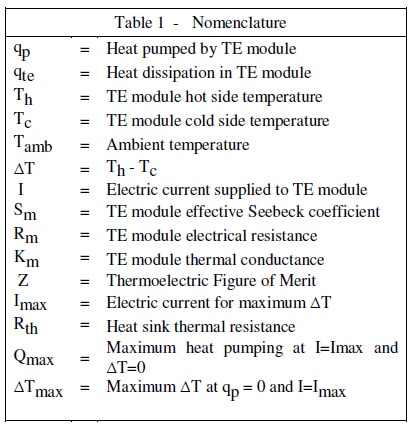 for many years. Thermoelectric (TE) cooling modules offer the potential to either reduce component operating temperatures at a given heat load, or allow higher component heat dissipation at a given temperature level. Readers who are unfamiliar with TE cooling modules may be interested in several articles on the subject previously published in Electronics Cooling [1-5]. This article is intended to present to the reader a method to estimate the cooling performance of TE cooling modules in actual applications using readily available vendor data.

Figure 1 provides a typical example of a TE module cooling application. In this application, a TE cooling module is sandwiched between an electronic module dissipating heat and a heat sink rejecting heat to the cooling air. By passing electric current through the TE module in the appropriate direction, the side attached to the electronic module (Tc) becomes cooler, lowering the temperature of the component, and the side attached to the heat sink (Th) becomes warmer, providing a greater temperature difference for heat rejection to ambient (Tamb). In effect, the TE module “electronically” pumps the heat (qp) dissipated by the component from the cold side to the hot side of the TE module. Of course nothing is free and the penalty that must be paid in this case is the Joule heating (qte) that takes place as current flows through the array of thermoelectric couples comprising the TE module. It should be noted at this point that, for steady-state operation, the heat pumped by the TE module must be equal to the heat dissipated by the electronic component being cooled and the heat rejected to the cooling fluid by the heat sink will be equal to the sum of the heat pumped by the TE module and the Joule heating within the TE module.

In an earlier article, Luo [5] presented the following equations for heat pumping with a thermoelectric cooling module

and the corresponding TE heat dissipation

in terms of the module parameters defined in the nomenclature. In addition to the above two thermoelectric equations we have the following heat transfer equations relating the TE module hot side temperature to the temperature of the ambient cooling fluid

Before these equations can be applied to a specific TE module it is necessary to know the values of the TE module parameters Sm, Rm, and Km. These values are not provided by TE module vendors, instead vendor data sheets will usually provide the values of Qmax, Imax and ΔTmax at a specified hot side temperature.  However, Luo’s article developed equations which may be used to obtain the necessary TE module parameters from vendor data. These equations are as follows:
(4)

and then solving this equation for Th we obtain,

which may then be substituted into equation (1) to obtain equation (10) for qp as a function of the specified cold temperature, Tc

Alternatively, equation (10) may be rearranged to solve for Tc as a function of the heat pumped, qp, which as noted earlier equals the component heat load,

Using the above values in equations (4-7) the required TE module parameters are determined to be:

These values are then used in equation (11) to generate values of TE cold side temperature for a range of TE electric current values, three different values of heat sink thermal resistance (i.e., 0.25, 0.50 and 0.75oC/W) and a cooling fluid temperature of 30oC. The results of these calculations are shown in Figure 2, illustrating the benefit derived by using a TE module for this application. For example, the minimum cold side temperatures of 53.6, 36.2 and 15.2oC obtained with the TE module-heat sink combination compare quite favorably to the heat sink base temperatures of 60.0, 50.0 and 40.0oC obtained with the heat sink alone.

Another important consideration when using TE modules is the electrical power that must be supplied to achieve the desired cooling effect. A relative measure of this is the COP or Coefficient of Performance. Some readers may recall the definition of COP from their undergraduate thermodynamics course, which is the ratio of heat transferred to the work input. In this case the COP of a thermoelectric cooling module is the ratio of qp in equation (1) to qte in equation (2). COP as a function of electric current for the present example is shown in Figure 3. Although  a slightly  different COP curve resulted for each of the three heat sink thermal resistances considered, the differences were so small that only one curve is shown (i.e., for Rth = 0.25oC/W). Since the heat pumped in all cases is equal to the component heat load of 40 W, the COPs in Figure 3 indicate that the amount of power required for the TE module varies from 15.5 W at 2.5 amps to 102 W at 6 amps.

The equations presented here should provide a useful tool for an early estimate of whether or not a particular TE module may provide useful cooling enhancement. However, the reader is cautioned to remember that these equations may not be expected to provide exact results. Inherent in the equations and derivations presented is the underlying assumption that the thermal and electrical properties of the TE module are constant, which is certainly not the case. For example, Luo’s [5] comparisons with vendor’s software results showed differences in predicted heat pumping values of 3 to 11%. It is expected that similar uncertainties can exist in the method presented here.

Thermal Facts and Fairy Tales: Uncertainty is Assured
Next Post »

The Uses of Simplicity in Thermal Analysis

Sponsored by Master Bond As advances in epoxy and silicone materials constantly evolve, manufacturers of advanced electronic systems will find that … END_OF_DOCUMENT_TOKEN_TO_BE_REPLACED