The JESD51-14 standard was published in November 2010, prepared by the JEDEC JC-15 Committee on Thermal Characterization. It outlines a new process to measure what is the most common IC package thermal metric, Theta_jc. This is the thermal resistance between the die and the package case face. More specifically the face of the package that is to be cooled by an external heatsinking method. Theta_jc wasn’t a new metric that required a new method to be proposed to measure it so what was the motivation for this standard? You can learn more about something when considering -why- that thing was done beyond -what- the thing actually is.

The primary use of Theta_jc is as a comparison metric to enable end users to judge the relative thermal performance of different packages, often from different suppliers, to determine which is thermally more attractive (i.e. the one with the lower Theta_jc, or a more cost effective Theta_jc). To enable decisions based on such comparisons to be made successfully one would need to ensure that all Theta_jc values have the same, and small, measurement error. And yes, even measurements have errors, as do simulations, in fact nothing is ‘accurate’, the only thing to strive for is usefulness. Sorry, best to stop there before things get a bit too philosophical. Thermocouple approaches introduce too many large and variable errors. It was this that fact that drove the need for a new standard for the measurement of this prince of thermal metrics. 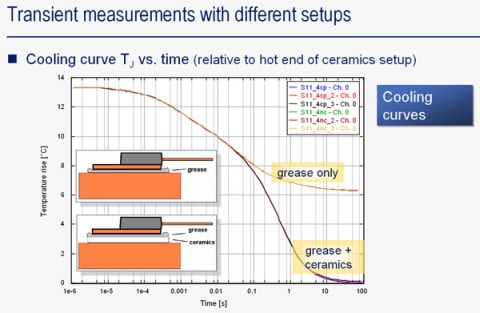 JESD51-14 details the ‘Transient Dual Interface Method’ (TDIM) testing approach. I won’t attempt to a better job at describing the method than Andras Poppe has already done in a previous blog. I will however shamelessly copy his picture that gives a graphical overview. It’s a neat concept. Change the condition over the whole case face between two transient (power down) measurements and note the dT in time at which the Tj vs. t curves deviate.

I have come across many questions and been part of a few deep discussions about the comparison between thermocouple and TDIM measured Theta_jc values. Are they comparable? If so, how? Most of the time such discussions turn back to the basic fact that JESD51-14 details a repeatable approach to determine a thermal metric that can be used during component selection phase of the design process. Safe ground.

However these discussions start up again when people start using Theta_jc for prediction / simulation purposes.

“But it’s only meant to be a metric!”

“Can’t you get a detailed FloTHERM model?”

—”Tried that, the supplier wouldn’t provide it, too much proprietary info would be contained within it”

“What about entering into an NDA with them to cover the supply of a detailed model?”

It’s the lack of thermal models that is driving thermal engineers to use whatever they can for simulation purposes. Theta_jc included. Next time I’ll cover some pros and cons about doing this.

Sponsored by Master Bond As advances in epoxy and silicone materials constantly evolve, manufacturers of advanced electronic systems will find that … END_OF_DOCUMENT_TOKEN_TO_BE_REPLACED

Professionals in the automotive, semiconductor, aviation, aerospace, lighting, power, electronics, and other industries depend on 24/7 reliability in their devices, in all conditions. Attend to learn how you can eliminate

Professionals in the automotive, semiconductor, aviation, aerospace, lighting, power, electronics, and other industries depend on 24/7 reliability in their devices, in all conditions. Attend to learn how you can eliminate heat-related product and component failures in your systems at this unique and interactive thermal management conference.

In this webinar brought to you by CPC, you will learn six tips on the design and operation of liquid cooling for electronics systems. Through presentation and a lively panel

In this webinar brought to you by CPC, you will learn six tips on the design and operation of liquid cooling for electronics systems. Through presentation and a lively panel discussion, you will gain an understanding of the steps that you can take to optimize liquid cooling for any variety of applications while still in the initial design phases. This is a not-to-be-missed event for engineers of all experience levels and interest in liquid cooling. Panelist include:

The 2021 SAE Thermal Management Systems Digital Summit (TMSS) is the premier convening point for forward-thinking engineers, executives, OEMs, and academia to collaborate and hear a range of presentations on

The 2021 SAE Thermal Management Systems Digital Summit (TMSS) is the premier convening point for forward-thinking engineers, executives, OEMs, and academia to collaborate and hear a range of presentations on the latest technologies, regulations, and applications for thermal management systems.

TMSS is where industry comes together to discuss the latest regulatory impacts and applications to reduce engine emissions, conserve energy, reduce noise, improve the cabin environment, and increase overall vehicle performance in the passenger and commercial vehicle industry.

Join us online and on-demand for three days of expert-led discussions as we cover the most critical need-to-know information impacting global thermal management today and in the near future.

Electronics Cooling’s Thermal LIVE™, the world’s largest online thermal management event, returns for its 7th year this October. The three-day program features experts in the thermal management field, presenting live educational sessions on industry challenges, trends, and products. Past topics have included advanced thermal techniques in power electronics, design and manufacturing of blind mate couplings, selecting TIMs for different applications, calculations, and design elements for liquid cooling, and more. If you’re an electronics or mechanical engineer who works with thermal management, this event is a can’t-miss.