Hybrid-electric and all-electric airplanes under study by NASA, such as the X-57 Maxwell, could operate more efficiently if the overall system was better at getting rid of heat. (Source: NASA)

Future hybrid-electric and all-electric airplanes will use distributed electric propulsion (DEP), relying on multiple electric motors rather than a single or handful of jet fuel-based props or jet engines. As an example, consider NASA‘s X-57 Maxwell (pictured above). NASA researchers chose to name the aircraft “Maxwell” to honor James Clerk Maxwell, the 19th century Scottish physicist who did groundbreaking work in electromagnetism. X-57 is a unique all-electric aircraft which features 14 propellers along its wing, 12 on the leading edge for takeoffs and landings, and one larger motor on each wing tip for use while at cruise altitude.

Those 12 small motors will produce megawatts of energy and require large amounts of heat to be rejected. Simply adding a cooling system to the X-57’s design would increase bulk and require design changes that would negatively impact the aircraft’s performance. Unlike traditional aircraft, this waste heat has low rejection temperatures (<200 C). If this heat is not managed effectively the motors will operate with less than optimal efficiently. To minimize the heat load, a new power system consisting of highly efficient motors and generators, as well as an advanced AC‐AC converter, is being developed by NASA’s High-Efficiency Electric Aircraft Thermal Research (Heather) project.

Achieving the intended benefits of DEP presents a unique set of challenges. For starters, electric aircraft lack a simple way to reject waste heat from the powertrain. While conventional aircraft reject most of their excess heat in the exhaust stream, for electric aircraft this is not an option. Nor are solutions that keep high-powered electric motors and electronics cool by resorting to extra mass and complexity that negate the efficiency benefits of electric propulsion; traditional cooling can represent over half the mass associated with full electric power propulsion systems, resulting in a significant negative impact on fuel efficiency. In addition, the traditional method of using jet fuel to cool aircraft generators introduces spark-ignition hazards that are also associated with alternative, cryogenic cooling fluids.

Further complicating matters are two considerations: a) components usually do not have the ability to reject heat through finned heat sinks that are exposed to incoming ambient air; and b) the thermal performance of high-power batteries, wires, high-lift motors, and the aircraft’s outer surface all must be tracked transiently, since they usually do not operate in a steady-state equilibrium (given the impact of things like gusts of wind on aerodynamics, for instance).

Sydney Shnulo is a Research Aerospace Engineer in the Propulsion System Analysis Branch at NASA Glenn in Cleveland, Ohio. She is currently the modeling lead for the Heather Project. At last month’s iTherm 2019 conference Shnulo addressed the topic of thermal modeling in the context of a full aircraft system and specifically spoke to work being done for the Heather   project.

Shnulo noted that to reject heat is going to involve a very substantial thermal management system and airplanes don’t like to weigh a lot. She said that researchers found that a 20% increase in the weight of the power system resulted in a 5% increase in fuel burn, “so that’s almost completely negating propulsion airframe integration benefits”.

The need for a lightweight, high-efficiency power distribution system with flight critical reliability has led to requirements for weight reduction as well as improved efficiency. Higher efficiency reduces losses and makes thermal management more achievable in an aircraft. Ultimately, Heather engineers’ biggest challenge in making all of this work is to find a new design for the entire power system, from electric motors to power distribution.

One approach has been to minimize the heat from the whole power system by finding different ways of designing the power-related components themselves and coming up with different ways of putting those components together inside the aircraft. Shnulo reported that the team was building an optimal power system as part of Heather. “What we want to do is develop components that are about 99% efficient, and then do a single AC to AC conversion step. So then you don’t have two sets of losses and if we can also make it highly efficient we can reduce that heat even more,” she said. 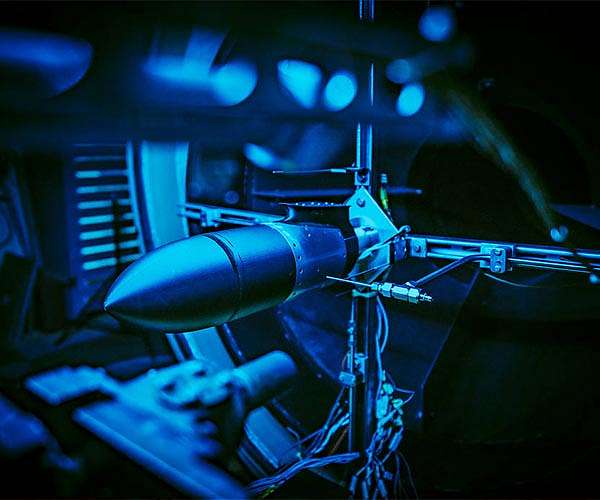 On the X-57 Maxwell a new cooling nacelle design (the aluminum section behind the nose cone) was developed. (Source: NASA)

New ideas for shedding and reducing heat are being considered, including using the outside skin of the aircraft itself as a type of heat sink. On the X-57 Maxwell engineers devised a custom-designed nacelle, around the aircraft’s motor electronics to significantly cool them without changing the aircraft’s shape or design. This new cooling nacelle design was proven effective during wind tunnel testing (photo above) where engineers subjected one of the X-57’s motors to various simulated flight conditions.

On the software side researchers are doing computational fluid dynamics (CFD) on the whole aircraft to understand where on the aircraft is the best place to reject heat. Sydney Shnulo leads Heather modeling. “So going back to just how conventional aircraft modeling works,” she said at ITherm, “we have our aircraft and our mission model and we have our propulsion system model. In the past it was easier. It was two different models, two teams talking to each other, a couple of iterations needed to close the loop.  But now with electrified aircraft propulsion, we have other major subsystems that we need to examine such as power system modeling, which informs engineers about the heat that goes into the electric power system.”

The current modeling plan aims to understand fuel burn and the performance of the aircraft at the highest level “to understand if this conceptual aircraft we’re working on is worth moving forward with”. Right now, she added, the way things are done is by having a modeling lead telling all the sub-teams what the models show. On the X-57 three unstructured-mesh, Navier-Stokes CFD methods–FUN3D, USM3D and Kestrel–were used to predict the performance buildup of components to the full X-57 configuration.

There is even an optimized cable thermal management modeling scheme. The cables that carry power from the batteries to the motors pose a thermal challenge due to numerous design constraints.  Basically, you have to have enough insulation because they’re very high voltage to prevent arcing, but you can’t have too much. The wires must also provide sufficient electromagnetic interference (EMI) shielding, and be flexible enough to route through the numerous motor nacelles.

“We would love an integrated interface,” said Shnulo, since the power system people like to work in MATLAB, the propulsion system model is in NPSS and the thermal management system model lives in different software still. “What we really need is to get those all speaking to each other, so that we could size these systems at the same time.” The way it’s being tackled by Heather engineers is they have the aero, the propulsion, the flight dynamics, the power system, and thermal management all modeled and joined into a complete aircraft model.

Sponsored by Master Bond As advances in epoxy and silicone materials constantly evolve, manufacturers of advanced electronic systems will find that … END_OF_DOCUMENT_TOKEN_TO_BE_REPLACED