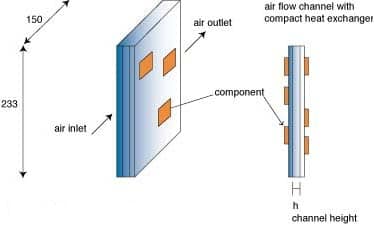 Thermal control has always been an important part of the design criteria for
airborne electronics on account of the following two characteristics:

In the seventies, it was discovered that natural convection alone in the
airborne environment was unsuitable for keeping the component junction
temperatures at reasonable levels. As air is widely available on aircraft,
thermal engineers naturally orientated more of their designs towards forced
convection.

There are two objectives in the thermal control of airborne electronics:

To meet our goal, the component case temperature must be:

Tjunction
< 90°C for a maximum junction temperature (Tjunction max) of
150°C given by the component manufacturer, for normal conditions covering
90 to 95% of the flights,

To design an air cooling circuit, the engineer must consider carefully the
following parameters.

Electronic circuit board power dissipation surface density: For
power dissipation densities less than 500 W/m2 (0.05 W/cm2)
on the surface of a fully populated PCB (Printed Circuit Board), free convection
is favored. For power dissipation densities greater than 4000 W/m2
(0.4 W/cm2), forced air cooling should not be used, regardless of
the velocity that can be obtained, and more efficient cooling techniques (heat
pipes, liquid cooling, boiling) should be considered [1]. This upper limit for
forced air cooling is dictated by the fact that heat sinks cannot be used on the
circuits due to the lack of space in avionics racks. The boards are designed for
a minimum pitch. In between these two limits, forced convection is well suited.

Environment: Although air is readily available on an aircraft,
different qualities of air do exist and may determine differences in designs.

Pressurized bay: this is the most favorable case because forced air
cooling can be obtained using a fan. The designer can:

where p and cp are the air specific mass and specific heat.

It is important to check that the air velocity obtained on each circuit
provides a convective heat transfer coefficient sufficient to limit the
temperature gradient between the components and the air. If not, it will be
necessary to check the uniformity of air flow distribution on each board. Local
heat sinks can also be used on high power components, if space is available.
Alternatively, a more powerful fan can be selected.

Depressurized bay: the decrease of air density when the altitude
increases must be taken into account when choosing the fan. It is important to
check that the component temperatures will remain within the prescribed limits.

which means that the mass flowrate will decrease at the same rate as air
density, which in turn will yield a greater air temperature increase going
through the electronic equipment. This may not be compensated by the static air
temperature decrease which occurs with altitude.

which means that the pressure delivered by the fan will decrease but will be
compensated by the decrease of pressure loss at Qv. The motor glide
may change with air density, which will have an impact on the fan flowrate and
delivered pressure and thus sh should not be neglected, especially if the
altitude range is wide.

Then the design steps are the same as those applied to the previous case.

Aircraft Environment Control System (ECS) air: aboard an aircraft,
especially fighter aircraft, there exists an ECS which can provide cool air to
electronic equipment. Flowrate and pressure can generally be provided in
sufficient quantities to cool electronics efficiently.

This type of forced convection cooling creates problems due to air
pollution. This air contains particles such as dust, sand, metals and fluid
droplets, typically oil, kerosene and liquid water.

It is therefore unwise to pass this air directly over the electronic
components due to the risk of decreased reliability from micro short-circuits,
abrasion or chemical degradation of the components.

Electronic equipment should be designed to avoid contact between the
components and the pollutants: air is passed through cold plates installed
either directly at the board level (see Figure 1) or at the rack level (see
Figures 2 and 3). 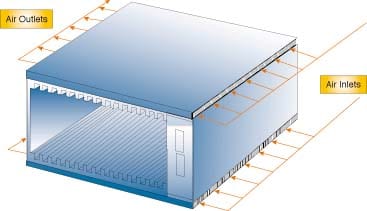 Figure 1 shows a compact finned cold plate embedded in a double sided
circuit. This is an Air Flow Through module (AFT). The heat generated by the
electronic components is transferred first by conduction through the board and
then by forced air convection. The forced convection heat transfer coefficient
is enhanced by the compact fins of the cold plate. Air is usually directed
along the width of the circuit boards in order to limit the pressure drop.

Figure 2 shows a rack which has two cold plates cooled by ECS air. The rack
includes circuit boards which are cooled by conduction enhanced by a metal
(generally aluminum or copper) plate in contact with the wall cold plates
through thermal clamps located on each side of the circuit as shown on Figure 3.

Two kinds of design tools are required for the analysis of the forced
convection cooling methods described in the previous paragraphs:

Iterations are generally necessary between the two types of calculations to
converge to a satisfactory solution. 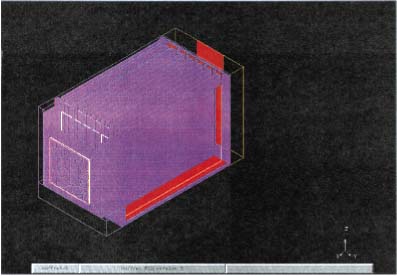 Figure 4. Direct air forced convection in a board
rack

Figure 5. Air distribution in between the boards 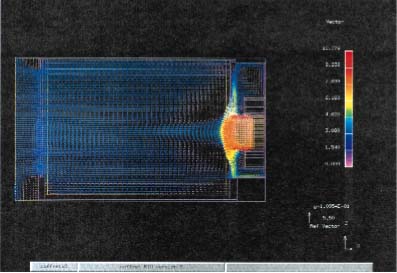 Figure 6. Air velocity on one of the rack boards

Thermal analysis: Once the boundary conditions have been obtained
from the CFD calculation, a thermal analysis may be performed on any part of the
circuit. However, two other essential points must be considered:

Figure 7 gives an example of the thermal analysis performed on one of the
circuits of the previous rack, using a board level thermal analysis tool, VTAT
(Visula Thermal Analysis Tool) of Zuken Redac. 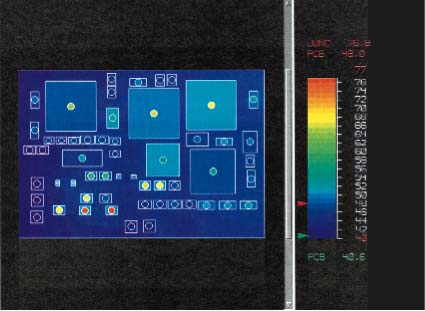 Figure 7. Thermal analysis on a board using VTAT

Based on previous work conducted within Thomson-CSF – including both CFD
calculations and thermal analysis checked with experiments – a ranking of the
three different types of forced convection described at the beginning i.e.
direct air forced convection, AFT and conduction cooled modules in an air cooled
rack, can be created.

The ranking is as follows:

1. Direct air forced convection on components may authorize power
dissipation densities on a fully populated board, up to 3000 W/m2,
with an air velocity in the range of 5 m/s. This type of design requires
non-polluted air and a powerful fan on account of the high velocity of 5 m/s
which will generate high pressure drops.

2. An AFT may allow power densities up to 3000 W/m2 or more,
but with a very large pressure drop penalty. For 3000 W/m2, the
pressure drop will be in the order of 5 mbar for a 100 mm wide module which
yields, for a 200 mm wide classical module, a total pressure drop of 10 mbar,
not accounting for the distribution and collecting air chambers [1].

3. Conduction cooled modules in an air cooled rack are limited to power
densities up to 1500 W/m2, due to the parabolic temperature gradient
from conduction in the metal plate embedded in the PCB (see Figure 8). 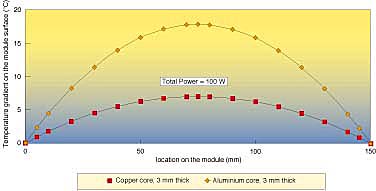 Figure 8. Termperature gradient in a metal plate
embedded in a 150mm wide board

Thermal control of airborne electronics has allowed the development of the
advanced air forced convection cooling techniques which have been presented
here. Furthermore, increases in power dissipation densities combined with the
constraint of lightness will require the investigation of even more efficient
cooling techniques such as liquid flow through modules, flat heat pipes and
direct evaporation. The two latter techniques still require improvements before
use on board aircraft on account of their sensitivity to stressed mechanical
environment.

A practical formula for air-cooled boards in ventilated enclosures

Sponsored by Master Bond As advances in epoxy and silicone materials constantly evolve, manufacturers of advanced electronic systems will find that … END_OF_DOCUMENT_TOKEN_TO_BE_REPLACED