Introduction and Description of Fan Types

Small ventilators are generally called fans. Depending on the geometrical design of the impeller, various constructional types are distinguished to indicate the main direction of the airflow. Here are the descriptions of the most important types of fans:

Axial Fans
Axial fans are characterized by their typical impeller form, which resembles a propeller (Figure 1). The air flows through the impeller essentially in parallel to the axis, giving rise to the nomenclature employed. The blade geometry required for different versions is generally calculated with a computer; e.g., using a CAD system. Axial fans for electronic cooling are usually equipped complete with an outer housing and an electric motor integrated into the impeller hub. This compact construction enables equipment installation in a minimum of space. 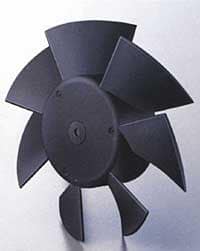 Figure 1. Impeller of an axial fan.

Radial Fans
The appearance of the impeller in a radial fan is somewhat similar to that of a water wheel (Figure 2). Air intake occurs in an axial direction. The air passes through the impeller radially. Depending on whether the exhaust angle of the blade is greater or less than 90o, the blades are called forward or backward curved. A special type of the impeller is the so-called drum rotor, which is equipped with a large number of short, forward-curved blades. In radial fans for electronic cooling, the drive motor is conventionally located in the suction area of the fan. This reduces the flow rate to a certain extent, but enables a compact design to be realized. 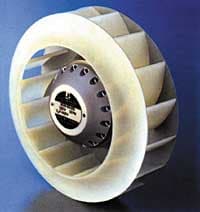 Mixed-Flow Fans
Since mixed-flow fans are rather similar in appearance to axial designs, they are often termed “semi-axial” fans. In mixed-flow fans, air is drawn into a mixed-flow impeller axially and exhausted diagonally. Mixed-flow fans therefore represent an intermediate solution between axial and radial design. As a result, the mixed-flow fan can generate a higher pressure for the same overall dimensions and speed than an axial fan, although it cannot achieve the pressure values of a radial fan.

By considering the physical laws for transferring model measurement results to similar versions (termed “similarity mechanics”), characteristic fan curves may be represented in a dimensionless manner. The pressure increase and the flow rate are referred appropriately to the rational velocity u at the perimeter, the outer diameter D of the impeller, and the density p of the fluid medium resulting in the dimensionless parameters “pressure figure”

The parameters are also particularly suited for comparing versions of different designs, dimensions and speed with one another. Figure 3 illustrates this comparison for typical characteristic curves of the various designs, making the special advantages apparent. Particularly appropriate for application are: 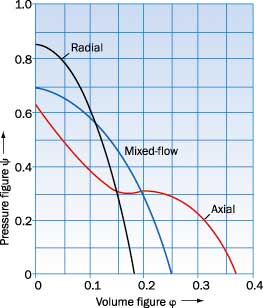 Since many electronic units are located in the immediate vicinity of operating personnel, noise emissions should be as low as possible. The fan used must be optimized to reduce intolerable noise. For these reasons, the noise performance represents a device criterion for selecting a fan.

Since the sound pressure level varies with the distance and direction to a device, its suitability as magnitude for judgement is only limited. By contrast, the sound power level comprises entire sound emissions; the procedure for determining this level from sound pressure measurements is contained in the German DIN 45635 Part 38.

The sound radiation of a fan changes with its operating state, so that the DIN sound power level is only conditionally indicative for applications in which the fan does not operate under optimum conditions. The above mentioned pressure chamber enables the sound pressure level to be determined in relation to the pressure increase or the flow rate resulting in a “characteristic acoustical curve” of the fan.

Figure 4 depicts this characteristic for an axial fan and a radial fan, whereby the sound pressure level measured at a distance of 1 m from the intake side of the fan is depicted as a function of the flow rate. 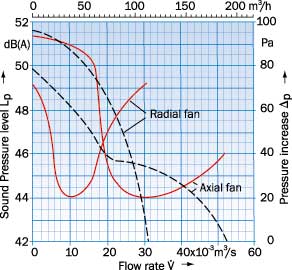 Figure 4. Sound pressure level characteristic; comparison between axial and radial fan.For axial designs, a sharp increase in noise is particularly noticeable when the flow rate is excessively restricted. The axial fan enters as operating range in which the air flow no longer follows the contour of the impeller hub, resulting in additional noise.

For cooling of electronics devices, besides less relevant types of fans, three major types of fans are used: Axial, Radial and Mixed-Flow. The appropriate applications for these three types are the following:

The differentiation between these types, depending on flow rate and pressure increase, can be made with the help of the dimensionless parameters.

The ideal blade geometry, based on the specific flow rate, pressure increase and rpm of rotor, is usually designed by a computer. For this point of operation and the ideal blade geometry you can achieve the highest aerodynamic efficiency. This point of highest aerodynamic efficiency matches approximately the point of minimal noise generation. For this reason the smallest noise generation can only be achieved for the given point of operation.

We still have a headache with Arrhenius
Next Post »

Sponsored by Master Bond As advances in epoxy and silicone materials constantly evolve, manufacturers of advanced electronic systems will find that … END_OF_DOCUMENT_TOKEN_TO_BE_REPLACED

Statistical analysis is needed because data always have some degree of uncertainty; a value that we determine from a single measurement, or … END_OF_DOCUMENT_TOKEN_TO_BE_REPLACED