The challenge of accurately predicting junction temperatures of IC components
in system-level CFD simulations has engaged the engineering community
for a number of years. The primary challenge has been that near-exact
physical models of such components (known as detailed thermal models,
or DTMs) are difficult to implement directly in system designs due to
the wide disparity in length scales involved, which results in large computational
inefficiencies. A compact thermal model (CTM) attempts to solve this problem
by taking a detailed model and extracting an abstracted, far less grid-intensive
representation that is still able to preserve accuracy in predicting the
temperatures at key points in the package, such as the junction.
The article will discuss the concept and utility of compact thermal models
and illustrate their use by designers in industry.

The Importance of Thermal Modeling

Simulation tools for the thermal modeling of semiconductor packages have
now become routine in most design processes. From early spreadsheet-type
tools that were in vogue a couple of decades ago, many designers now use
sophisticated FEA (Finite Element Analysis) or CFD (Computational Fluid
Dynamics) tools, and interface their mechanical CAD data directly into
their analysis. Modeling is seen as a necessary step, especially at the
early stages of thermal design, during which feasibility studies can narrow
the spectrum of possible design choices. Modeling is also used at later
stages of the design primarily for verification and design optimization.
Before we focus on the role of compact modeling in the thermal analysis
world, it is important to understand what a compact thermal model of a
semiconductor package is, and how it relates to the more fundamental detailed
thermal model.

What is a Detailed Thermal Model?

A DTM is a model that attempts to represent or reconstruct the physical
geometry of a package to the extent feasible. Thus the detailed model
will always look physically similar to the actual package geometry. Constructing
a DTM in a thermal analysis tool is aided by integration with mechanical
CAD data of the part. A properly constructed detailed model is, by definition,
Boundary Condition Independent (BCI); i.e., the model will accurately
predict the temperature at various points within the package (including
junction, case, and leads), regardless of the cooling environment in which
it is placed.

DTMs are suitable for use in the simulations of designs in which the
number of packages is few. For example, typical package thermal characterization
problems � such as calculations to extract qja
(junction-to-air thermal
resistance) or qjma (junction-to-movingair
thermal resistance) � fall under this category. However, DTMs are not
feasible for simulations of sub-systems or system-level computations,
which involve a large number of semiconductor packages. This is because
the computational resources required for solving such large problems would
be excessive if each package was represented by a DTM. These are precisely
the applications where a CTM should be used.

What is a Compact Thermal Model?

A CTM is a behavioral model that aims to accurately predict the temperature
of the package only at a few critical points � e.g., junction, case, and
leads � but does so using far less computational effort. A CTM is not
constructed by trying to mimic the geometry and material properties of
the actual component. It is rather an abstraction of the response of a
component to the environment it is placed in. Most CTM approaches use
a thermal resistor network to construct the model, analogous to an electrical
network that follows Ohm�s law. The most popular types of CTMs in use
today are two-resistor and DELPHI.

The junction-to-case resistance (qjc)
is normally derived from a “top cold plate test”, in which the
package is placed on a board with all sides insulated except the top surface.
A cold plate at a specified temperature is pressed against the top surface.
Hence, most of the power dissipated from the package leaves through its
top (isothermal) surface. The one-dimensional equivalent of Fourier’s
law is then applied to derive qjc.
Thus,

The junction-to-board resistance (qjb)
is derived by placing the package in a specially constructed harness known
as the “ring cold plate.” The ring cold plate (Figure 2) fixture
consists of a 4-layer PCB (defined as in the reference document JESD51-7)
inserted between two cold plates. The cold plates are in the shape
of a ring. Thus heat travels from the package through some distance within
the board and then out of the fixture through the coolant fluid in the
cold plate. 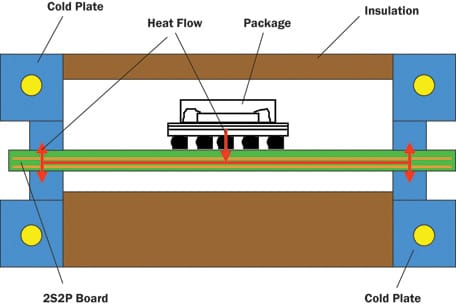 Rjb is calculated by using the one-dimensional version of
Fourier’s law:

The board temperature (Tb) is taken as the temperature at
a point on the board surface located in the middle of the longest side
of the package, no more than 1 mm from the package edge for an area array
package and on the center lead foot for a surface-mount leaded package.

A two-resistor model has the following advantages:

DELPHI CTM
The challenge of compact modeling is to devise a generalized methodology
to generate a BCI CTM. To that end, the DELPHI [2] consortium, primarily
made up of a number of end-user companies, concluded an ambitious publicly
funded research project that led to the first comprehensive methodology
for the generation of BCI compact models. One of the key advantages of
the DELPHI methodology is that it is non-proprietary and vendor/tool independent.
The DELPHI project was followed by the SEED [3] project, in which component
suppliers evaluated the DELPHI methodology and found that it could be
used satisfactorily as a predictive tool for junction temperature. 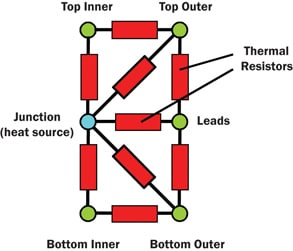 The resistor network is derived from a step-by-step simulation
and statistical optimization process that minimizes the error in junction
temperature and heat flux over a wide spectrum of environments, such as
high/low conductivity PCB, bare package, package with heatsink, natural
convection cooling, and fan cooling. The end result is a CTM that provides
a predictive accuracy of junction temperature and major fluxes to within
10%; a major improvement over the accuracy of a two-resistor model.

DTM
A properly constructed DTM will provide the best prediction accuracy for
all application environments. However, the computational efficiency of
DTMs is low. Therefore, they find the widest use among semiconductor manufacturers
for:

DTMs, in general, are not suitable for use in board-level or system-level
design and exploring what-if scenarios that involve multiple packages.

Two-Resistor CTM
A two-resistor CTM can be used by system integrators and semiconductor
manufacturers to simulate designs with more than a single package on one
or multiple PCBs. Currently, two-resistor CTMs are the most widely used
among all CTMs.

Studies have indicated that the predictive accuracy for junction temperature
for two-resistor CTMs is about 30% or less. In cases where the heat is
predominantly going into the board or a heatsink, and when internal heat
spreading within the package is not large, the predictive accuracy will
be much higher. Two-resistor models also produce a higher accuracy for
parametrics; i.e., the difference in temperature between two variations
in cooling solutions for the package will tend to be more accurately predicted
than the absolute values of the temperatures.
Incidentally, it is important to note that the accuracy of prediction
of the case temperature is likely to be worse than the junction temperature,
especially in plastic or “glob-top” type of packages. This is
because the mold compound surface has a significant gradient of temperature,
and representing the top as a single node tends to average this temperature
out.
Thus it is advisable to use two-resistor models during the initial design
phase to predict approximate values of junction temperature and values
of the neighboring air temperature (local ambient). In later stages of
design, these models can be used to explore parametrics. Two-resistor
CTMs are sometimes the only option if the consumer of the model cannot
simulate a more complex CTM in their tools.Two-resistor CTMs should generally
be avoided for the prediction of case temperatures.

DELPHI CTM
High predictive accuracy, portability, and computational efficiency make
DELPHI CTMs the most suitable for wide dissemination from semiconductor
manufacturers to system integrators. Their BCI properties allow designers
to use them with a high degree of confidence for predicting junction temperature
and heat fluxes.
Typical junction temperature errors compared to the DTM do not exceed
5%. (It should be noted that small additional errors can be introduced
in this comparison because of the difference in the airside grid used
between the two simulations in practical situations.)
DELPHI CTMs are ideal for representing packages in board-level or system-level
simulations involving a large number of packages in which accurate temperature
and flux data is desired. If available, they should always be used in
preference to the two-resistor CTM.

DTMs are currently used widely by semiconductor manufacturers for package
characterization and design.
Two-resistor CTMs have a long history of usage in aerospace/defense applications,
but in the last one or two decades this has extended to the other sectors
of the electronics industry. One continuing barrier to their universal
usage is the lack of èjb data from some semiconductor manufacturers.
It was a key vision of the DELPHI project that a supplier of electronics
components would not only deliver to its customer a product, but also
a CTM. When used in this manner, DELPHI CTMs have proven to be highly
successful in the accurate prediction of package thermal performance in
many design situations.
The drawback of DELPHI CTMs is the fact that not all semiconductor manufacturers
have made them available for their parts catalog. DELPHI CTMs still have
some way to go before they are adopted universally. However, this situation
is changing – one particular software vendor [4] reported that 35%
of all CTMs generated from their tools were DELPHI CTMs in 2006. Software
vendors too have a key responsibility in this regard to make the DELPHI
methodology widely available in their tools so that
industry can adopt them quickly.

Standardization procedures for both two-resistor and DELPHI CTMs are
in their advanced stages in the JEDEC industry standards committee. Work
is also underway for extending the CTM concept to transient situations,
i.e., Dynamic Compact Thermal Models (DCTM). A universal methodology for
this is not yet available, but several methods have been proposed by researchers.

Thermal modeling is now an integral part of the electronics design process.
In recent years, new thermal modeling methods have been proposed that
seek to predict temperatures and fluxes of packages with varying degrees
of accuracy and computational efficiency. These methods are being widely
used in the industry, although some important barriers to their universal
adoption remain. The JEDEC industry standards committee is engaged in
standardizing some of these methodologies.

Sponsored by Master Bond As advances in epoxy and silicone materials constantly evolve, manufacturers of advanced electronic systems will find that … END_OF_DOCUMENT_TOKEN_TO_BE_REPLACED