For almost 10 years now, the increasing heat loads in data centers have been recognized as a growing problem [1]. One of the approaches that has been effective in attacking this problem is the introduction of a water-cooled heat exchanger at the rear of a rack [2-5]. Using this approach, a part or nearly all the heat load absorbed by air passing over the heat dissipating electronics is transferred to water, which can carry the heat away much more efficiently than air. It also significantly reduces or eliminates the problem of hot air recirculation [6].

where cp is the specific heat of water. The same equation would apply to a water-to-water heat exchanger as is used in some applications [5] to reject heat from system cooling water to customer side cooling water.

One way we could estimate extreme upper and lower bounds on the heat load measurement is to combine the upper and lower extremes of our measured values in equation [1]. However, to do this we must have some knowledge of the tolerances on our measured flow rate and temperatures. Again, for purposes of illustration, let us assume that the tolerance or uncertainty in the flow rate measurement is +/- 1.89 liters/minute (+/- 0.5 gpm) and the tolerance on the inlet and exit water temperature measurements is +/- 1oC.

in which the constant a is equal to wcp/G and G is the water flow rate in liters per minute. For water, the constant a, will have a value of 69.35 W/liter/min/oC.  The Δ quantities are the tolerance on measured flow rate and temperatures.

In a similar manner, the lower limit on the measured heat load is given by

Entering the assumed measured values of water flow rate (75.7 liters/minute), inlet and outlet temperatures (25oC and 28.8oC) and their respective tolerances, we calculate a maximum value of heat load of 31.2 kW and a minimum value of 9.2 kW compared to the nominal value from equation [1] of 20.0 kW. Clearly, these limits are extreme values and we would not expect the possible variations in our measurements to gang up on us in so malicious a manner. Nonetheless, we are left to wonder how we might obtain a more reasonable estimate on the likely bounds on our heat load measurement. 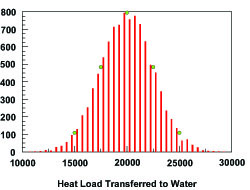 To do this, we must make a brief venture into the world of statistics. As we all know, just about anything we produce, or measurement we make, will exhibit some variation about a mean (or nominal) value. The distribution of these values about the mean quite often follows a normal distribution. A normal distribution is characterized by two parameters – its mean (µ) value and standard deviation (σ). The mean is simply the average value of the total population of values constituting the distribution. The standard deviation is a measure of how spread out or narrow the distribution of values in the population is. Mathematically, the standard deviation is the square root of the variance (σ2), which in turn is the average value of the squared differences from the mean.

However, what we need to find is the standard deviation, σq on the heat load, σq , as calculated using equation [1] and the nominal measured values of flow rate, G , and temperature, Twi and Two.  To do this we will use a modified form of equation [1] to calculate the mean or nominal heat load

Then after applying the mathematical rules for combining products and difference of random variables and some algebraic manipulation, it can be shown that the variance and standard deviation of the measured value of heat load is

where ΔT is the difference between the measured water temperatures Two and Twi. Entering the various values under discussion in equation [7], the calculated standard deviation of the heat load measurement is 2480 W. Since two standard deviations would capture 95 % of the population, it would be reasonable to conclude that the true value of heat load is most likely within the range of 15 to 25 kW, compared to a range of 9.2 to 31.2 kW calculated using the min and max equations [2] and [3].

In order to check the validity of equation [7], a Monte Carlo simulation was set up to model equation [1] statistically. To do this, a nominal set of values is selected to simulate measured flow rate, inlet water temperature and exit water temperature that would give a particular value of heat load (in this case 20 kW). Then the standard deviation of each of the assumed measured values is used in concert with a random number generator and the assumed probability distribution (in this case a normal distribution) to generate random measurement values to enter in equation [1] to create a randomly generated value of heat load. This is done many times (in this case 10,000 times) to create the distribution of measured heat load values. The distribution obtained for the example under consideration is shown in histogram form in Figure 2. The vertical axis displays the number of occurrences of the heat load values displayed on the horizontal axis. The standard deviation, sq, on heat load can be calculated from the total population or set of calculated heat load values using

where qi are all the calculated values of q, is the average of all these values and n is the population size which is the number of Monte Carlo runs.

To demonstrate the validity of equation [7] numerically, Monte Carlo simulation runs were made over a range of standard deviations in temperature measurement (0.1, 0.5 and 1oC) and in flow measurement (0.38, 1.89 and 3.78 liters/minute) and the corresponding standard deviations in the simulated measured heat load was calculated. The simulation was based upon a heat load of 20 kW and a water flow rate of 75.7 liters/minute as discussed earlier in this article. A similar set of calculations was made using equation [7]. A comparison of the standard deviation values obtained by each method is shown in Table 1. From Table 1 it can be seen that the standard deviation calculated from the Monte Carlo simulation results and equation (7) are very nearly the same, differing at most by less than 1.5%.

Thus equation (7) can be very helpful in evaluating the effect of flow and temperature measurement uncertainties on the uncertainty in measurement of heat load on a heat exchanger, as well as to provide upper and lower bounds on the probable value of the heat load measurement.

Thermal Facts and Fairytales: Consistency and Accuracy in Simulations

Sponsored by Master Bond As advances in epoxy and silicone materials constantly evolve, manufacturers of advanced electronic systems will find that … END_OF_DOCUMENT_TOKEN_TO_BE_REPLACED