where, κ is the Thermoreflectance Coefficient

The purpose of this paper is to provide a better understanding of how κ, the Thermoreflectance Coefficient, varies with respect to:

Processing Technique: For any given material, the Thermoreflectance Coefficient is not a strong function of surface preparation or the deposition process. Calibration for each device under test therefore, is generally not required. This differs from IR thermography where the emissivity can change substantially and as a result, must be calibrated each time to obtain accurate temperature data. The Thermoreflectance Coefficient of gold prepared by various thermal or e-beam evaporation techniques was measured and always showed consistent values. On the other hand, if there is a significant difference in the visual color of the material due to major microstructures, porosity variations, or surface oxidation, the Thermoreflectance Coefficient can be affected significantly.

Dielectric Coatings and Passivation Layers:Dielectric coatings or passivation layers will change the reflective properties and thus the Thermoreflectance Coefficient. Due to optical interference in thin layers, oscillations in the thermoreflectance signal can be observed. For these cases, if there are adjacent coated and uncoated regions on the sample, one can use temperature continuity on the surface to calibrate the 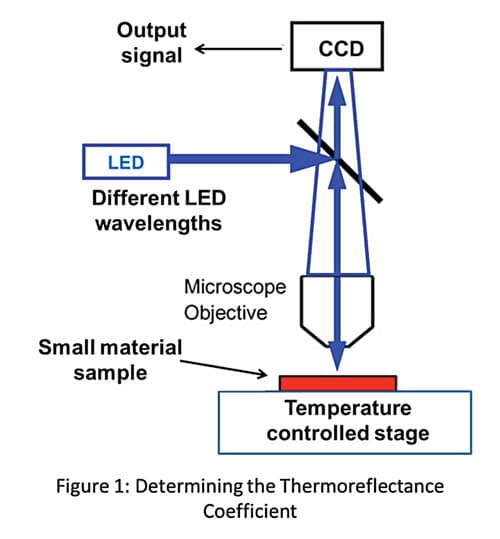 thermoreflectance coefficient. If this is not feasible, the Thermoreflectance Coefficient needs to be determined. This can be done by mounting a sample with small thermal mass on a temperature-controlled stage and measuring the change in reflected signal versus temperature (Fig. 1).

Multiple temperature cycles and averaging are necessary to obtain good signal to noise ratio. Conducting the experiment with different illumination wavelengths simplifies the analysis as optical interference peaks are shifted and one could use the envelope of the measured signal to extract the temperature profile.

The following table lists the recommended LED wavelength for typical materials to obtain near optimal values of the Thermoreflectance Coefficient. Note that two alternatives are shown for gold, one for the positive peak and one for the negative peak. Two sources are also indicated for Nickel and Titanium since the peak values for both of these materials are quite broad.

For other material systems, one can easily extract the Thermoreflectance Coefficient if there is an embedded temperature sensor on the chip near the region of interest. The calibration procedure entails heating the entire chip uniformly using an external thermal stage. The thermoreflectance change across the full sample is recorded by the CCD while the temperature is measured simultaneously with the sensor. The calibration image and sensor measurements are correlated to produce values for the Thermoreflectance Coefficient for each region-of-interest on the chip.

In the absence of a temperature sensor, the Thermoreflectance Coefficient can be determined in the manner described earlier, using a sample of the chip with a small thermal mass (e.g. 1×1 mm2 up to 1×1 cm2 die) so that the temperature can be cycled.

The magnitude of the Thermoreflectance Coefficient also has a dependence on the numerical aperture of the microscope objective used in the imaging [4]. This is due to the component of the light polarized perpendicular to the surface which can be non-negligible for high numerical apertures, e.g. NA > 0.5. The spatial resolution is known to be determined by the following expression:

where λ is the wavelength of the illumination source, n is the index of refraction (1.0 for air), and θ is the half-angle of the cone of light exiting the microscope lens. The component n∙sin(θ) is called the Numerical Aperture (NA) and is dependent on the optics and objectives of the microscope.

The above relationship is shown in Fig. 3 for wavelengths up to the near infrared (NIR) range.

For precise measurements of temperature distribution with a high NA lens, it is recommended to:

b) Without changing anything in the device, change the lens to higher NA and scale the temperature data accordingly.

This approach works when relatively large areas of the sample surface are available for imaging (e.g. 50-100 microns diameter). If the region of interest is very small and only visible with a high NA lens, then direct calibration on a temperature-controlled stage is necessary. Since small changes in the stage temperature can defocus the image seen by a high NA lens due to the thermal expansion of the sample, autofocusing during calibration is required.

Sponsored by Master Bond As advances in epoxy and silicone materials constantly evolve, manufacturers of advanced electronic systems will find that … END_OF_DOCUMENT_TOKEN_TO_BE_REPLACED