The Parker Solar Probe is defying common sense and pushing the limits of thermal performance via innovative design as it loops and approaches to within just a few million kilometers from our Sun.

Thermal management in outer space is hard, that’s not news. Even after the heat has been conveyed by conduction to the outer surface of the spacecraft, there’s only radiation as a mechanism for getting that heat “away.” Making it worse, depending on the location of the spacecraft and its orientation, the Sun’s energy may be heating up the craft and so adding to the heat load being dissipated by the internal electronics. Nonetheless, the problem can be solved via a variety of techniques, as the many successful space probes and missions have proven.

Even apparently “normal” cooling is a problem. In the insightful book “Packing for Mars,” Mary Roach tells of a modest situation on the International Space Station. The ISS has a fairly normal air atmosphere, so you might think that convection cooling of the electronics is routine and feasible – but it is not. Yes, the electronics does heat the surrounding air as expected, but the air is weightless and so there is no natural convection (heated air rises, but there is no up or down in a weightless environment).  As a result, the heated air “hangs around” enveloping the heat source on all sides, and actually makes the situation worse. Therefore, active cooling using fans is needed to get the stagnant heated air to move away from the source.

But what happens when the entire point of a mission is to head towards our Sun? Talk about a cooling challenge! Yet it is being done, via the Parker Solar Probe (PSP), Figure 1, which launched successfully on August 12, 2018 on a tightly focused mission: get close to the Sun over a multiyear period, making 24 orbital passes while collecting data using five-onboard instruments and continuously sending that data back to Earth, Figure 2. So far, the PSP probe has been a complete success and has already made two close-in passes to the Sun; in November 2018 it skimmed by just 15 million miles (about 25 million km) from its surface. 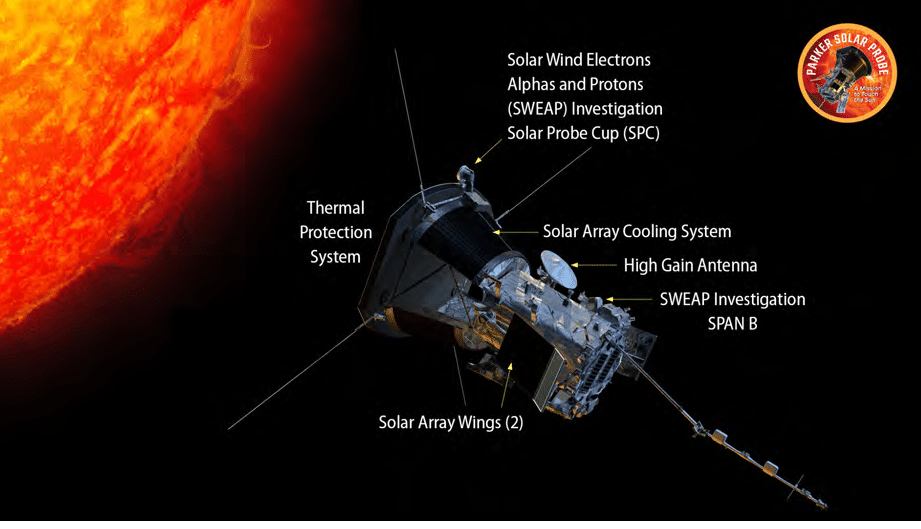 Designing this probe brought unique thermal-management and related challenges along the lines of “are you out of your minds?” Being so close to the Sun to damage to its solar cells from particles in the vicinity which are accelerated by the Sun’s gravity, and from intense UV solar radiation. The idea of somehow keeping the probe cool enough to function even as temperatures reach thousands of degrees called for a new class of thermal solutions with innovative design, implementation, and test strategies.

The numbers tell the story: At the probe’s closest approach, about 6 million km (about 3.7 million miles) from the sun’s surface, solar irradiance is about 650 kilowatts per square meter, almost 500 times its value at the Earth’s orbital distance. The cooling system has to handle about 5500 watts of heat load on its solar wings which hold the solar cells. The heat shield is made of a lightweight yet stiff high-temperature carbon-composite foam which did not exist until the late 1990s – but shielding alone is not enough in this situation,

In brief, what the designers did was to devise an active cooling system somewhat similar to a car’s radiator subsystem, including a pump to ensure coolant flow. While simple in principle, it’s obviously not so in practice. There’s even an ironic issue of the fluid freezing and its pipes bursting in the first hour after launch and when the unit is in the shadow of Venus a brief time later until the Sun’s rays warm it up, so the coolant had to be preheated to 50°C before launch.

Obviously, this project requires extensive multidimensional simulation, and its results showed the design should work. But simulation is not necessarily reality, and the team built a facility with 80 sets of adjustable mirrors in a heliostat arrangement which could test the design in a vacuum, as any airflow would invalidate the results.

There’s much more to this story, and it is clearly told in a recent article in IEEE Spectrum, “How the Parker Solar Probe Survives Close Encounters With the Sun.” Rather than being written by a well-intentioned journalist trying to capture the engineering reality (sorry, all you journalists out there) it is authored by four principle members of the project team at the Johns Hopkins University Applied Physics Laboratory. They fully and clearly capture the complex nature of the challenge, unique subtleties they had to grasp and overcome, and the inevitable compromises they had to make. The NASA and Johns Hopkins sites also have some very good project-overview information including a fairly technical Press Kit; see the links below.

In some ways, the Parker Space Probe story is reminiscent of the Greek mythology and well-known story of Icarus, who attempted to escape from Crete using wings constructed from feathers and wax. Icarus’ father warns him not to fly so low that the sea’s dampness will clog his wings, nor too high where the sun’s heat will melt them (of course, we know that flying higher would actually be cooler due to the thinness of the air, while the trivial  additional closeness to the Sun is irrelevant here). In the myth, Icarus ignores his father’s instructions, he flew too high, his wings melted, and he tumbled out of the sky and into the sea.

But the story of the PSP is actually more analogous to the “Relics” episode (Season 6, Episode 4, October 1992) of “Star Trek: The Next Generation” where the Enterprise is inadvertently trapped inside a Dyson sphere and is being pulled inexorably towards the sun of that sphere, with its hull reaching several thousand degrees and about to burn. Fortunately, Chief Engineer Montgomery Scott (“Scotty”) – who has been brought back to life after being stuck in an old, derelict starship’s transporter pattern-buffer for 75 years – and chief engineer Geordi La Forge, who are in another ship outside the Dyson sphere, devise a clever and daring multistep-rescue plan for the boiling Enterprise.

That’s the scenario I see for the brilliant engineering of the Parker Space Probe, as it overcomes any “it just can’t be done” thinking.

Sponsored by Master Bond As advances in epoxy and silicone materials constantly evolve, manufacturers of advanced electronic systems will find that … END_OF_DOCUMENT_TOKEN_TO_BE_REPLACED